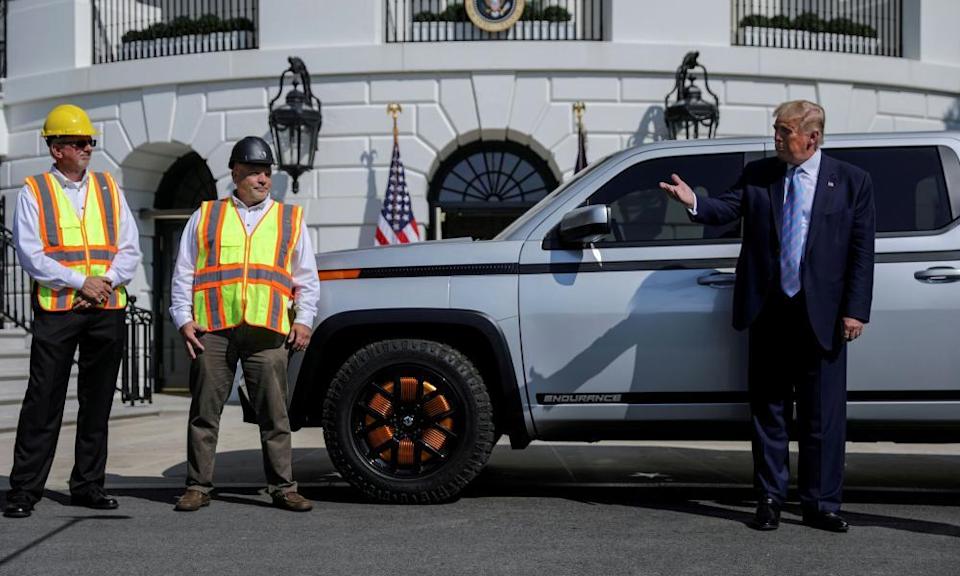 It’s less than a year since Lordstown Motors was touted as the future for the Youngstown, Ohio, the once thriving steel and manufacturing city that has struggled to reinvent itself in the post-industrial age.

The company and its Endurance all-electric pickup truck were seen as saviors for Youngstown after General Motors pulled the plug on its nearby Lordstown plant. “It’s booming now. It’s absolutely booming,” said Donald Trump in September, during an unveiling of the Endurance truck at the White House.

Now those hopes are fading as Lordstown Motors faces financial difficulties that have locals worried, once again, about the region’s financial future.

“It’s a very sad moment in the history of Youngstown. It seems every five years that hope is just over the horizon and somebody just closes it up and it disappears,” said Bob Hagan, who represented the Youngstown area for nearly three decades in the Ohio state legislature as an assembly representative and state senator.

General Motors announced plans to shut down five factories in North America in November 2018, including its plant in Lordstown, which employed 1,600 workers and had operated for 52 years. The number of employees had steeply declined since the early 1990s, when more than 10,000 workers were employed at the plant.

In March 2019, the last Chevy Cruze rolled off the assembly line as the plant ceased operations, leaving hundreds of workers forced to retire, transfer to a different GM plant elsewhere in the US, or find other work.

The closure was devastating for residents in Ohio’s Mahoning Valley, as the area has steadily declined from outsourcing and plant closures over the past few decades in the automotive, manufacturing, and steel industries.

General Motors sold the plant to Lordstown Motors for $20m in 2019, and loaned the company $40m.

But hope for a bright electric future soon faded. Since its purchase of the plant, Lordstown Motors has experienced financial and developmental difficulties. The company recently gave a tour of the facility to reporters, analysts and other visitors amid a turmoil of conflicting statements on its outlook, the resignations of its CEO and CFO, and a statement to securities regulators that the company did not have enough funds to start production.

Hagan said these travails are just the latest setback for an area that has taken many hard knocks. Over the past several decades, steel mills and manufacturing plants have shuttered amid broken promises. He fears Lordstown Motors may prove another corporation that came into the area with high hopes and lofty promises – only to let the community down.

“They’re rearranging the chairs on the Titanic,” he said.

“If you talk to the vast majority of us, we are not surprised by all the issues with Lordstown Motors,” said Timothy O’Hara, former president of United Auto Workers local 1112, the union which represented GM Lordstown employees. He worked at the plant for 41 years before retiring.

“Lordstown Motors has been a shaky situation from the beginning. For the economy of the Mahoning Valley I hope it succeeds – but I’m not holding my breath.”

The Lordstown Motors plant currently has about 600 employees, and production is projected to begin at the end of September. But it faces some huge hurdles. In a statement filed with the SEC, the company said its success hinges on “its ability to complete the development of its electric vehicles, obtain regulatory approval, begin commercial scale production and launch the sale of such vehicles” – all as it seeks additional financing before it’s projected to run out of funds by May next year.

Elected officials have bet heavily on the success of Lordstown Motors in the area. In December, the Ohio Tax Credit Authority approved a state tax credit for the company estimated to save $20m in payroll taxes, based on its promise to create 1,570 full-time jobs. Ohio’s private economic development agency, JobsOhio, has pledged $4.5m in grants to Lordstown Motors. In April last year, the company received more than $1m through a federal pandemic loan to retain 42 jobs.

But Hagan believes the money may not be enough and, once again, it will be the people of Youngstown who pay the price.

“Tax dollars are being used to lure people into our community. We have to have elected officials be more vigilant on how organizations are taking money and make sure they deliver,” he said.