When was the last time you invested in a company that’s been around (in one form or another) since 1847? It’s amazing to consider the iconic status of Cleveland-Cliffs (NYSE:CLF). Even to this day, CLF stock remains immensely popular among financial market traders. 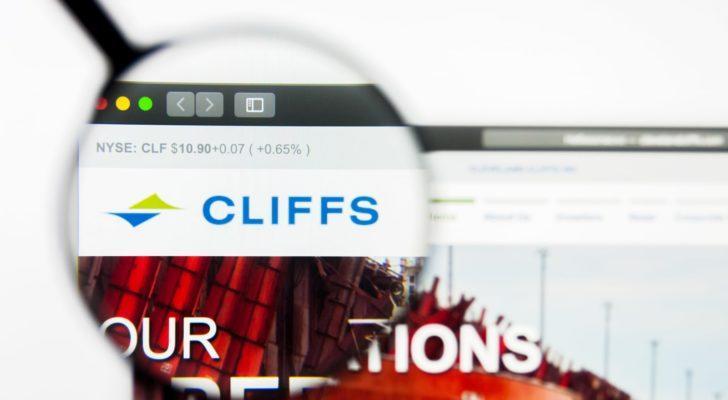 But what about CLF stock? My contention is that while the company’s a steel-mining mainstay, the stock itself isn’t necessarily appropriate for risk-averse investors.

So, let’s put our helmets on as we drill down on the king of steel, which is often traded with zeal.

A Closer Look at CLF Stock

I wasn’t just flippantly rhyming there, as the zeal is real: more than 20 million CLF stock shares change hands during a typical trading session.

So apparently, traders aren’t fazed by the stock’s rather high five-year monthly beta of 2.27.

This indicates that Cleveland-Cliffs shares have historically moved at least twice as fast – in both directions, mind you – as the S&P 500.

That’s serious volatility, and it’s a reason for more cautious investors to keep their position sizes in CLF stock small, if they choose to take a position at all.

Another concern has to do with Cleveland-Cliffs’ trailing 12-month earnings per share, which is -7 cents.

That’s not deeply negative for a stock that was trading at $22 and change on July 2. Still, the stakeholders will definitely want to see the per-share earnings turn positive in the near future.

I have to hand it to InvestorPlace contributor Dana Blankenhorn. The man definitely knows how to grab my attention.

Not long ago, Blankenhorn enjoined his readers to “Forget lithium-ion batteries, vaccines and cloud applications.”

In case that didn’t slap you in the face hard enough, he then declared that “The new speculative game is rolled steel.”

With the U.S. House of Representatives recently passing the Invest in America Act, American Iron and Steel Institute President and CEO Kevin Dempsey commended the government’s apparent commitment to using American steel to fix the deteriorating roads and bridges.

Moreover, Dempsey applauded the bill’s “provisions to ensure that the steel products purchased through the EPA’s State Revolving Fund programs for wastewater and drinking water projects be made in the United States.”

Come to think of it, maybe an investment in Cleveland-Cliffs isn’t so speculative, after all.

Maybe the government will actually work together to bolster steel-supportive infrastructure initiatives.

Or perhaps that’s a pipe dream (sorry, the puns are unintentional), but it’s at least worth considering.

No Need for Memes

Okay, so there’s an elephant in the room that I can’t just ignore. CLF stock could be targeted for a moon shot by Reddit’s short-squeeze enthusiasts.

Thankfully, there’s more to the story than meme-worthiness.

Furthermore, the company revealed its expectation of $1.3 billion for Cleveland-Cliffs’ second-quarter 2021 adjusted EBITDA.

For the full second-quarter 2021 earnings results, you’ll have to wait until July 22.

Nevertheless, so far the outlook remains bright – and investors can bypass the memes when there’s data to support a long position.

So, is rolled steel the new speculative game?

CLF stock will, most likely, continue to be risky. The company is long-established, but the stock can’t sit still for long.

But also prepare for a possible renaissance in American steel – rolled or otherwise – as the catalyst that could take CLF stock to the next level.