The top U.S. financial regulators convened on Monday to expand discussions on a regulatory framework for stablecoins, a type of digital currency that bills itself as a less volatile asset class than other cryptocurrencies.

Treasury Secretary Janet Yellen held a meeting with five federal regulatory agencies to discuss the “rapid growth” of stablecoins, according to a Treasury readout of the meeting Monday afternoon.

The nation’s top regulators acknowledged the potential for stablecoins to be a useful means of payment, but advocated for setting up guardrails to protect stablecoin users, the financial system, and national security.

“The Secretary underscored the need to act quickly to ensure there is an appropriate U.S. regulatory framework in place,” the Treasury reported.

The officials were briefed by Treasury staff on a forthcoming report on stablecoins, which will include recommendations for addressing “any regulatory gaps” in the current regulatory framework.

Whereas many cryptocurrencies are not backed by a specific asset, stablecoins tie their values to one or more other assets, such as sovereign currencies. One selling point for stablecoins: facilitating cross-border payments.

Stablecoins have been growing in popularity, taking some steam out of prime money market funds. The concern is that if left unregulated, stablecoins may be riskier than advertised. 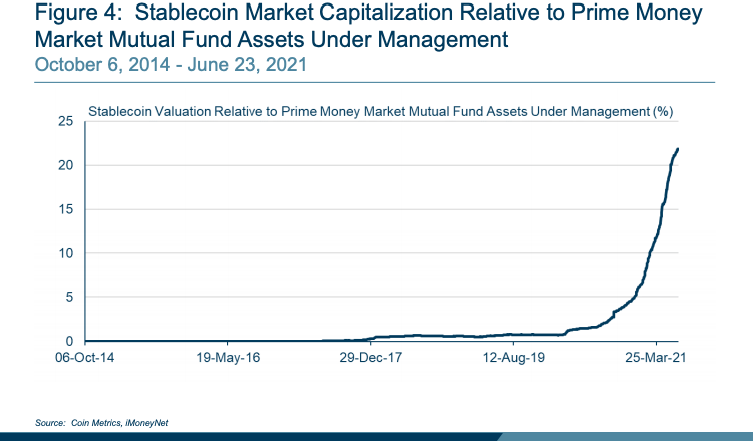 A chart from the Boston Fed, using data from Coin Metrics and iMoneyNet, notes that stablecoins have been growing in popularity against prime money market mutual funds. Source: Federal Reserve Bank of Boston

In a December 2020 statement, regulators said they wanted to encourage “responsible payments innovation.” But the statement also raised concerns over the possible financial stability risks that could come from “large-scale, potentially disorderly redemptions” on stablecoins.

If stablecoins continue to attract attention away from money market funds, short-term credit markets could be exposed to any stablecoin event.

“I think we have a tradition in this country where [if] the public’s money is held in what is supposed to be a very safe asset, we have a pretty strong regulatory framework,” Fed Chairman Jerome Powell told Congress last week.

The regulators in December proposed reserve requirements to ensure stablecoin liquidity. The regulators also emphasized that stablecoins must comply with all relevant laws concerning anti-money laundering and countering the financing of terrorism measures.

“Bringing together regulators will enable us to assess the potential benefits of stablecoins while mitigating risks they could pose to users, markets, or the financial system,” the Treasury noted last week when it publicly announced the Monday meeting.