The year isn't even half over yet, but it's already been a memorable 2021 for market watchers.

The GameStop (GME) and meme stock drama, the latest bull cycle in cryptocurrencies, and Elon Musk tweeting have all created off-the-wall storylines that keep getting refreshed.

And while some — if not most — of this is just noise for investors who are trying to build wealth over the long run, here at Yahoo Finance our data on tickers users are looking up give us a great read on how engaged readers and viewers have been on some of these trends.

And the data leave no doubt: people are still crazy about crypto, Elon, and meme stocks.

Yahoo Finance's Jared Blikre spun up some data on Thursday that showed the most popular tickers on Yahoo Finance over the last four weeks. And perhaps it's no surprise that the top ticker over the last month has been Dogecoin (DOGE-USD).

Over this period, Elon Musk tweeted many times about Doge (including again on Thursday), hosted SNL and talked about Doge, and Federal Reserve Chair Jerome Powell was asked about Doge. Notably, the price of Doge is only up about 25% over the last month with most of Doge's big rally coming in early- to mid-April when the price rose from around $0.06 to $0.40 and eventually as high as $0.73. As of Thursday, Doge was trading near $0.40. As a reminder, Dogecoin is a joke. Explicitly.

Two out of the next three tickers come to the Morning Brief as a little bit of a surprise — second-most popular in the last four weeks is AMC (AMC) while fourth-most is GameStop. Bitcoin (BTC-USD) is sandwiched between the two as the third-most popular ticker on Yahoo Finance over the last month.

AMC and GameStop were no doubt the center of the action in the initial wallstreetbets, short squeeze, Robinhood drama of late January. GameStop shares, which traded in the mid-to-low single digits a year ago, have traded in a range between $150 and $180 over the last month. Overall, the stock is up 3% in the last month.

The story at AMC has been a bit more volatile, with shares trading between $9 and $14, rising about 25% in the last four weeks. But the name has remained a favored topic for retail investors, and data from Youyang Gu shows the stock has been among the most popular tickers on wallstreetbets over the last 60 days alongside GameStop and, of course, Tesla (TSLA). It follows that the fifth-most popular ticker over the last four weeks on Yahoo Finance has indeed been Tesla.

Rounding out the top 10 are Ether (ETH-USD), Apple (AAPL), AT&T (T), the Dow (^DJI), and Taiwan-listed Evergreen Marine Corporation (2603.TW). A group that reiterates the interest in crypto, Apple's preeminence in American business, user interest in big mergers, and that the Dow is indeed the people's index. And although that last name might sound unfamiliar to some readers, we suspect that this picture is not. 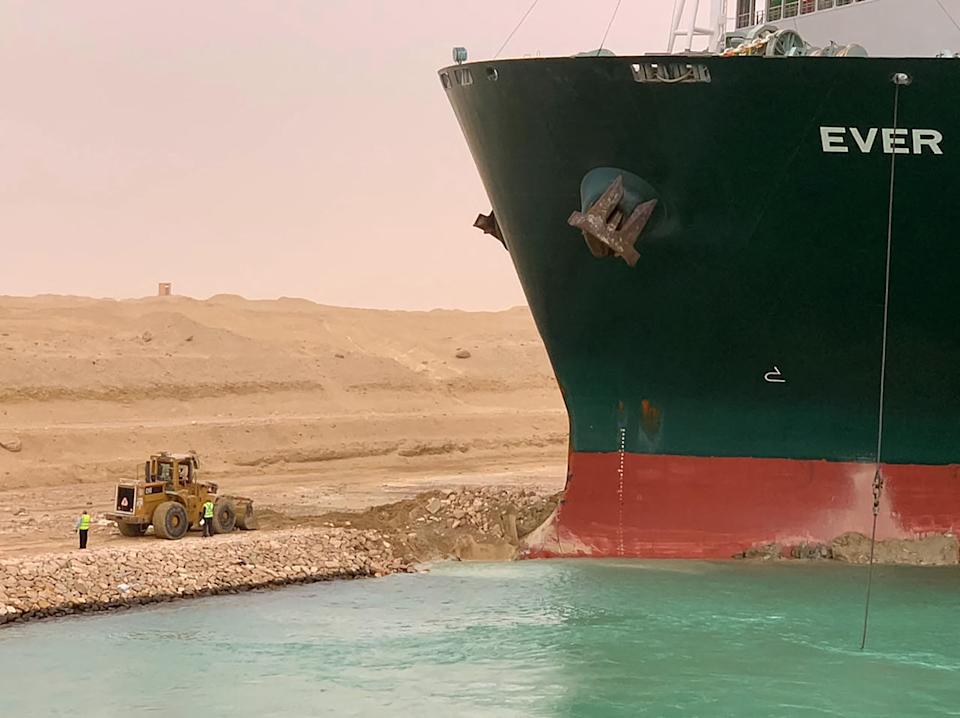 A handout picture released by the Suez Canal Authority on March 24, 2021 shows a part of the Taiwan-owned MV Ever Given (Evergreen), a 400-metre- (1,300-foot-) long and 59-metre wide vessel, lodged sideways and impeding all traffic across the waterway of Egypt’s Suez Canal. (Photo by Suez Canal Authority/HO/AFP via Getty Images)

And while this list will change over time and only shows the buzziest names of late, Jared notes that before the pandemic top tickers on Yahoo Finance were more of a vanilla bunch of big-cap tech names. Maybe more like what we see on our list of tickers most added to user watchlists.

But as we've written many times in the Morning Brief, this a new market with new bids and new interests. And we can't wait to see where these trends flow next.

By Myles Udland, reporter and anchor for Yahoo Finance Live. Follow him at @MylesUdland

Bitcoin falls below $40,000 as BlockFi mistakenly sends $21M worth of coins to users [Yahoo Finance UK]

Ford CEO: It's time for America to be competitive in electric vehicles

Deutsche Bank: 'The value of bitcoin is entirely based on wishful thinking'