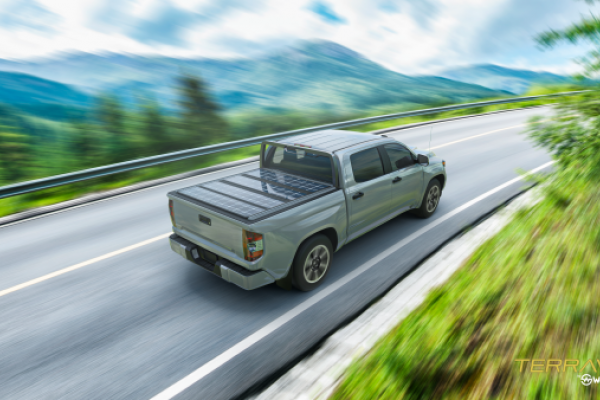 The first wave of EV pickup trucks is on the horizon and is anticipated to take over the automotive industry in the U.S.

Last week, Ford Motor Co. (NYSE: F) previewed its new electric F-150 Lightning pickup, a relatively inexpensive electric version of the most popular vehicle in America, during a visit by President Biden. Ford had taken 20,000 reservations in less than 12 hours since the truck was officially unveiled.

Although there are plenty of pros to owning an EV pickup truck, range anxiety is a common concern among many.

To get the maximum EV range possible, the concept of adding solar panels to tonneau covers or truck bed covers seems like the natural next step. But, this hasn’t materialized in production yet.

The TerraVis solar tonneau cover system consists of four monocrystalline foldable solar panels that have an output of approximately 1kW.

The system should be able to add 12 to 15 miles (20 to 24 km) of range to an electric pickup truck, which is 30% of the power needed for the average daily commute under optimal conditions.

The company has already forged original equipment manufacturer (OEM) supply partnerships with two EV Truck nameplates, one of which is in partnership with Nissan.

The TerraVis system is expected to cost less than 5% of the overall cost of a pickup truck. Furthermore, TerraVis is in development now to give current pickup truck owners access to EV tech without investing in a new truck and to further leverage the power of their electric truck in the future. It is a future-proof product that truck owners will bring as they upgrade and expand with more modular storage.

Not a One-Trick Pony

The TerraVis™ system’s application is not just limited to extending the mileage of EV pickup trucks.

The battery system, Terravis “Cor” can also be touted as a mobile power plant. The system will take power from the cover and store it in modular battery packs — storing 1.5kWh of energy in up to four batteries. This can be stored and transported in the truck’s bed using the TerraVis™ mounting system.

The batteries can power almost anything with its built-in 2kWh power inverter from the job site or campsite which can be used in the event of a natural disaster or power outage.

The unique feature of the battery system is that it can be available for purchase as a standalone consumer product — even if you’re not a truck owner.

Worksport has been around for over a decade and has been successful with its lineup of five unique truck bed cover models. The company has an intellectual property portfolio of over 30 assets of utility patents and trademarks.

The company competes in many multibillion-dollar markets. The EV market is estimated to increase to $30 billion by 2030. This value may be much more than what is estimated with rumors about Apple Inc. (NASDAQ: AAPL) joining the bandwagon with its first generation of EVs. According to The Korea Times, Apple is close to signing an agreement with LG Magna e-Powertrain. If the agreement were to take place, we could expect a prototype to be teased in early 2024.

The specialty-equipment market has a market value of over $12 billion as pickups alone account for over 25% of the market. The other big markets include the tonneau cover market ($600 million), the battery storage system market ($2.9 billion in 2020).

With the cumulative size forecasted over $24 billion by 2025, Worksport stands a chance to generate revenue over 1.5 billion, assuming a 5% market share. The company’s market stretches beyond just the U.S., into Canada, Latin America, Australia and more.

Worksport currently has over $10 million in cash and cash equivalents and no long-term debt. In February 2021, the company closed its oversubscribed Reg-A offering, raising $4 million. To date, the company has received over $2.9 million from the exercise of warrants associated with its Reg-A offering and has also raised an additional $3 million from non-brokered Private Placement.

“TerraVis is the culmination of Worksport’s effort to look beyond our core business producing the highest quality tonneau covers for all truck owners,” said Steven Rossi, CEO and founder of Worksport. “We’re dedicated to pushing the boundaries of what a truck accessory can offer, and to do so, we are looking to the future of EV trucks to bring that technology one step closer to today’s truck owners. Our solar-powered tonneau cover will allow anyone to generate and store power for use in their daily life — work and sport.”

Worksport is a partner of Benzinga. The information in this article does not represent the investment advice of Benzinga or its writers.