Some on Wall Street think Virgin Galactic's stock (SPCE) needs to seriously come back down to Earth, and fast.

Shares of the space travel company skyrocketed nearly 40% on Friday after the Federal Aviation Administration (FAA) granted the company a license needed to begin flying passengers to space. Passenger flights are reportedly poised to commence in 2022.

The company concluded its last test flight on May 22, and is eyeing a flight that would carry Virgin Group founder and billionaire Richard Branson sometime this summer. Rival billionaire and Blue Origin founder Jeff Bezos is expected to head up into space on July 20 with his brother.

But Virgin shares gave back some of the gains on Monday (shares are still the top trending ticker on Yahoo Finance) as analysts continued to question the company's business prospects. Virgin Galactic traded down more than 1% Monday afternoon. 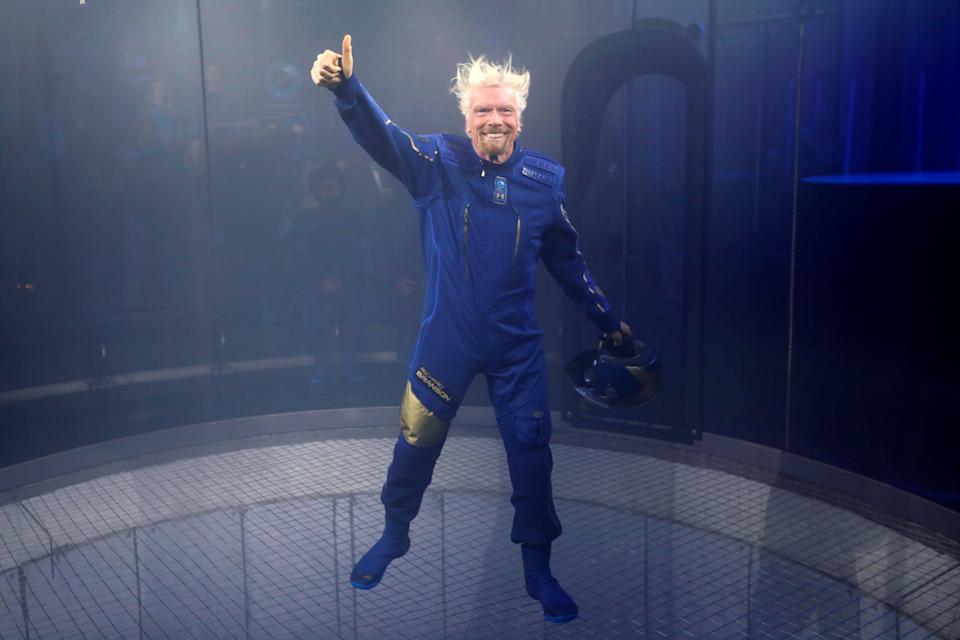 Sir Richard Branson appears in a sky diving simulator as he wears Virgin Galactic’s new space-wear system, developed in partnership with Under Armour, during an event to unveil the suits to be worn by future Virgin Galactic space travelers in Yonkers, New York, U.S., October 16, 2019. REUTERS/Mike Segar

"Based on the expected pace of the remaining three test flights, Virgin Galactic will likely not be positioned to carry paying customers until at least early 2022. More importantly, the reservation list has not expanded from 600 customers since 2018, and the company will remain too capacity constrained to serve this limited customer group or meet consensus expectations for revenues in 2025," wrote analysts at research firm Paragon Intel. "Virgin Galactic will need eight tested and fully operational ships by 2024, as well as 900 cumulative single-use motors, neither of which is supported by the company’s current supply chain. FAA approval following a successful test flight does not change the economic viability or long-term value of the business."

The researchers kept Virgin Galactic on their short idea list.

Adds Paragon Intel, "Virgin Galactic will burn through available cash within two years and require additional equity to fund development and production. Even under fantastical assumptions, Virgin Galactic's shares are overvalued. Under more reasonable assumptions, however, shares have limited to no value."

Out of the nine sell-side analysts that cover the stock, 55% rate it a Hold. The Street doesn't see Virgin turning a profit until 2024, when it's expected to churn out a modest $39.8 net profit from its space operations. Analysts see Virgin burning nearly $500 million in cash over the next three years, raising the prospects for a capital raise as suggested by Paragon Intel.