Why the Market is Surging

As I write Friday morning, the S&P is building on yesterday’s all-time high.

Plus, we’re on pace for the strongest week of gains since early April.

What’s behind this strength? And how long will it continue?

Today, we’re going to eavesdrop in on the podcast to hear what’s driving the gains and how long it will last.

But that’s not all…

After Louis’ thoughts, we’ll redirect to an internal email our CEO, Brian Hunt, sent some department heads earlier this week. In short, it’s a reason why it’s critical that investors have exposure to tech-based growth stocks this decade.

It’s not just about maximizing returns – it’s about not getting left behind financially. More on that in a bit.

First, let’s check in with Louis.

***The many tailwinds behind today’s surging market

For newer Digest readers, Louis is an investing legend.

MarketWatch called him “the advisor who recommended Google before anyone else.” And Forbes gave him the title “King of Quants.”

“Quant” simply means he uses numbers and algorithmic-rules to guide his investment decisions rather than hunches or gut-feels.

The approach has been incredibly effective, as Louis has amassed one of the most respected track records in the investment community.

There are many reasons, but let me hit the main ones for you.

First of all, this is a seasonally-strong time of year. Late June is a good time of year for our stocks, because we benefit from institutional “window dressing” where the professional managers want to make their stock portfolios pretty before the upcoming second-quarter announcement season.

Furthermore, the annual Russell realignment is underway. The final list will come out (today), and then you’ll see some more strength in a lot of small-cap stocks early next week because they’re being added to the indices.

Louis explains that many money managers are “tracking managers”. In short, this just means that their portfolios correlate to the various indexes they track. So, if an index adds or kicks-out a stock, these tracking managers reflect the move in their fund holdings.

Back to Louis with an additional tailwind behind today’s market:

The Fed is going to remain accommodative.

Jerome Powell is going to do whatever it takes to make sure that the economy is going to remain strong. And the timing of any rate increase is far off in the future.

***“The Fed has a lot of excuses to keep things accommodative”

At this point in his Flash Alert, Louis zeroes in on why we can expect a dovish Fed for many months to come. In short, it boils down to the economic data.

We have had a lot of interesting economic news this week.

So, the supply chain glitches are still out there.

On the housing front, existing and new home sales aren’t that strong anymore. Now, some of it is a lack of inventory, some of it is higher prices, but you can see that things are starting to slow down just a bit.

On the unemployment front, new claims on unemployment remain higher than economist were expecting, but continuing claims are dropping.

Of course, some people are falling off of unemployment because the pandemic was fifteen months ago. The other thing is a lot of states are getting rid of those supplemental employment benefits and that’s starting to have an impact.

Put all of this less-than-robust economic data together, and Louis tells us that the Fed has plenty of reasons to remain accommodative for many months. He says that we remain in a “Goldilocks” environment for stocks that features an accommodative Fed, ultra-low interest rates, and unbelievable earnings growth.

***What to expect going forward

Next, Louis provides a roadmap for navigating the remainder of the summer:

We’re going to rally going into the 4th of July holiday cause it’s a happy time of year for everybody… Then the market might have to pause, just a tad.

And then we just regroup for earnings. And earnings are working. Growth has reasserted itself in the last six weeks…

So, we’re going to go a lot higher because we have a lot of good earnings coming out. And then it will get bumpy in August.

Let’s enjoy this rising market and the new highs while we can. If things get choppy in August as Louis suggests, we’ll be here to help you navigate it.

***Switching gears, let’s look at an email sent from our CEO, Brian Hunt, earlier this week

Louis himself recommends many of these stocks, since his market approach focuses on earnings strength, and elite tech stocks tend to generate huge earnings – the kind that can compound your wealth at far higher rates than traditional “old school” stocks.

With that in mind, I want to share with you an email that our CEO, Brian Hunt, sent to various department heads earlier this week.

In the email, Brian references an economist named Lacy Hunt (no relation to Brian). Lacy recently pointed out how, from 1870 to 1997, real per capita GDP advanced 2.2% per annum. However, the growth since then has only been 1.2% per annum.

Most people don’t know how U.S. GDP growth is WAY down from its historical trend. Compared to our history, the economy is kind of in stall speed.

That’s because we’ve loaded the economy with debt and that debt is acting as a drag.

The country’s economic car is carrying too much dead weight.

This makes it more and more important to focus your investment dollars on industries that are generating awesome growth. They are the only places that will allow you to achieve “financial escape velocity”… to get your portfolio doing well despite the coming tax increases, despite any currency debasement, and despite the U.S. economy growing at a rate that is way below its long-term trend…

Tech and innovation is the only area that is generating a lot of wealth and growth.

I want to show you what this looks like.

Below are charts that Brian provided in his email. Look at the staggering outperformance of tech. And as you do, ask yourself…

Tech vs. traditional banking, past 15 years 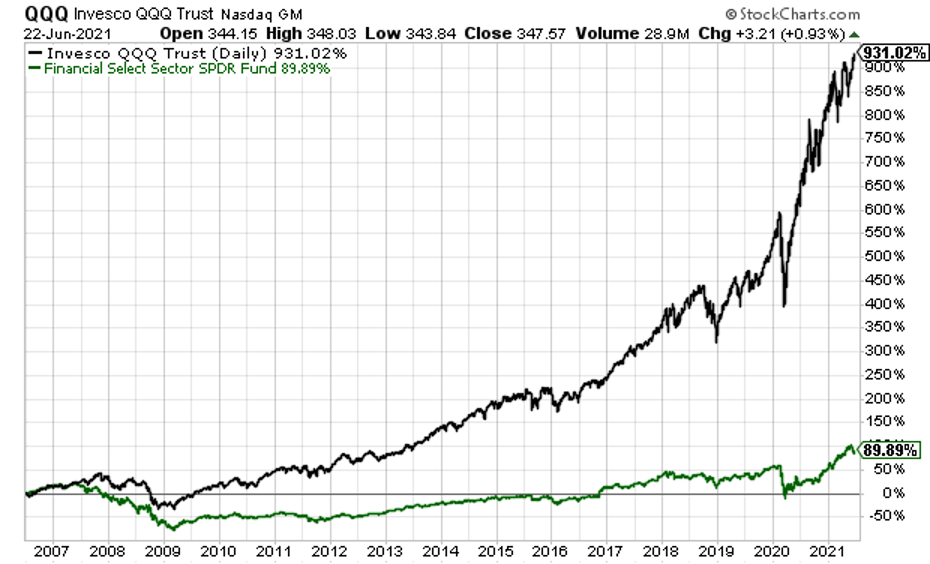 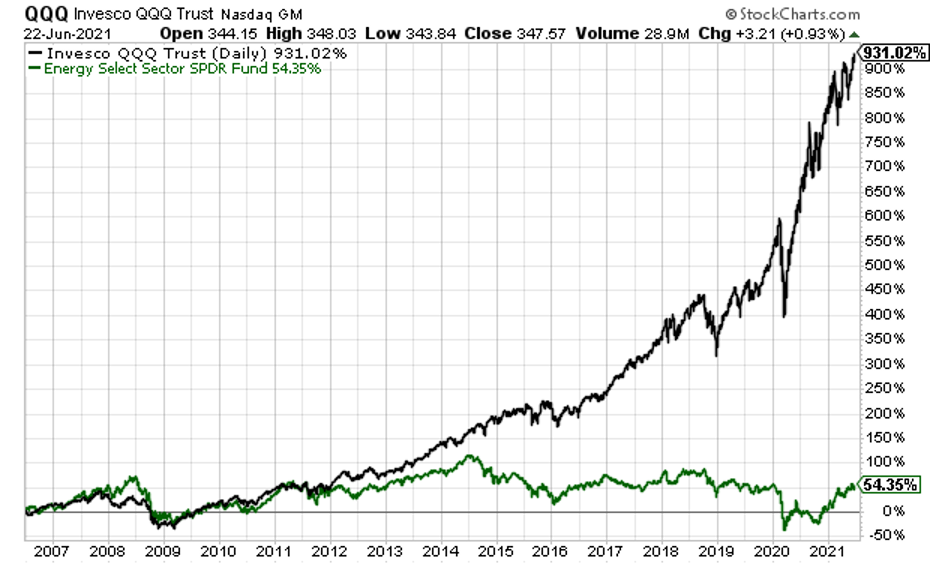 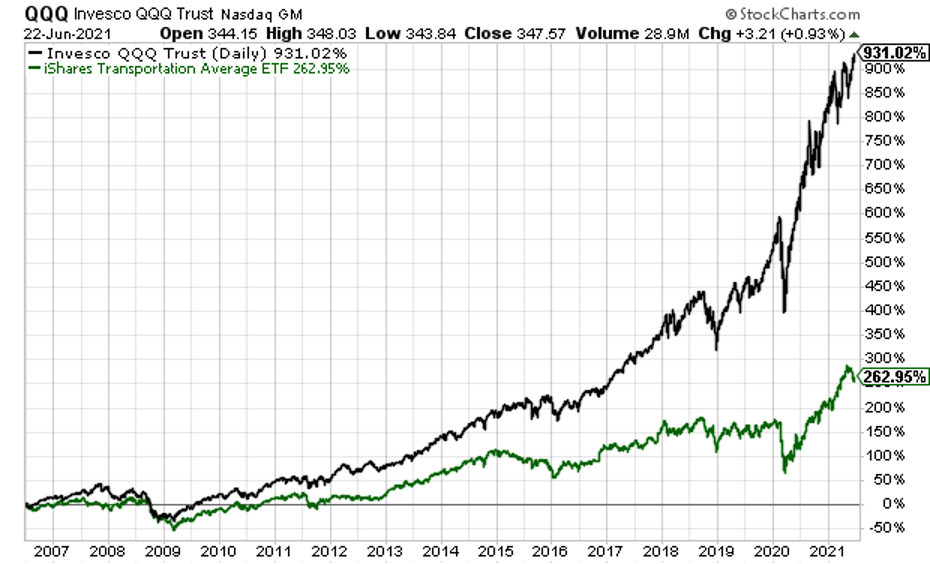 Tech vs. Gold Mining, past 15 years 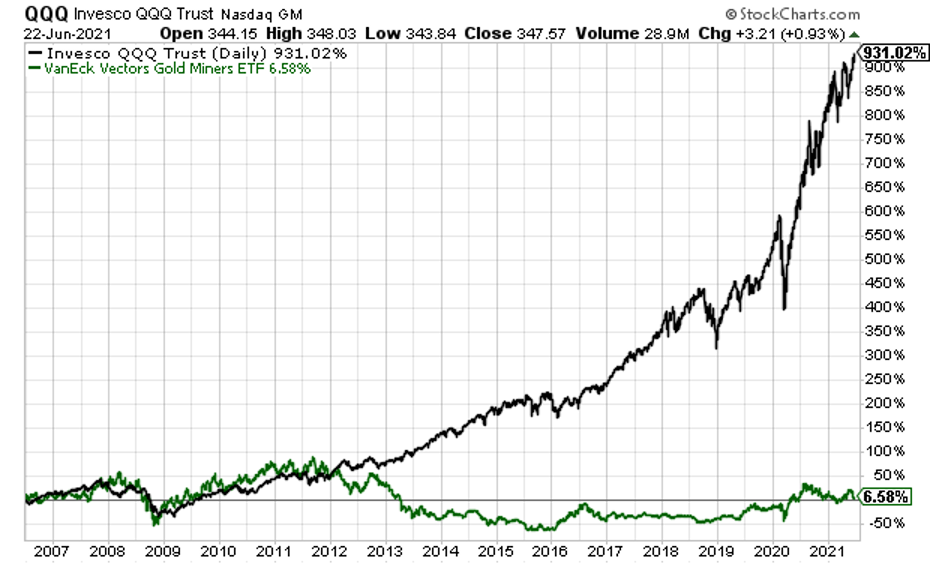 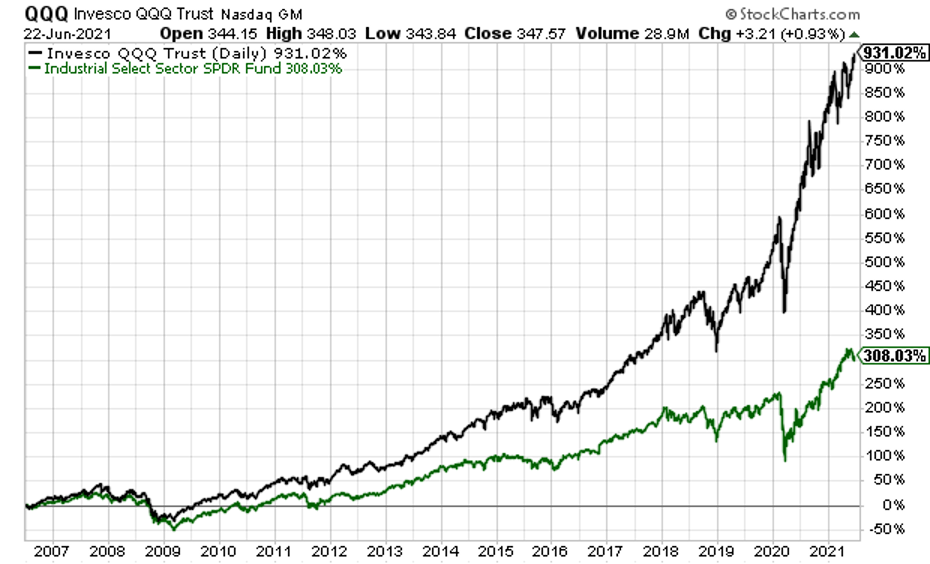 Tech vs. insurance, past 15 years 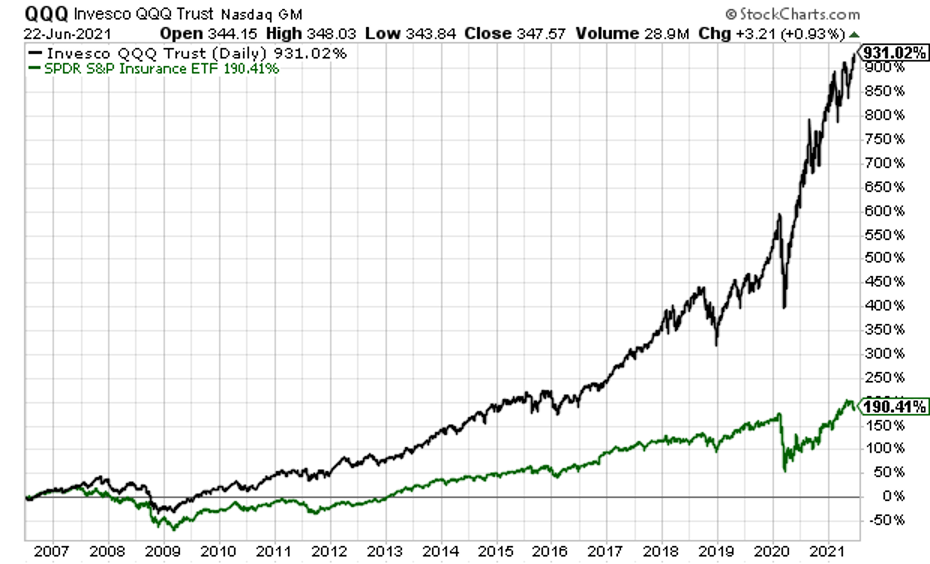 Tech vs. Warren Buffett, past 15 years 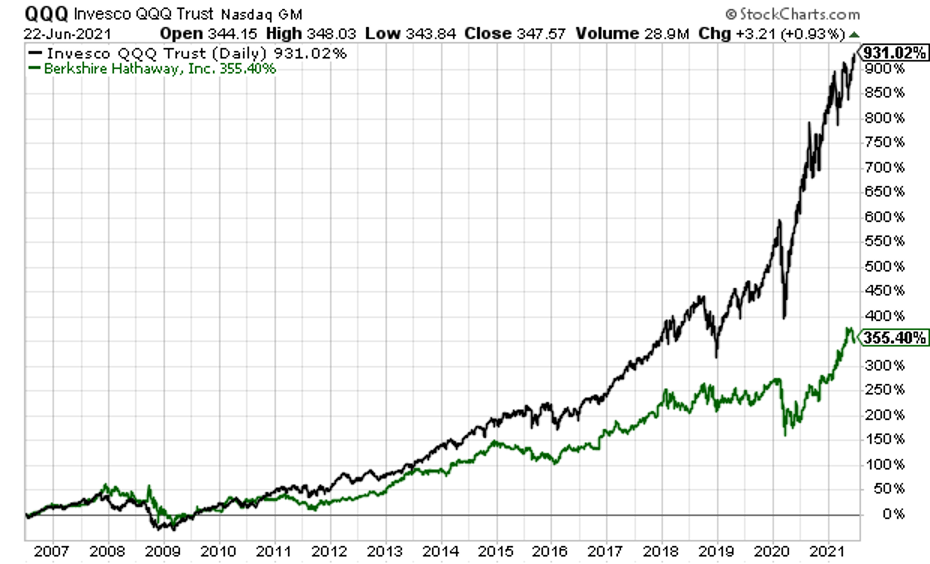 Our InvestorPlace analysts like Louis, Luke Lango, Eric Fry, and Charlie Shrem are committed to helping you compound your wealth in the years ahead – which will mean a great deal of investing in technology. Keep in mind, this is a wide universe, from mind-blowing consumer goods, to blockchain innovations, to biotech breakthroughs, and everything in between.

But it’s important that you recognize the need for this type of stock in your portfolio.

On that note, I’ll give Brian the last word:

Some might say that allocating a huge portion of your portfolio towards tech and innovation is too risky.

I say the alternative is far riskier.

Tech and innovation is the only area that is generating a lot of wealth and growth. So much of the rest of the country and economy is just barely doing better than treading water… while the government debases the currency. So many people are losing wealth and don’t realize it. So many people are like frogs in a boiling pot of water.

Things appear to be great. But for a lot of folks, they are not. And the trend will only grow in power…

The post Why the Market is Surging appeared first on InvestorPlace.