A remarkable oil rally has seen oil prices climb almost 34 percent so far this year. Bullish sentiment is now driving speculation of $100 oil in 2021 as collective confidence of a rebound in global economic activity gains momentum. However, there are plenty of bearish factors that remain in oil markets that analysts would do well not to overlook.

Chinese refiners have already started to tap into their reserves, threatening to hurt demand from the world’s largest oil importer. Geopolitically, the possibility of sanctions on Iran’s oil industry being lifted could lead to a new flood of supply while tensions between China and the U.S. could reignite a trade war between the two. Finally, as oil prices rise we may see U.S. shale production inch up, adding to global supply. While there is plenty to be bullish about in oil markets, calls for $100 oil are premature, to say the least.

It is interesting to note that there seems to be a trend in oil markets at the moment where slightly positive news will see a major reaction while bearish news will be all but ignored. In such an environment, a sudden shift in sentiment could drive a major change in oil prices. While it is unclear where such a shift in sentiment will come from, it is more than likely to come before oil prices hit $100.

One key bearish factor to look at is the potential for a reduction in oil imports from China. Consider the fact that Chinese refiners took 589,000 bpd out of their refineries in May according to Clyde Russell. China amassed a huge amount of oil when prices hit a 20 year low and as prices continue to rise, China will be increasingly incentivized to tap its reserves rather than import expensive oil. While this is unlikely to change the underlying fundamentals of oil markets, the reduction in Chinese imports is certainly one of the factors that could finally drive a shift in oil market sentiment. 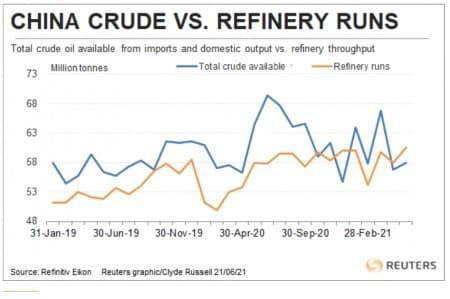 An interesting factor to consider on a geopolitical front is the return of Iranian crude if U.S. sanctions on the country’s oil industry are lifted. Not only is there a potential for Iran to return to its pre-sanction production levels of 2.8 mbp, but it could also bring more oil to the market by using its inventories of 60 million barrels. Such a development would certainly show up in the numbers and could once again impact the mood of investors.

Another geopolitical factor to keep an eye on is U.S.-China relations. The U.S. is trying to block the purchase of Magnachip by Chinese equity funds. An escalation, at any point, between the U.S. and China on the trade war front would spell trouble for oil markets and hurt the current bullishness in markets. It is these geopolitical changes that historically have had the biggest role in shifting the tone of media coverage and, by extension, the dominant sentiment in oil markets.

An increase in oil price is always great news for U.S. shale producers as more production can be supported when prices are higher. Up until now, these producers have been adhering to a self-imposed discipline and not adding more rigs. To give you a sense of just how disciplined these producers have been, the last time prices were at current levels the total number of rigs operating was 1000, today there are only 470. While production and rig count aren’t directly associated (as advancement in technology can lead rigs to produce more oil) if prices continue to increase we will likely see more rigs and more production. According to Primary Vision’s Frac Spread Count, we currently stand at 233 spreads as of 25th June 2021, which as can be seen in the chart below, is very high as compared to last year. 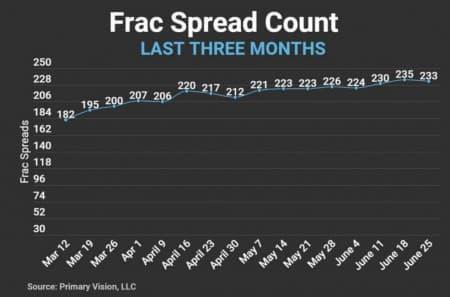 Furthermore, as mentioned by Rystad’s head of analytics, “there is plenty of spare capacity” that can be used to pump up production if required. He also pointed out that oil demand is still 5 million barrels below ‘normal’ levels. To add to that, the spread of the Delta Covid variant and new restrictions in Europe (Germany, Spain, and Portugal) could spell fresh trouble for the global economy. As of 29th June 29, 2021, the UK has reported 22,868 more cases, the highest since 30th January 2021.

Finally, OPEC+ is expected to raise output slower than expected and was forced to delay its output decision due to a failure to agree over a sudden increase in production. This further highlights the fact that concerns regarding a return in demand remain (especially after the spread of Delta variant) and OPEC+ uncertainty has already put downward pressure on oil prices.

Oil prices haven’t hit $100 since 2014, and the current oil market does not justify such a price. It would require a major geopolitical event such as a missile strike on a refinery to bolster the case for $100. Every time oil prices increase there is added incentive for China to slow down its consumption and for shale to ramp up its production. All of that is before considering the multiple bearish factors hanging over markets.

By Osama Rizvi for Oilprice.com