Why Is Penny Stock Galmed Pharma A “Strong Buy” With Triple-Digit Upside?

Galmed Pharmaceuticals (GLMD) is a clinical-stage biopharmaceutical company focused on developing Aramchol, a stearoyl-coenzyme A desaturase‑1 (SCD1) modulator that targets the liver. Aramchol is a novel oral therapy for the treatment of Non-alcoholic Steatohepatitis (NASH), a type of fatty liver disease and fibrosis.

The company, in collaboration with the Hebrew University, is also developing Amilo-5MER, a 5 amino acid synthetic peptide. Synthetic peptides, when bound to a carrier protein, can be used as antigens to generate custom antibodies as they stimulate an immune response in the body.

In February this year, GLMD raised around $18.4 million in a public offering of its shares from its at-the-market equity facility. The company had cash and cash equivalents of $58.9 million on its balance sheet as of March 31, 2021, compared to $50.9 million on December 31, 2020.

Following the earnings, H.C. Wainwright analyst Ed Arce reiterated a Buy and a price target of $25 (812.4% upside potential) on the stock.

Let’s have a look at why Arce is so bullish on the stock as we explore Galmed Pharma’s current drug pipeline.

Galmed stated in the company’s Q1 earnings release that the histology (microscopic study of tissues and cells) results from around 33.3% of the study population will likely be available in the fourth quarter of this year. This 33.3% of the study population accounts for around 50 subjects who had higher exposure to Aramchol and are part of the open-label section of the ARMOR Phase 3 study.

The ARMOR study evaluates the efficacy of Aramchol in subjects with NASH and fibrosis who are in later stages of the disease and who are overweight or obese and have prediabetes or type 2 diabetes. The study consists of two parts. The first part of the study is an open-label study where Aramchol is administered twice daily in a dosage of 300mg and “explore the kinetics of histological outcome measures as well as several non-invasive tests (including ProC3, ELF and Fibroscan) associated with NASH and fibrosis for the treatment duration of 24, 48 and 72 weeks.”

The second part of the study “is a randomized, double-blind, placebo-controlled study with a histology-based surrogate endpoint that is intended to serve as the basis for the submission of a marketing authorization application under regulatory provisions of accelerated/conditional approval.”

Galmed’s CEO, Allen Baharaff said, “With the increasing globalization of drug development, it has become essential that data from multi-regional clinical trials (MRCTs) is accepted by regulatory authorities across regions and countries as the primary source of evidence, to support and facilitate efficient marketing approval of drugs.”

“In line with these considerations, the ARMOR study was designed as an MRCT in approximately 215 centers located in U.S., Europe, Latin America, Australia, and now China. Being granted the trial approval by the NMPA is of great significance as it brings us a step closer to offering an optimized new oral therapy to patients with NASH and fibrosis who now have very limited treatment options,” Baharaff added.

Arce commented on Aramchol’s Phase 3 ARMOR study in a research note to investors saying, “This open label readout provides a key preview of Aramchol’s safety and efficacy with 72 weeks of treatment, or the longest treatment duration to date… Galmed reported that new clinical sites are planned in countries including South Korea and Mexico; we also expect ARMOR's expansion into China soon given its IND application approval that was announced on May 3, 2021… We expect Galmed to receive formal guidance from the FDA in 3Q21 prior to Aramchol meglumine’s advancement into the registrational portion of ARMOR that remains on target to initiate by the end of 1Q22.”

The company stated in its Q1 earnings release that it has completed dosing in a Phase 1 pharmacokinetic (PK) study with healthy volunteers who received Amilo-5MER in varying doses from 10mg to 180mg. After assessing the safety and proportional PK response, the company has moved to a single dose of 360mg of Amilo-5 Mer.

The company expects topline data from this study in the second half of this year and a Phase 1B proof of concept study is planned for the fourth quarter of this year. (See Galmed Pharmaceuticals stock analysis on TipRanks)

Arce said about the Amilo-5MER Phase 1B proof of concept study, “This study is expected to evaluate Amilo-5MER's effects on biomarkers over four weeks, with a four-week safety follow-up period. Galmed management also announced that it plans to develop additional formulations of Amilo-5MER for other inflammatory diseases, including an injectable formulation for rheumatoid arthritis (RA), and for COVID-19 symptoms if funding is available through the NIH [National Institute of Health] or BARDA [Biomedical Advanced Research and Development Authority].”

“At this time, we do not include any value for the Amilo-5MER program. Risks to the attainment of our PT include clinical trial failures, unforeseen safety and/ or tolerability issues, inability to sufficiently fund ongoing R&D via the equity markets, failure to secure a feasible registrational pathway, and the dilution to current shareholders from additional equity offering(s),” Arce added.

Shares of GLMD have risen 5.8% in the past month.

Analysts are bullish on the stock and the with a Strong Buy consensus rating based on 4 Buys. The average analyst price target of $16.50 implies approximately 502% upside potential to current levels. 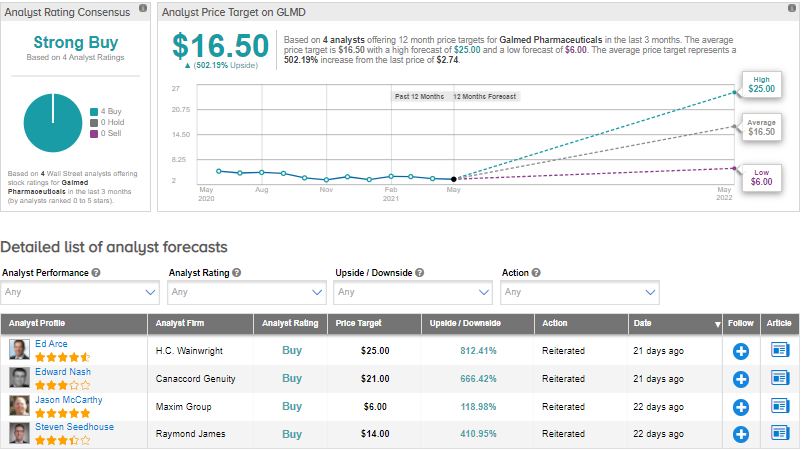