Why everything is costing you more money

If everything seems like it's costing you more money right now that's probably because it is — the saving grace being that perhaps things get a bit cheaper in the fall.

But it's important to understand as an investor— and consumer —why inflation has picked up. Indeed it has major implications on everything from monthly budgeting of one's finances to investment portfolio construction.

Goldman Sachs Chief Economist Jan Hatzius attempts to demystify this rise in prices on items such as Chipotle burritos and Whirlpool appliances in a new note released on Monday.

"First, during the pandemic demand for several consumer goods has surged far above normal levels, and production struggled to keep up. Second, the global shortage of microchips has limited the production of many consumer goods such as appliances and new cars and has also spilled over to shortages of used cars and rental cars. Third, labor shortages have led to large increases in low-end wages that appear to be flowing through to rising prices in categories that rely heavily on low-wage labor, such as food services," Hatzius explains.

The gains in prices at the hands of these macroeconomic factors outlined by Hatzius have been eye-popping to say the very least.

The Consumer Price Index (CPI) notched a faster than expected rise in May, according to the latest from the Bureau of Labor Statistics (BLS). Headline consumer prices surged by 5% from a year ago. The CPI rose 4.2% in April.

The headline gain marked the fastest pace of increase since 2008, the BLS noted.

Excluding volatile food and energy prices, the core consumer price index increased 3.8% in May. That's quicker than the 3% increase in April. 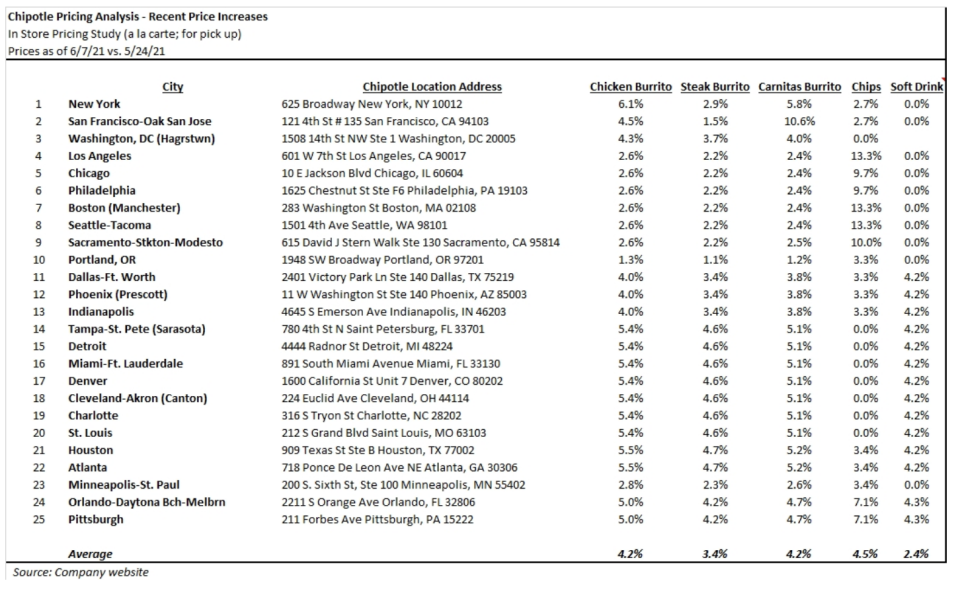 As for the aforementioned Chipotle, Raymond James analyst Brian Vaccaro wrote Monday prices for tortilla chips at the restaurant chain in some locations has increased north of 13% inside of two-weeks (see chart above). Again, that mostly reflects the cost of doing business going up for Chipotle (in particular labor costs).

Hatzius is among most economists on Wall Street who believe inflation is nearing a peak, suggesting less of a dent to consumer wallets and greater spending power in the months ahead.

"We expect all three of these drivers to diminish over the next few quarters, causing recent price spikes in many categories to stabilize or reverse. Elevated demand for durable goods should normalize as fiscal support for household incomes diminishes and spending shifts to services," Hatzius says. "Microchip production is on track to rebound sharply over the next two quarters, though it may not fully recover until next year. Finally, many low-wage workers should become available over the next few months as virus problems fade and extra unemployment benefits expire, dampening low-end wage pressures. The main exception is commodities prices, which our analysts expect to rise further, putting modest further upward pressure on some consumer prices."

The economist adds, "While many of these price spikes have been extreme, they appear to be one-off, temporary increases in price levels due to pandemic dislocations that, on net, are likely peaking right now or will peak in coming months."

Investors have bought into this view of inflation being transitory, sending world stocks to fresh records and the 10-year yield to three-month lows.

As for how to capitalize on this backdrop of peaking inflation from an investment standpoint, J.P. Morgan strategist Mislav Matejka recommends staying invested in pro-cyclical stocks.

"We stay long financials and consumer plays, and would use the stalling in traditional cyclicals over the last two to four months — capital goods, semis, and other — to rebuild exposure," Matejka writes.

Upgrade now to stay ahead of the market with Yahoo Finance Plus.