Most of Wall Street underestimates the impact of cord cutting and overestimates the extent companies can compensate with internet streaming channels. As a result, most of the Street was shocked by AT&T’s (NYSE:T) decision to unload WarnerMedia for a relatively low amount of money, triggering a sizeable downturn in T stock. I believe that Disney (NYSE:DIS) stock will, at some point, take a similar, but much worse, tumble. 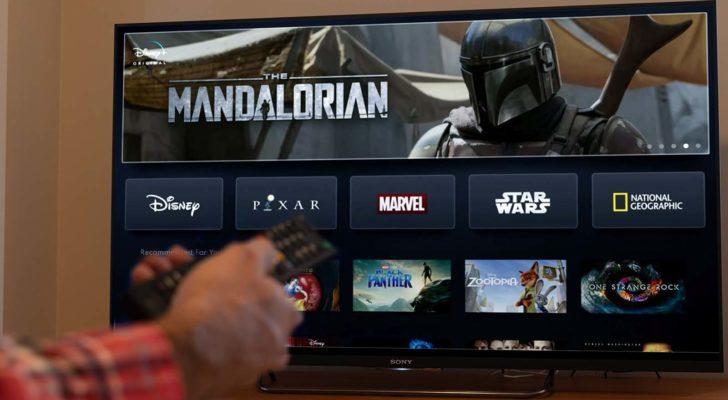 Image of a person watching Disney+

But unlike AT&T, Disney does not have a huge business that is immune to cord cutting. Consequently, I believe that DIS stock will ultimately drop by a much higher percentage than AT&T’s shares did. And, I recommend that investors sell the shares.

In 2018, AT&T closed its deal to acquire Time Warner for $85 billion. Last month, the conglomerate announced that it was unloading Time Warner’s assets (which it had earlier renamed WarnerMedia) for “$43 billion in a combination of cash, debt and WarnerMedia’s retention of certain debt.”

The owners of T stock will receive a 71% stake in a new company that will consist of WarnerMedia and Discovery (NASDAQ:DISCA). But, factoring in the value of considerations AT&T will receive directly, the conglomerate will obtain nearly 50% less than it paid for the media assets.

I think that AT&T was willing to take that haircut largely because it realized cord cutting would greatly undermine WarnerMedia’s value. And it realized streaming would not come close to matching the dozens of dollars from millions of cable subscribers every month. Indeed, in 2020, WarnerMedia’s revenue fell nearly 10% to $30.44 billion.

Unfortunately for the owners of DIS stock, Disney is much more dependent on cable revenue. In 2019, Disney’s Media Networks generated $1.78 billion, versus $3.436 billion of operating income for the company as a whole.

The Studio Entertainment unit, which is also negatively affected by the huge popularity of Netflix (NASDAQ:NFLX) and other streaming services, accounted for another $1.08 billion of Disney’s operating income. Conversely, in Q4 of 2019, AT&T’s Mobility unit generated $5.5 billion of operating income, versus the company’s total operating income of $5.3 billion.

To sum up, AT&T unloaded WarnerMedia for a much lower price than it paid for it largely because it’s afraid that its performance will be decimated by cord cutting. In the wake of the transaction, AT&T’s stock fell meaningfully.

DIS stock will likely, once Disney’s day of reckoning comes, take a much bigger hit.

Of course, citing Disney+’s huge subscriber base and brand power. Disney bulls always assume that the channel will rescue the company.

But, as I’ve stated several times in the past, Disney+ is actually a loss leader for the Mickey Mouse empire. And despite Disney+’s subscriber gains and heavyweight brand, Disney+ isn’t likely to provide meaningful fuel to the company’s bottom line anytime soon.

Last quarter, the operating loss of the company’s direct-to-consumer unit, which includes Disney+, came in at $290 million. That was much better than the $805 million that the unit lost during the same period a year earlier. Still, the division remains far away from generating profits that will move the needle for DIS stock.

And YoY comparisons last quarter may have been fairly easy for the unit because of the onset of the pandemic. Consequently, the direct-to-consumer division’s operating income may not continue to jump by such large amounts.

The Bottom Line on DIS Stock

AT&T’s sale of WarnerMedia for a relatively low price strongly suggests that my theories about the strong impact of cord cutting and weak profitability of streaming channels are on target.

Indeed, the AT&T deal, along with the gains of DIS stock over the last year, made me much more bearish on DIS stock than I was in mid-2020.

On the date of publication, Larry Ramer did not have (either directly or indirectly) any positions in the securities mentioned in this article.

Larry has conducted research and written articles on U.S. stocks for 14 years. He has been employed by The Fly and Israel’s largest business newspaper, Globes. Among his highly successful contrarian picks have been solar stocks, Roku, Plug Power and Snap. You can reach him on StockTwits at @larryramer. Larry began writing columns for InvestorPlace in 2015.