The shares of Wells Fargo &Co (NYSE:WFC) have enjoyed a solid run higher in 2021, adding over 50% since the beginning of the year. The security has yet to overtake its pre-pandemic levels, though, and the bank stock has been middling since May, when it ran into pressure at the $48 mark. Today, the equity is off 1.1% at $45.41, though there's reason to believe the financial name could soon break out of its holding pattern.

Specifically, WFC just came within one standard deviation of its 40-day moving average, after a lengthy stretch above the trendline. There have been four similar signals occurring in the past three years, according to data from Schaeffer's Senior Quantitative Analyst Rocky White. WFC was higher one month after three of these pullbacks, averaging a 7.3% pop. A similar move would put the security back above aforementioned pressure at the $48 mark, for the first time since February 2020. 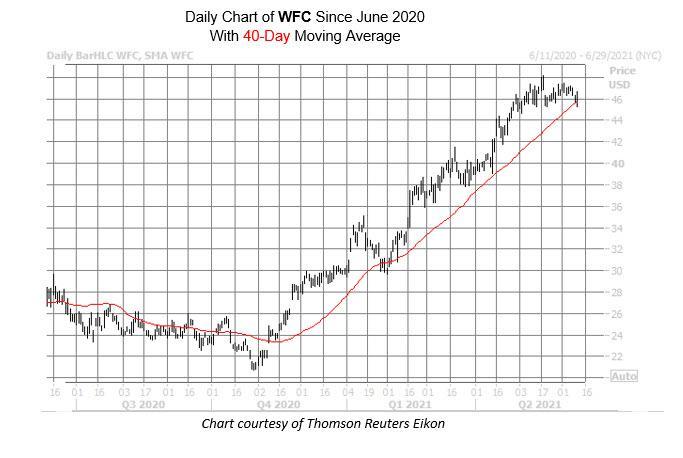 An unwinding of pessimism in the options pits could push WFC higher. At the moment, the equity's Schaeffer's put/call open interest ratio (SOIR) of 0.91 stands higher than all other readings from the past year. This suggests short-term options traders have rarely been more put-biased. Plus, at the International Securities Exchange (ISE), Cboe Options Exchange (CBOE), and NASDAQ OMX PHLX (PHLX), WFC sports a 50-day put/call volume ratio that stands in the 96th percentile of its annual range.

A change of tune among the brokerage bunch could also give Wells Fargo stock some upward momentum. While nine analysts covering WFC consider it a "buy" or better, seven still say "hold."