Wedbush: What’s on the Menu for Apple’s Worldwide Developers Conference

The new week kicks into action with Apple’s (AAPL) annual WWDC (worldwide developers conference). For anyone fascinated by feuds amongst the mega-caps, there could plenty to savoir at this year's virtual event. As par for the course, Apple is expected to announce iOS upgrades and software improvements for the coming year, but Wedbush’s Daniel Ives also believes the introduction of iOS 15 could create some additional friction in an escalating dispute with a rival tech giant.

“We expect data privacy and security to be a main focus and theme of Cook's keynote as Apple solidifies its privacy policy with the iOS 15 unveil,” the 5-star analyst said. “This follows the iOS 14.5 release which has doubled down on privacy features for the consumer at a time which Apple has directly put itself on a collision course with Facebook around the ability for users to block data tracking.”

That possible conflict aside, various notifications/lock screen changes are also anticipated as part of the update which could also include a “revamped iMessage feature set.”

Ives also expects non-software related announcements. Namely, the analyst thinks a surprise is in store on the hardware front; Ives anticipates an announcement of a new MacBook Pro release, with a 14-inch and 16-inch display “driven by the M1 chip.”

The analyst also thinks there will be “hints around upcoming initiatives with some breadcrumbs dropped as developers crave bigger AR functionality in the works for the coming years.”

Looking ahead, Ives projects that by next summer (2022), the “long-awaited” Apple Glasses will be unveiled. And as if ratcheting up the volume in the Facebook squabble is not enough, Tesla is in Apple’s sights too. By 2024, Ives believes the Apple Car will could see the light of day and assumes “more news/partnerships this summer on this front.”

So, down to business, what does this all mean for AAPL investors? Ives reiterated an Outperform (i.e., Buy) rating on the shares backed by a $185 price target. Investors could be sitting on gains of 47%, should the forecast play out as expected. (To watch Ives’ track record, click here)

Not all on the Street are convinced it is time to load up on Apple stock although the majority remains in the Cupertino giant’s corner. Based on 19 Buys vs. 5 Holds and 2 Sells, the stock has a Moderate Buy consensus rating. The average price target currently stands at $157.58, suggesting the upcoming year will yield returns of 25%. (See Apple stock analysis on TipRanks) 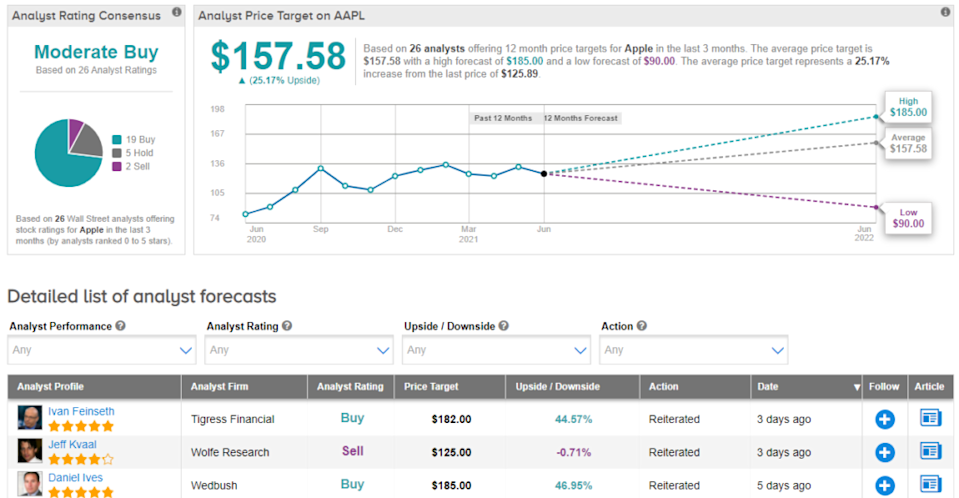