He’s built up his crypto ecosystem company Galaxy Digital (BRPHF) into something akin to a crypto Berkshire Hathaway (if there were such an equivalent in crypto) through investments in promising blockchain projects and his recent record setting $1.2 billion acquisition of custody giant BitGo.

And similar to the way equity investors turn to Berkshire’s Warren Buffett, Novogratz has established himself as one voice crypto investors often look to for the next great call. “Well, I am the oldest guy in crypto,” he joked in an exclusive interview with Yahoo Finance at the sold out Bitcoin 2021 conference in Miami over the weekend.

In explaining the 30% sell-off that hit bitcoin in May to officially rank as the worst month for bitcoin in a decade, Novogratz first dialed in on what he says drove the big run up to kick off the year: institutional buyers. 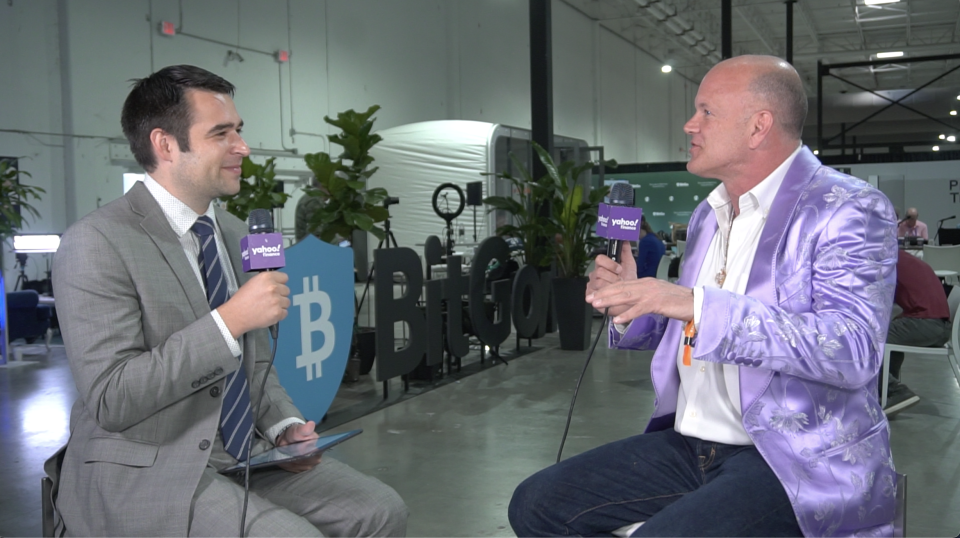 “Institutional money is wildly important. Let me give you some numbers — total crypto market cap, that's Bitcoin and everything else is about a trillion and a half dollars,” he said. “That's 30 basis points of total global wealth — 30 basis points — nothing. For that to shift to 2%, 3%, which I'm fundamentally of the belief that it will, you need institutions. They own all the money.”

As Novogratz contends, a lot of institutional players and hedge funds piled in around the $9,000 level back when hedge fund manager Paul Tudor Jones first laid out his investing thesis and advocated bitcoin’s "digital gold" use case in May 2020.

“A year later it’s at $60,000 and the urge to ring the cash register is such a deep-seated human urge that that’s what happened,” he said. “And so we see these kind of step function moves, and then we'll see a long period of consolidation … and you're waiting for the new narrative to arrive that brings the next wave of money and I think we're in one of those periods right now.”

One catalyst that Novogratz lists as a potential narrative shift is the Securities and Exchange Commission (SEC) finally approving a bitcoin ETF. There are currently more than 10 applications pending approval, one of which is from Galaxy Digital itself. Novogratz previously told Yahoo Finance he was thrilled that Gary Gensler was appointed SEC Chairman and predicted he would approve a bitcoin ETF by the end of the year.

“The big wealth in America is 50- to 80-year-olds, they typically work through RIAs, registered investment advisors. They're slower to buy in — that trend has started — the ETF just makes it easier,” he said. “And so yes, if we had an ETF tomorrow, the price would go higher.”

Elsewhere, the explosion of options to earn yield on crypto assets like bitcoin, either through centralized digital asset platforms like BlockFi (which Galaxy is invested in) or decentralized finance applications, is also drawing in capital that’s caught unused in a low interest rate environment. BlockFi advertises 4.5% APY on bitcoin, while other decentralized applications like THORChain offer yield over 15%. As entities that loan out assets they take in, they could become SEC targets, Novogratz predicted, but he also shared a belief that Gensler's understanding of crypto would lead him to act appropriately.

"I don't think all regulation is terrible, I think we need good regulation. Gary Gensler is a smart guy. I trust that he's going to come out with smart regulation," Novogratz said, adding that it could help attract more capital into the DeFi (decentralized finance) space. "I actually think one of the big surprises of the next five years is just how fast DeFi takes off."

Of course, that could bode less well for traditional banks and lending institutions. As JPMorgan CEO Jamie Dimon lamented in his shareholder letter earlier this year, non-bank competitors have been able to operate more nimbly without added regulatory hoops to jump through. If more of that is allowed to continue, DeFi's explosion is unlikely to subside. Total value locked in all DeFi protocols like THORChain have risen nearly 100-times from $16.5 billion in December to almost $160 billion at the peak in May, according to numbers from DefiLlama.

“[Banks] are going to lobby like crazy — less against bitcoin, more against DeFi — but bitcoin is the trojan horse to get everything in [to digital assets] and so revolutions don’t happen without a little bloodshed," Novogratz said. "Someone is losing when someone is winning.”

Zack Guzman is an anchor for Yahoo Finance Live as well as a senior writer covering entrepreneurship, crypto, cannabis, startups, and breaking news at Yahoo Finance. Follow him on Twitter @zGuz.