The Dollar/Yen is edging higher while hovering just above a nearly five-month low early Wednesday. The catalyst providing the support is the stronger-than-expected U.S. manufacturing report that helped raise hopes for a faster normalization of Federal Reserve policy.

On Tuesday, the Institute for Supply Management (ISM) said its index of U.S. manufacturing activity rose in May as pent-up demand amid a reopening economy boosted orders.

The Dollar/Yen initially weakened after the release of the report, in which ISM said manufacturing’s growth potential continued to be hampered by worker absenteeism and temporary shutdowns because of shortages of parts and labor. 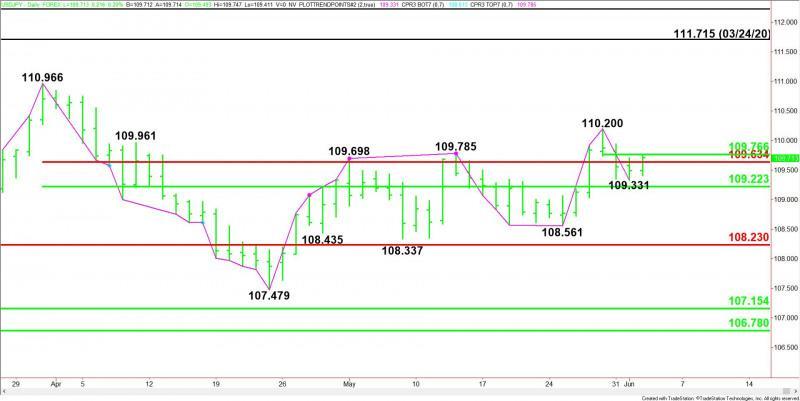 The main trend is up according to the daily swing chart. A trade through 110.200 will signal a resumption of the uptrend. A move through 108.561 will change the main trend to up.

The minor trend is also up. A trade through 109.331 will change the minor trend to down. This will also shift momentum to the downside.

The early price action suggests the direction of the USD/JPY will be determined by trader reaction to 109.766 to 109.634.

A sustained move over 109.766 will indicate the presence of buyers. This move could trigger the upside momentum needed to challenge the main top at 110.200.

A sustained move under 109.634 will signal the presence of sellers. If this move creates enough downside momentum then look for the selling to possibly extend into the minor bottom at 109.331 and the short-term 50% level at 109.223. The latter is a potential trigger point for an acceleration to the downside.