The USD/CAD tumbled on Friday, dropping more than a big-figure following the U.S. employment report. While the headline NFP figures were stronger than expected, the unemployment rate rose, and average hourly earnings exceeded expectations. U.S. yields dropped with the 10-year falling 3-basis points and the 2-year falling 2-basis points. This move put downward pressure on the greenback paving the was for a lower exchange rate. The U.S. unemployment rate rose more than expected, climbing to 5.9% from 5.6%. This rise came as nonfarm payrolls increased 850,000 for the month, compared with expectations of 706,000.

The USD/CAD dropped sharply on Friday, falling more than a 1-big figure. The exchange rate dropped through support which is now short-term resistance seen near the 10-day moving average at 1.2346. Support is now seen near the 50-day moving average at 1.2197. Short-term momentum has turned negative as the fast stochastic generated a crossover sell signal. The fast stochastic moved quickly from above 83, to 53 which reflects accelerating negative momentum. Medium-term positive momentum is decelerating as the MACD (moving average convergence divergence) histogram is printing in positive territory with a declining trajectory which points to consolidation. 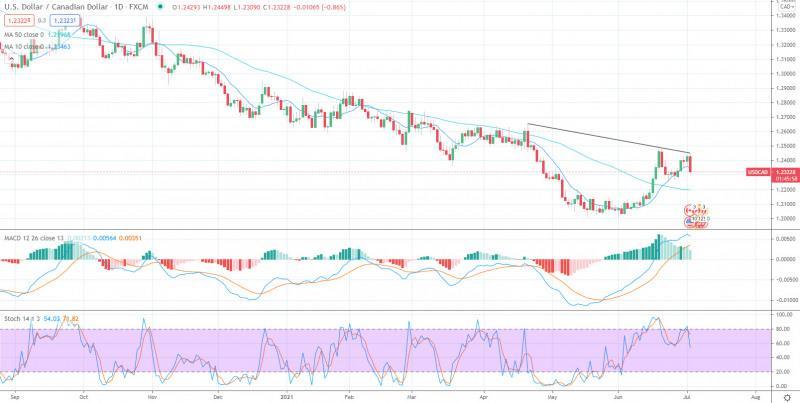 Canadian factory activity grew at the slowest pace in four months in June as material shortages persisted and inflation pressures rose. The IHS Markit Canada Manufacturing Purchasing Managers’ index (PMI) dipped to 56.5 in June from 57.0 in May. It was the lowest reading since February. The measure of pre-production inventories rose to the highest in data going back to October 2010 at 54.4 from 52.3 in May.