The USD/CAD eased on Friday but finished the week up 1.3%. Strong dollar gains came in the wake of higher than expected inflation figures. On Friday, the U.S. Commerce Department report stronger than expected U.S. retail sales which will feed into GDP growth. The dollar was broadly mixed against most major currencies. U.S. yields were slightly higher but remain under pressure following Fed Chair Powells testimony this week which shows that Fed is steadfast about keeping rates unchanged, despite rising inflation expectations.

The USD/CAD consolidated on Friday after hitting a 3-month high Thursday. The currency pair is poised to test resistance near the April highs at 1.2658. Support is seen near the 20-day moving average at 1.2418. Short-term momentum is positive as the fast stochastic generated a crossover buy signal. The exchange rate is overbought. The current reading on the fast stochastic is 91, above the overbought trigger level of 80 which foreshadows a correction. Medium-term momentum is positive as the MACD (moving average convergence divergence) histogram prints in positive territory with an upward sloping trajectory which points to a higher exchange rate. 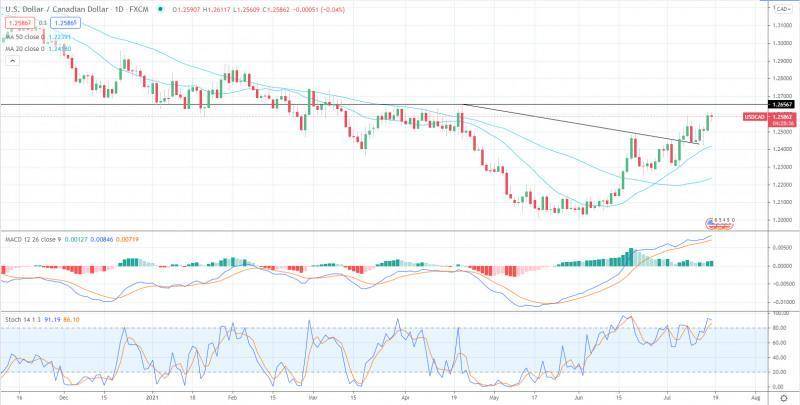 U.S. Retail sales unexpectedly increased in June rising 0.6% compared to expectations that spending would decline by 0.3%. Sales surged 18.0% year over year. Most of the spending was in restaurants and hospitality as people started to travel and eat out in June. Excluding automobiles, gasoline, building materials, and food services, retail sales increased 1.1% last month. This is a robust gain for a matrix that corresponds most direction with GDP growth. Recall, approximately 66% of U.S. GDP comes from consumer spending.