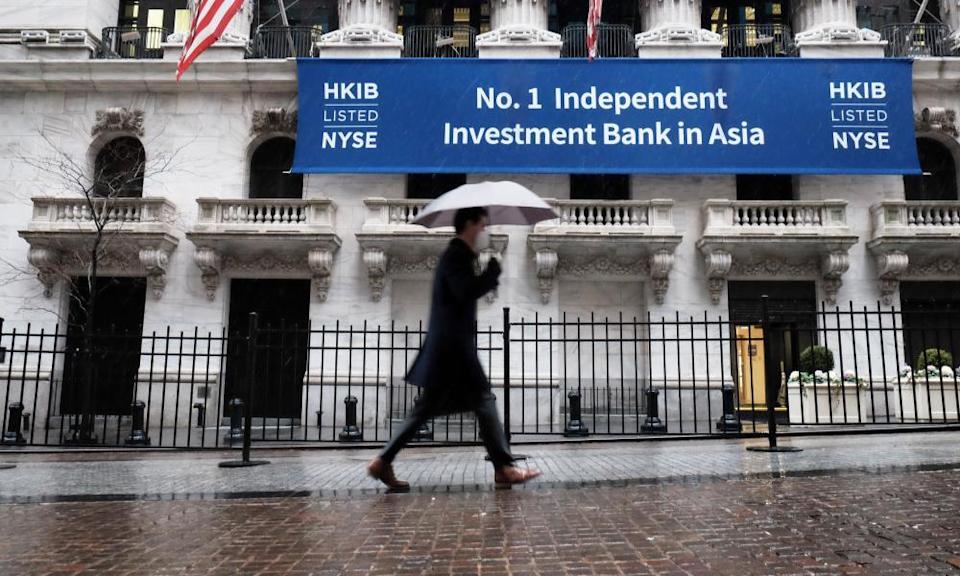 US stock markets were hit by another wave of wild trading on Monday as investors worried that the Federal Reserve would wind down its support for the economy faster than expected and fears of a possible Russian invasion of Ukraine intensified.

Stock markets hit record highs after highs last year. But so far this year the S&P 500 has fallen at its fastest rate on record, according to data compiled by Bloomberg, and on Monday it briefly fell 10% from its most recent high on 3 January before regaining ground.

The Fed meets this week and on Wednesday will give a clearer picture of how quickly it will raise interest rates in order to tackle soaring inflation.

The selloff swept across other assets, driving down the price of oil as well as bitcoin and other cryptocurrencies. B​​itcoin too regained ground but has now shed half its value since hitting record highs around $69,000 in November.

Jack Ablin, founding partner and chief investment officer at Cressett Capital, said that, with some provisos, the worst of the falls might be over. “I don’t think this will go for much longer,” he said. “Most of the damage has been done.”

Ablin said he expected more problems ahead for some tech companies, which enjoyed a boom period during the pandemic. Some of the companies that grew exponentially during lockdowns, including Netflix and Peloton, were already suffering sharp share price falls and there would be more to come, he said. “Tech got way ahead of itself,” he said.

He added that if the situation in Ukraine deteriorated or China saw Russia’s move as an opportunity to push its claims on Taiwan, markets were likely to fall again.

“Dealers are worried about the prospect of a war in eastern Europe, as the human and economic cost would be huge. Some central European economies, like Germany, are heavily dependent on energy from Russia, and should a war break out, it’s a possibility those energy supply lines would be cut, which would cripple economic output in the EU,” David Madden, a market analyst at Equiti Capital, told Reuters.