Upside for Okta After Earnings Beat

Powell described several upsides to the company, including recent developments from the Biden administration that “the government must move toward a zero-trust architecture and government agencies must adopt multi factor authentication.” Okta has continued to strike deals with the United States government and its growth is exponential.

Okta also increased its revenue guidance and expects 35% growth for the next five years. However, Powell also expressed some downsides.

Firstly, Okta’s report did not make it clear how its recently acquired software Auth0 will factor into the company’s future growth. Powell noted that acquisition losses from Auth0 were greater than anticipated. Additionally, after three months on the job, the CFO is departing from the company, which could stir anxiety among investors.

When providing his thesis, Powell was positive about the company, stating “OKTA is dominating its target market and successfully expanding into natural adjacencies.”

Consensus among analysts on TipRanks is a Moderate Buy based on 10 Buy and 7 Hold ratings. The average analyst price target of $275.06 per share implies approximately 26% upside potential over the next 12 months. 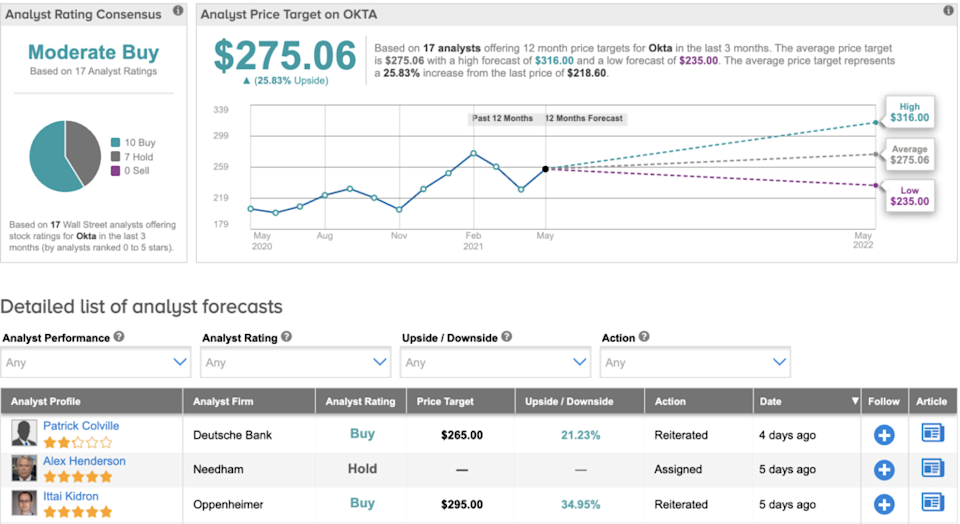