Of the several electric vehicle (EV) companies promising a powerful long-range truck, Lordstown Motors Corp. (RIDE) hopes to be the first to bring one to market. However, the Ohio-based company is not without its obstacles. Securing capital, customers, beating competitors, and overcoming supply chain challenges are critical for RIDE’s success. (See RIDE stock analysis on TipRanks)

In a May 28 report published by Emmanuel Rosner of Deutsche Bank, the analyst outlined these issues with a cautious outlook. Rosner rated the stock a Hold and assigned a price target of $8 per share, which reflects downside potential of 19.19%.

Rosner is optimistic about Lordstown’s niche in the nascent market, recognizing the opportunity for the company to take advantage of the shift in demand for traditional American pickup trucks to the growing need for EVs. This need will come from businesses with fleets of trucks that will need to abide by governments' increasingly strict emission standards, and individual customers attracted by EV tax credits.

The Biden administration intends to commit $174 billion towards stimulating the EV market, accelerating its growth, and scaling up production. RIDE will need this capital injection, as overhead production costs and its need for vertical integration remain its biggest challenges. Rosner explains that raising near-term capital is imperative for the future of the company.

Furthermore, time is very much against Lordstown Motors, as it must bring its “Endurance” electric pickup truck to market before any of its competitors beat it to the punch. Once available, the company needs to sell as many units as possible, as the Ford Motor Company (F) has already announced that its Lightning F-150, a direct rival with a lower retail cost, is expected to be launched next year. Unfortunately for Lordstown, Ford already has a better service network and greater production capabilities.

RIDE plans to begin delivering its sole product in Q4FY21, but has no committed customers as yet and has already slashed its initially estimated sales in half to just 1,100 units. Rosner mentions that the truck is scalable and modular and that its design could be used in future Lordstown products. The Endurance is said to be capable of traveling up to 250 miles on a single charge.

Rosner elaborated that he expects the stock to trade at a discount due to the company’s “operational, financial and strategic uncertainty,” and the fact that it “has no ready factory and has produced no production-ready vehicles.” Rosner went on to state that he finds it “difficult to acquire much conviction about the company’s ability to execute and ultimately succeed in the pickup fleet market.”

According to Rosner, the ride may be soon going downhill for Lordstown Motors if funding cannot be secured, and soon.

Consensus among analysts on TipRanks is a Hold based on 1 Buy, 4 Hold, and 2 Sell ratings. The stock has an average analyst price target of $9.57, representing downside potential of 3.33% from current levels. 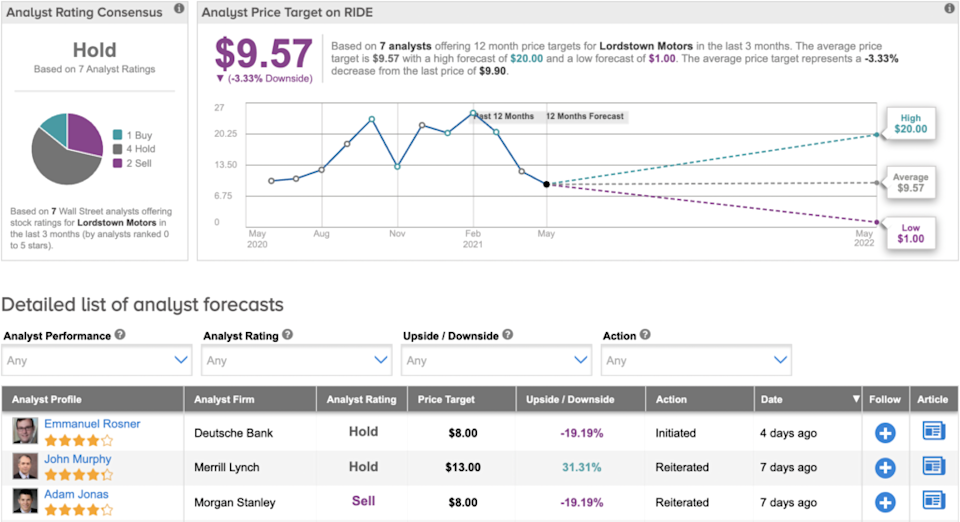