U.S. Shale On Track For One Of Its Best Years Ever

After seven consecutive weeks of gains, oil prices have gone into reverse gear once again, thanks mainly to the latest OPEC+ spat that left everyone wondering what to expect next.

Major cracks appeared in the ministerial meeting with the United Arab Emirates continuing to block an agreement because it wants to increase its oil production before demand falls as per WSJ. The market fears that the UAE might "want out of OPEC so it can pump 4M bbl/day and make hay while the sun shines," Phil Flynn, market analyst at Price Futures Group, has told MarketWatch.

The UAE's objection derailed a proposal to ease existing output curbs in a controlled manner and allow production to rise by 400K bbl/day each month through December leading to a planned OPEC+ meeting being called off with no new suggested date for the next gathering. This, in effect, leaves the organization’s current production limits in place. However, there’s a growing sense that the latest development is not necessarily bullish for oil markets because of the risk that the whole thing might fall apart and become a free-for-all, meaning a lot more oil potentially gets put on the market.

Still, oil prices remain within touching distance of recent multi-year highs, with WTI trading at $72.02/bbl while Brent was changing hands at $73.34/bbl on Thursday morning. In fact, the latest bout of market volatility is within volatility levels normally seen around the July 4 holiday.

Indeed, Rystad Energy says the U.S. shale industry is on course to set a significant milestone in 2021: Record pre-hedge revenues.

According to the Norwegian energy navel-gazer, U.S. shale producers can expect a record-high hydrocarbon revenue of $195 billion before factoring in hedges in 2021 if WTI futures continue their strong run and average at $60 per barrel this year and natural gas and NGL prices remain steady. The previous record for pre-hedge revenues was $191 billion set in 2019.

The estimate includes hydrocarbon sales from all tight oil horizontal wells in the Permian, Bakken, Anadarko, Eagle Ford, and Niobrara. 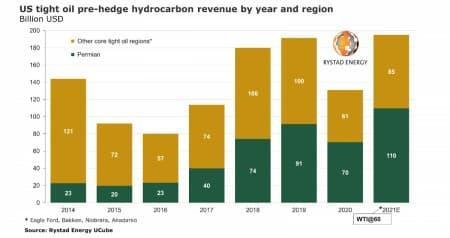 That said, Rystad says corporate cash flows from operations may not reach a record before 2022 due to hedging losses amounting to $10 billion worth of revenue in the current year.

Thankfully, cash flows are likely to remain healthy due to another critical line item failing to keep up: Capital expenditure.

Shale drillers have a history of matching their capital spending to the strength of oil and gas prices. However, Big Oil is ditching the old playbook this time around.

Rystad says that whereas hydrocarbon sales, cash from operations and EBITDA for tight oil producers are all likely to test new record highs if WTI averages at least $60 per barrel this year, capital expenditure will only see muted growth as many producers remain committed to maintaining operational discipline.

“From the upstream cash flow perspective, we see reinvestment rates falling to 57% in the Permian and to 46% in other oil regions this year. Corporate reinvestment rates are generally expected to be in the 60-70% range this year due to debt servicing and hedging losses,“ Artem Abramov, head of shale research at Rystad Energy, has said.

In other words, oil and gas companies are likely to keep capex muted even with higher oil prices, meaning a lot of that money is likely to be returned to shareholders in the form of dividends and share buybacks.

There are growing fears that high oil prices could hasten a comeback by U.S. shale and potentially muddy the waters for everyone.

The U.S. industry is producing about 11 million barrels a day, down from about 13 million before the pandemic. There’s a lot of uncertainty regarding when U.S. shale will make a full comeback.

According to an analysis by the authoritative Oxford Institute for Energy Studies, rising oil prices could allow for a significant return of U.S. shale to the market in 2022, potentially upsetting the delicate rebalancing of the global oil market.

“As we enter 2022, the US shale response becomes a major source of uncertainty amid an uneven recovery across shale plays and players alike. As in previous cycles, US shale will remain a key factor shaping market outcomes,” Institute Director Bassam Fattouh and analyst Andreas Economou have said.

Fattouh and Economou have warned that the market could flip into a surplus by the fourth quarter of 2022 if the U.S. shale growth hits the upper bound of 1.22 million barrels per day and global demand recovery turns out to be slower than expected.

In other words, even a partial recovery by U.S. shale might be enough to offset the delicate balance that OPEC+ has so far managed to establish in the markets.

Those fears seem warranted considering that Rystad estimates that the Permian Basin alone can grow comfortably even in a $45 per barrel world, likely plateauing at 1 million bpd above its pre-Covid-19 production peak by the middle of the current decade.

However, we think it will take at least two years before U.S. shale makes a significant comeback. Right now most shale companies are reluctant to invest, preferring to pay down debt and hike dividends. Investors have been taking a dim view of companies that have continued aggressive drilling campaigns, and that sentiment is unlikely to change any time soon.