The U.S. Dollar is edging higher against a basket of major currencies early Tuesday, helped by firm Treasury yields. Volume is on the light side as traders awaited the testimony from Federal Reserve Chair Jerome Powell at 18:00 GMT.

Powell is scheduled to testify before the House of Representatives on the central bank’s response to the pandemic. His remarks, which were released ahead of the hearing Monday evening, are likely to support the notion that the Fed is ready to soon start discussing removing some of its unprecedented stimulus measures enacted during the pandemic.

In other news from Monday, hawkish Fed officials such as St. Louis Fed President James Bullard and Dallas Fed President Robert Kaplan had remarked on the risks of acting too slowly. Meanwhile, New York Fed President John Williams said it was too soon to shift policy. 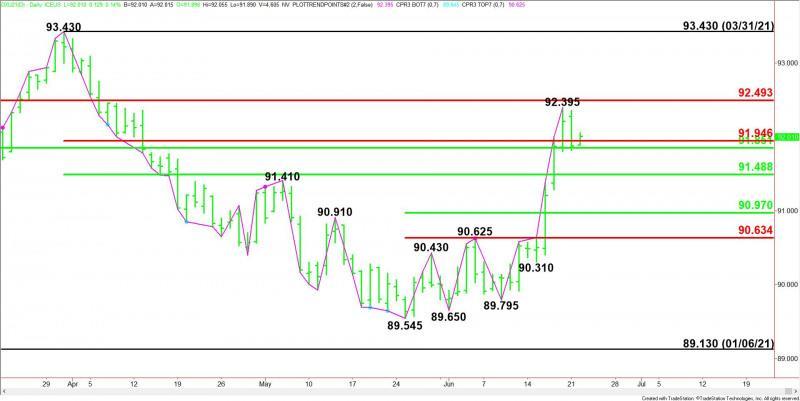 The main trend is up according to the daily swing chart. A trade through 92.395 will signal a resumption of the uptrend. A move through 89.795 will change the main trend to down. This is highly unlikely but there is room for a normal 50% to 61.8% retracement of the recent rally.

The direction of the September E-mini U.S. Dollar Index on Tuesday will likely be determined by trader reaction to 91.850 and 91.950.

A sustained move over 91.950 will indicate the presence of buyers. If this move creates enough upside momentum then look for a surge into 92.395 to 92.495. The latter is a potential trigger point for an acceleration to the upside.

A sustained move under 91.850 will signal the presence of sellers. If this move generates enough downside momentum then look for a test of 91.490. Taking out this level could trigger an acceleration into 90.970 to 90.635.