The U.S. Dollar is edging higher against a basket of major currencies on Friday, recovering most of its losses following dovish comments from U.S. Federal Reserve Chairman Jerome Powell on Wednesday.

Firm U.S. Treasury yields are helping to boost the dollar’s appeal as well as a weaker Euro, which is a major component of the dollar index, representing about 57% of its value.

The index has climbed in recent weeks as investors get more optimistic about the outlook for the greenback, driven by an increasingly upbeat assessment of the U.S. economy by the Federal Reserve, which has brought forward the time frame on when it will next raise rates.

On Thursday, the greenback was helped by U.S. data that showed the number of Americans filing new claims for unemployment benefits fell the week-ending July 9 as the labor market steadily gains traction. 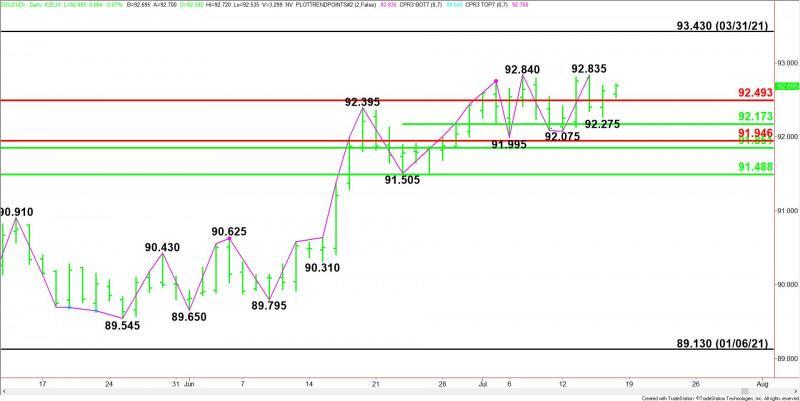 With the main trend up, all of these levels are potential support, the best being the price cluster at 91.950 to 91.850.

Based on the early price action, the direction of the September U.S. Dollar Index on Friday is likely to be determined by trader reaction to 92.495.

A sustained move over 92.495 will indicate the presence of buyers. If this move creates enough upside momentum then look for buyers to take a run at 92.835. This is a potential trigger point for an acceleration to the upside with 93.430 the next potential upside target.