As I write Friday morning, all the major stock indices are up, with the Nasdaq’s 1.2% gains leading the charge.

Why are investors in a good mood?

Hold onto that a moment – we’ll circle back…

***“Warning signs for a potential correction”

Not exactly a heartwarming subject line for an email…

Yet that’s how our technical experts, John Jagerson and Wade Hansen, titled the email reminder about their Wednesday webinar for subscribers.

So, what are these warning signs? And what, exactly, are they suggesting about a correction?

As we’ll dive into today, there are two dynamics we need to be watching. As they go, so too might go U.S. stocks.

Before we unpack what’s happening, for newer readers, John and Wade are the analysts behind Strategic Trader. This premier trading service combines options, insightful technical and fundamental analysis, and market history to trade the markets, whether they’re up, down, or sideways.

To identify profitable trade set-ups, they analyze a variety of data points, ratios, chart patterns, indicators, and global markets – it’s an arsenal of investment resources that help provide clues about where sectors and specific stocks are likely headed.

So, what are John and Wade eyeing today that’s behind the headline?

From their latest update:

This week’s update will explain why currency movements in Japan and stock volatility in China can be great warning signs for a potential correction in the U.S. markets if economic data starts to show slowing growth.

So, how concerned should we be?

***Why we should be cheering for a weak yen

Why should U.S. stock investors care about the Japanese yen?

Because, as John and Wade point out, a weak yen is usually a very positive signal for U.S. stock markets.

It is very cheap to borrow yen and use those funds to buy riskier assets (like stocks) that offer a higher yield. This borrowing effectively weakens the yen.

If the yen is falling in value, investors are likely to continue borrowing because they expect to repay their loans with cheaper yen in the future, which further reduces their borrowing costs.

One of the reasons the market has been so bullish is because the yen has been much weaker than expected.

As you can see in the following chart, a declining yen has even outpaced a historically weak U.S. dollar. 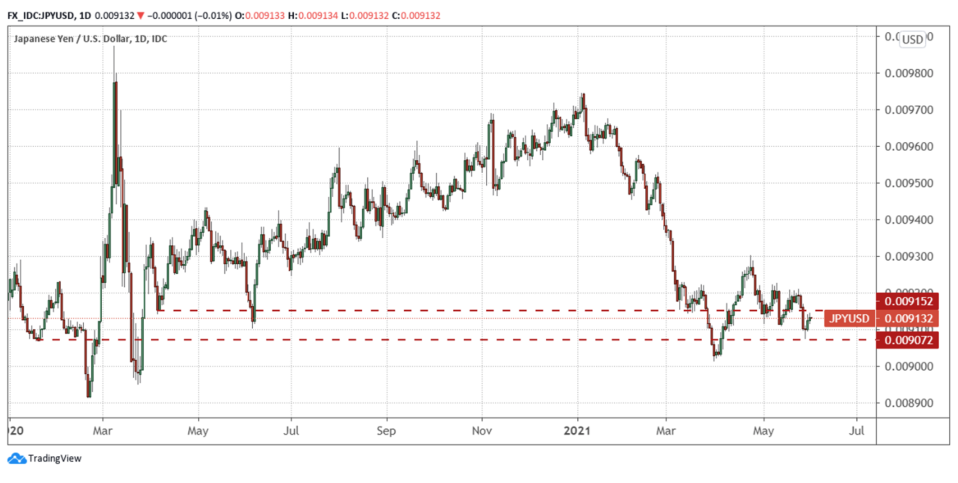 So, a weak yen tends to encourage the borrowing of yen to buy stocks. Often, that means U.S. stocks. Therefore, we want the yen to remain weak.

How likely is that to happen?

Take another look at the chart above…

We see the yen dropping sharply beginning at the start of the year. So far, so good.

But beginning right around April, the yen bounces, rallying until nearly May. After that it’s been trading in a narrowing wedge pattern. In other words, it could break either way.

If the currency can break to new lows, it would likely indicate there is potential for additional short-term upside for stocks…

If support holds, investors could see that as an early warning signal that some capital may start flowing back out of equities.

If we expand our timeframe, we’ll see that there is room for the yen to drop substantially lower. As you can see below, back in 2015, it was roughly 12% lower than it is today. 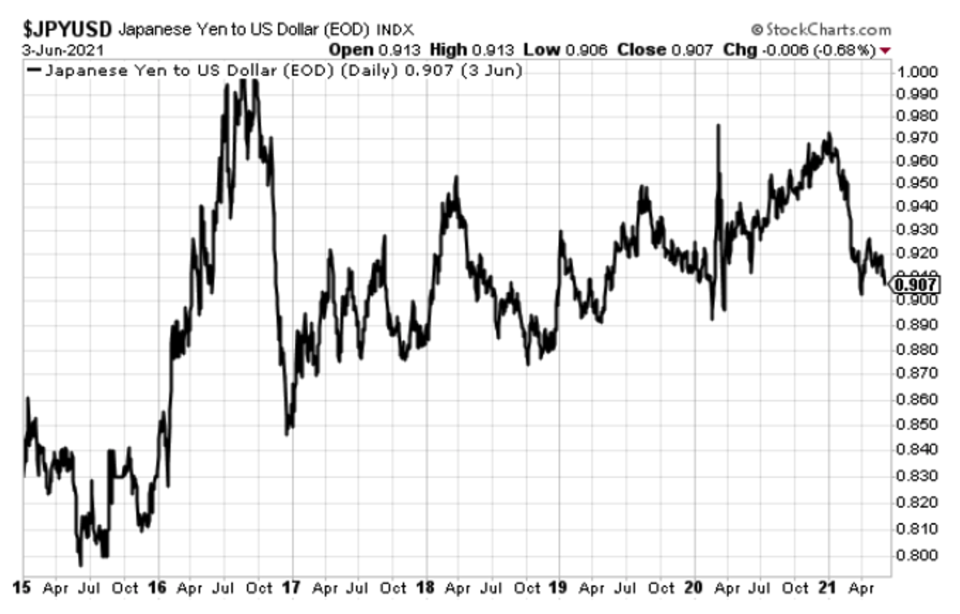 So, keep the yen on your radar.

I’ll point out that between Wednesday, when John and Wade sent out their update, and this morning, the yen has fallen relative to the dollar. That’s what we want to see.

***Chinese stocks are another good leading indicator for the U.S. market

Let’s jump back to John and Wade:

As you might imagine, not all the borrowing in yen is directed to U.S. stocks. A lot of it is used to finance stocks and real estate assets in China.

Demand for Chinese assets has driven the Chinese yuan’s value up nearly 13% since the market bottomed last May.

John and Wade point out an interesting characteristic of the Chinese market – namely, that small leveraged investors dominate the market.

So, if these heavily-leveraged Chinese investors grow worried about increasing borrowing costs, it can mean a sea of capital flowing out of Chinese stocks…quickly.

Are we seeing that happen now?

Although we don’t see a reason to panic yet, Chinese stock indexes are starting to look overheated again and may be near a top.

But again, what does any of this have to do with U.S. stocks?

That’s where John and Wade draw out an interesting dynamic.

Most U.S. investors do not realize that the relatively skittish Chinese stock traders represent a good bellwether for U.S. stocks and risk appetite among traders more generally.

Over the last few years, if Chinese stock indexes (we have used the Hang Seng index below) form a series of lower highs while the S&P 500 forms higher highs, a correction or bear market is almost certain to be less than eight weeks away.

As you can see in the following chart, the Hang Seng (red line) has formed this double top divergence pattern with the S&P 500 (green line) before each of the last four major corrections. 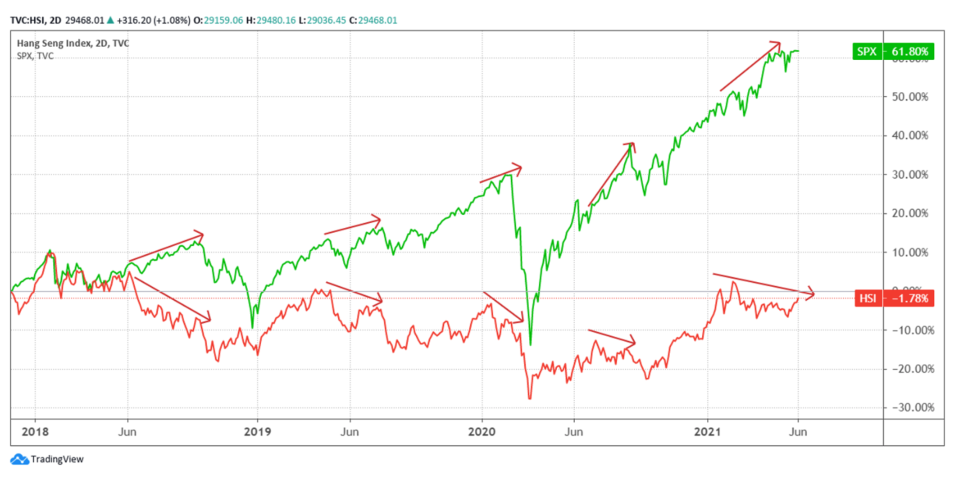 Currently, we can’t argue that a second lower top has been formed on the Hang Seng yet, but it’s close enough that we should watch it very carefully.

It’s still too early to argue that the Hang Seng has made a second, official top, but since Wednesday, we’re not moving in the right direction.

Below, we look at the Hang Seng over the last month. Notice the sharp drop in the last few trading sessions. 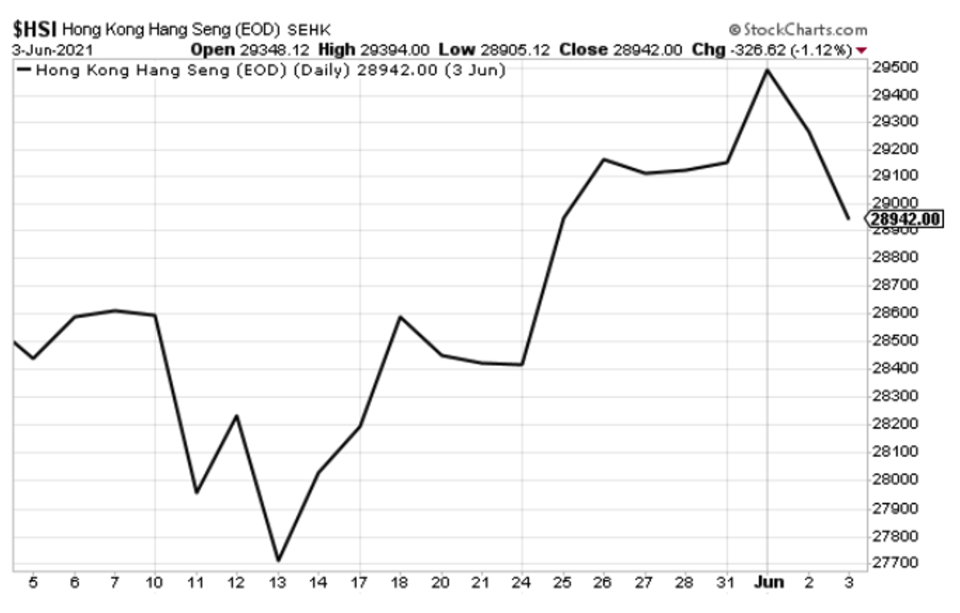 While it could reverse and pop higher, this is not what John and Wade wanted to see.

So, two international markets, two inflection points. And so far, one headed in the direction we want, the other not as much.

But let’s add a little good news into the mix…

Two weeks ago today, we featured analysis from John and Wade in the Digest that focused on inflation.

In short, John and Wade suggested watching 10-year Treasury Yield as a good barometer for how concerned traders were about inflationary pressures.

If the 10-Year yield kept moving higher and challenged its previous high of 1.77%, John and Wade said that this would likely put downward pressure on the S&P. But if the 10-Year yield held, or even pulled back, it would offer support.

As I write Friday morning, the 10-Year yield sits at 1.56%, offering substantial breathing room from its recent highs.

***Despite the uncertainties coming out of Asia, John and Wade remain bullish

John and Wade ended their Wednesday update by refocusing their subscribers on employment numbers back here at home.

From their update – remember, this was on Wednesday:

Although the rest of this week is likely to be volatile, we are still bullish.

And despite the negative surprise from the BLS last month, we anticipate good hiring numbers this month.

The two international benchmarks we evaluated in this week’s update should look less worrisome if the BLS data matches our expectations for 700,000+ jobs added on Friday.

It turns out, the payroll numbers fell short of this goal. They only increased 559,000 versus the official estimate of 671,000 from a Dow Jones survey.

So, circling back to the top of today’s Digest, why are stocks up today?

Because the numbers were good enough to quell fears that the economy has stalled out, but they weren’t so good that they suggest the Fed needs to throw cold water on the economy.

One of the biggest questions today is when the Fed will raise interest rates and tighten its monetary policy.

Too much economic growth, too fast, would likely accelerate the timing of the Fed having to pull the reins on the economy. Wall Street doesn’t want that.

So, today’s numbers were a bit like Goldilocks – not too bad, not too good, just right to keep the party going.

We’re beginning to run long, so we’ll wrap up.

Keep your eye on the yen – we want it to remain weak. Watch the Hang Seng – we want it to rally. Also, track the 10-Year yield – lower and stable should support more stock gains. Finally, we’ll be on the lookout for good economic data, but not too good.

As to how all this actually plays out, we’ll keep you up to speed here in the Digest.