Vacation spending up, home spending down

In early April, we highlighted two wild charts from the economics team over at Bank of America that showed the dramatic shift in consumer habits during the pandemic and through the spring as the economy re-opened and life began to normalize.

And in an updated note to clients, that same team's work shows the progress continues.

Through late March, spending on airlines was up almost 400% over last year, which comes as little surprise: airline spending actually fell by more than 100% at one point last spring as refunds outpaced new bookings. Spending on furniture also spiked during the pandemic as folks were stuck at home and looking to refresh their surroundings.

And while changes in these categories make clear that the economy is continuing to heal, consumer habits are still not quite looking like the Before Times.

Through May 22, Bank of America's data shows that consumer spending on furniture remained up 29% against 2019 levels, indicating a still-elevated investment in peoples' homes. Spending on airlines had also continued to recover, but was still running 18% below 2019 levels. 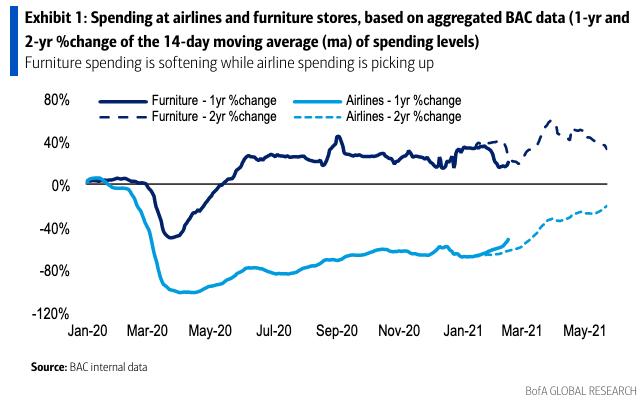 Spending on airlines and furniture went opposite directions during the pandemic, but as the economy re-opens these trends are starting to converge back towards something like normal. (Source: Bank of America Global Research)

At our last check on these data, furniture spending was some 52% above 2019 levels while airline spending remained 35% below the 2019 trend. So although in about six weeks we've seen the spread between 2021 habits and 2019 habits cut in half, there is still clearly a ways to go before things are "normal." If, that is, we agree that 2019 consumer habits are what will constitute normal.

As for what these charts look like on their own, the last time we highlighted this data massive distortions from 2020 were still showing up. Airline spending was almost off the chart while furniture spending still appeared to be on a historic tear.

But the team over at BofA has now backed out data from beyond February 28, 2020 so we can see two charts that look a lot more manageable while still capturing the magnitude of the changes consumer habits continue to undergo. 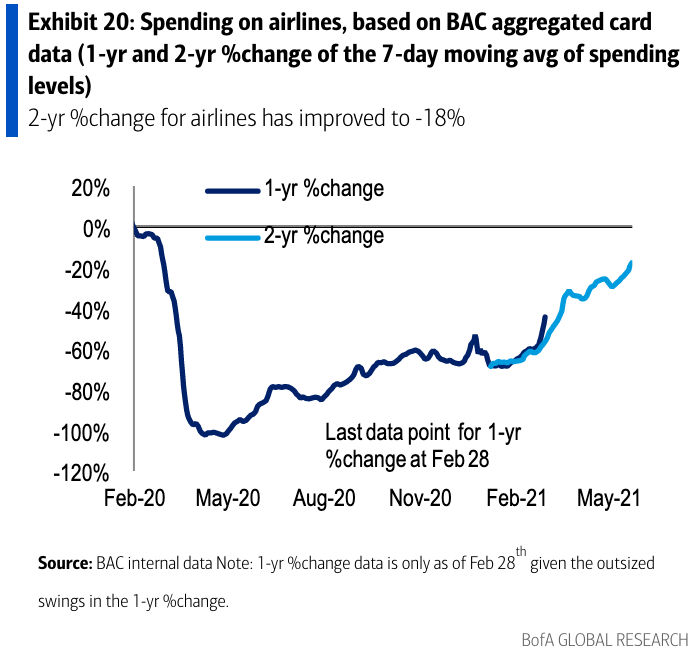 Airline spending is slowly clawing its way back to 2019 levels, but is about 20% below what had previously been seen as normal. (Source: Bank of America Global Research) 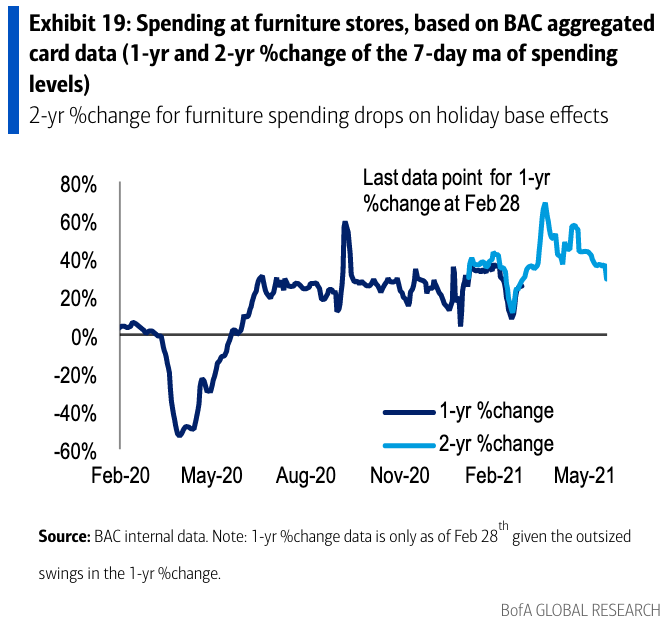 Consumer spending on home furnishing is still quite elevated but slowly moving back towards 2019 levels as the economy re-opens. (Source: Bank of America Global Research)

And while these two categories offer a great contrast in COVID-specific trends continuing to make their presence known, BofA's overall read on the consumer shows the spending backdrop remains quite robust.

Consumer spending is now running around 18% above 2019 levels and 31% above last year, Bank of America's data show.

And as we look forward at what other trends may or may not persist, BofA's latest report surfaces another habit shift we'll be watching closely — online grocery spending has remained higher than pre-COVID levels but online spending for clothes has declined.

Perhaps a sign of life for the American mall after a decade of stories about its death. Or perhaps a sign that after the mall, the local grocery store is next.

By Myles Udland, reporter and anchor for Yahoo Finance Live. Follow him at @MylesUdland

Editor's Note: Morning Brief will be observing Memorial Day. We will be back Tuesday, June 1.

This dollar store says it will open more than 1,000 new stores