Oil prices rallied to their highest levels in two and a half years after OPEC+ recently agreed to extend its historic production cuts. On Monday morning, WTI was trading at $71.66 per barrel while Brent crude was changing hands at $73.49, levels they last touched in 2018.

Oil and gas stocks have followed suit, with the energy sector’s broad benchmark, the Energy Select Sector SPDR ETF (NYSEARCA:XLE) up 38.2% in the year-to-date.

Small-cap oil and gas stocks have, however, been massively outperforming their larger brethren.

The sector’s favorite benchmark, the PowerShares S&P SmallCap Energy (PSCE), has nearly doubled the gains by large oil stocks with a 72.8% YTD return, a sharp turnaround from the situation last year.

Here are the best-performing small-cap oil stocks so far this year, but caution is necessary because in today’s market, “performing” well doesn’t necessarily mean what it used to before the retail investor craze: 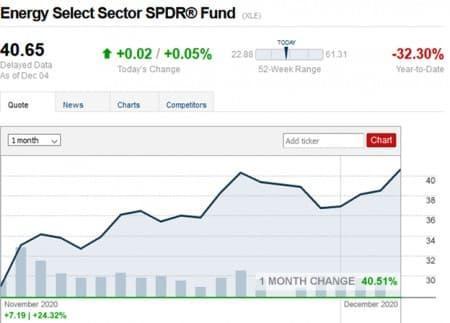 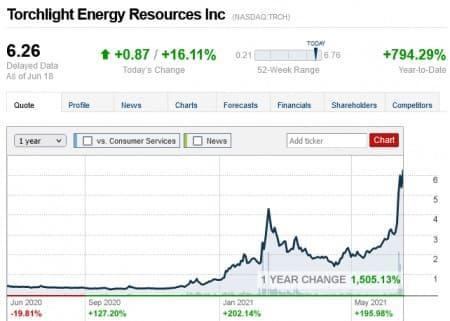 Torchlight Energy Resources (NASDAQ:TRCH) is a Texas Wildcatter that engages in the acquisition, exploration, exploitation, and/or development of oil and natural gas properties in the United States. This isn’t just one of the hottest small-cap oil stocks right now—it’s one of the hottest retail investor stocks because it’s now being targeted by the “meme-stocks” crew.

Tread carefully, though. This one is only one of the “best-performing” because of the retail investor hype–not because it’s been proven to be a sound company with solid fundamentals. Behind this one is a reverse merger and a series of companies that don’t make that much sense; yet, it’s the hottest game to play right now.

Torchlight has been in the spotlight since 2015 after the company purchased a neglected oil patch in the Orogrande Basin on the cheap back in 2015.

The Orogrande Basin is actually considered a pariah among E&P circles, and Torchlight ostensibly set out to prove the naysayers wrong. The company allegedly plans to walk off the beaten track by employing Frac tech and believes the patch could yield as much as a billion barrels of oil–which would be a record for a small-cap, but is just as likely a pump-and-dump setup. It’s hard to see now through all the retail investor hype.

The recent rally was apparently driven by the potential merger with Metamaterial Inc. (OTCPK:MMATF), a Canadian-based designer, developer, and manufacturer of advanced materials, metamaterials, and functional surfaces to control light and electromagnetic waves.

This is a reverse merger in which Metamaterial will get a NASDAQ listing, while TRCH gets paid for its shell in a deal that largely seems designed to tap into current market enthusiasm for green energy assets.

Metamaterial holders will get 75% of the shares in the new company, while TRCH holders will receive 25%. Torchlight shareholders will also get a distribution that will allow them to receive the proceeds from the sale of the oil and gas assets (or the rights to a spin-off of those assets).

Definitely do your homework. 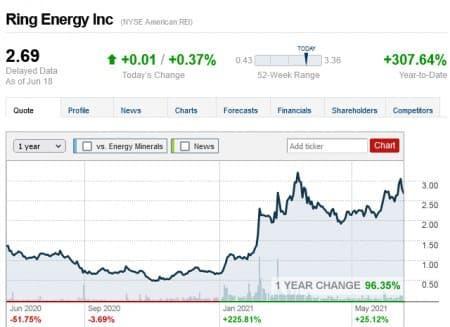 As of December 31, 2020, the company proved reserves consisted of approximately 76.5 million barrels of oil equivalent(BOE) as well as interests in 45,000 net developed acres and another 31,700 net undeveloped acres. Ring Energy, Inc. primarily sells its oil and natural gas production to end users, marketers, and other purchasers.

In April 2020, REI announced that it had entered into a purchase and sale agreement on its Delaware Basin Acreage consisting of approximately 20,000 net acres with a sale price of $31.5 million.

The considerable non-refundable deposits that Ring Energy received painted it in a good light by proving the value of its assets to shareholders. The company is also likely to receive considerably more for the same asset in the future, given that oil prices have climbed more than 30% since then. 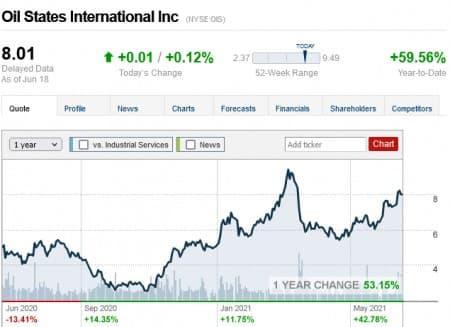 The OFS services sector was one of the hardest hit by the oil price crash and Covid-19 pandemic as job orders dried up. Luckily, the sector is in a much better place right now thanks to economies re-opening and oil demand rising.

Indeed, the previously downtrodden oilfield services sector is showing very promising signs that business is close to returning back to normal.

It’s a clear sign that U.S. crude production is ticking back up after a very depressing period. For the first time since the pandemic hit, U.S. shale output is expected to rise by 38,000 barrels per day in August despite generally flat spending by oil and gas producers.

The OFS sector’s biggest representative, the VanEck Vectors Oil Services ETF (NYSEARCA:OIH), is up 45% in the year-to-date, better than the 38% gain by the Energy Select Sector SPDR Fund (XLE).

They say a rising tide lifts all boats, and the ongoing boom could improve revenue and margins for smaller players like Oil States International.