This Pharma Stock Is a Surefire Bet for July

With Independence Day now behind us and the second half of the year officially underway, investors are setting out their investment strategies for the back nine of 2021. The pharmaceutical industry has been in focus over the past 12 months, as the ongoing Covid-19 pandemic continues to make headlines. And while vaccine rollouts have eased some of Wall Street's fears, Abbott Laboratories (NYSE:ABT) is still a key player in the world of pandemic stocks. More specifically, the pharma name received emergency use authorization from the U.S. Federal Drug Administration (FDA) for its 15-minute antigen test roughly one year ago, which coincides with its healthy 27.3% year-over-year lead.

It looks like Abbot Laboratories stock may have more room to run, too, per data from Schaeffer's Senior Quantitative Analyst Rocky White. The equity recently appeared on White's list of the best performing stocks on the S&P 500 in July, going back 10 years. In fact, the security has seen positive monthly returns during this time period nine out of ten times, with a 4.8% pop on average. At last check, the shares are up 0.3% at $118.41, meaning a move of similar magnitude would place ABT back above $124 by the end of the month. 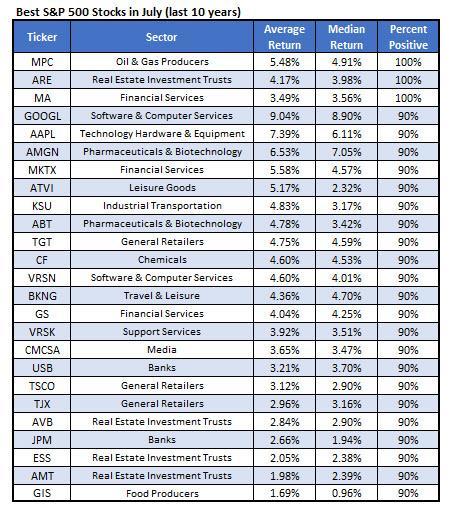 A similar pop would also put Abbott Laboratories stock not too far off from its Feb. 12, all-time high of $128.54. Plus, the security's June bounce off the $105 level is only picking up more steam, with shares now eyeing their seventh win in eight sessions, as well as a close above the 100-day moving average for the first time since May 11. 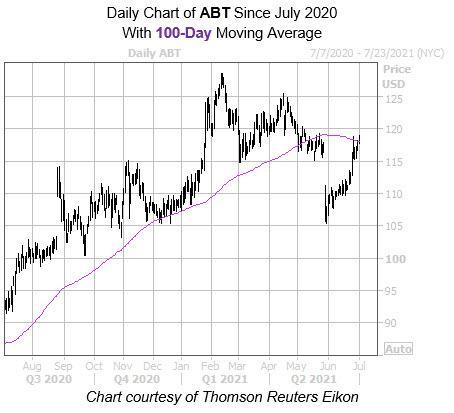 A shift in sentiment over in the options pits could create additional tailwinds for ABT. This is per the equity's Schaeffer's put/call open interest ratio (SOIR), which sits higher than 93% of readings from the past year. This means short-term options traders have been more put-biased than usual.

What's more, ABT premiums are a bargain at the moment. The security's Schaeffer's Volatility Index (SVI) of 16% stands higher than only 1% of readings in its annual range, suggesting options traders have rarely priced in lower volatility expectations during the past 12 months.