These 25 Stocks Are the Worst to Own in July

The major benchmarks are celebrating a winning first half of 2021. However, despite all the optimism, it is always good idea to keep an eye on stocks that have a tendency to underperform at this point in the year. For your convenience, we have compiled a list of the worst stocks to own during the month of July, with General Electric Company (NYSE:GE) standing out amongst them. Below, we will dive into how the stock has performed recently, and why now could be the perfect opportunity to buy puts. 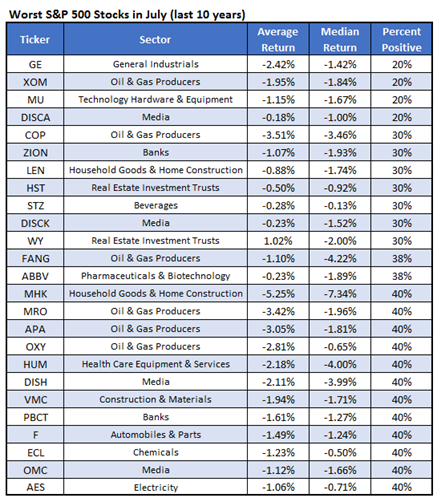 According to Schaeffer's Senior Quantitative Analyst Rocky White, General Electric stock averaged a July loss of 2.4% over the past 10 years, and has finished the month positive only twice. The security is the only general industrials name to appear on the list, and is also the number one stock to avoid.

From its current perch of $13.47, a similar move lower would put GE back below the 60-day moving average, a trendline that pressure the equity lower during pullbacks in May and June. Still, its worth noting that the security had added 114.7% over the past nine months. Plus, the last time we checked on GE, it had been named a "top idea" at Goldman Sachs. 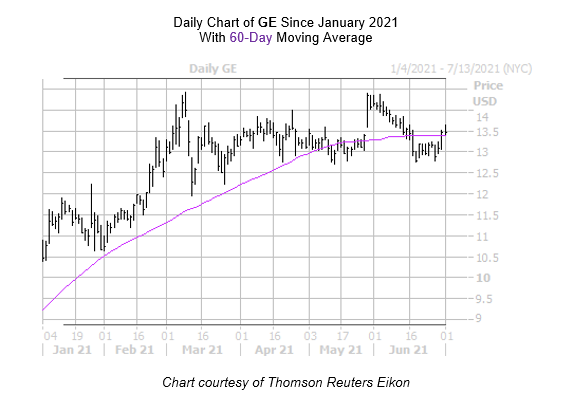 Options traders have been betting on a move higher, though an unwinding of this optimism could ultimately put additional pressures on the shares. At the International Securities Exchange (ISE), Chicago Board Options Exchange (CBOE), and NASDAQ OMX PHLX (PHLX), General Electric stock's 10-day call/put volume ratio of 7.07 ranks in the elevated 87th percentile of its annual range. In other words, calls are being picked up at a faster-than-usual clip.

Now seems to be a prime time to weigh in on GE's next move with options, as the equity's Schaeffer's Volatility Index (SVI) of 30% sits in the 8th percentile of the past 12 months. This means option traders are pricing in relatively low volatility expectations at the moment.