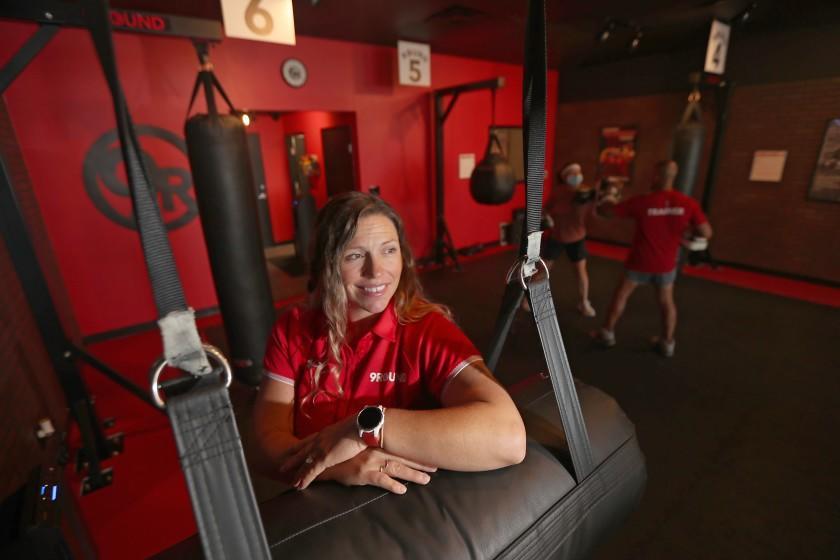 Ashley Richardson, franchise owner of 9Round Fitness gym in Long Beach, is struggling to fill a personal trainer job — usually a competitive one at boutique gyms — as businesses strain to entice people back to work. (Luis Sinco / Los Angeles Times)

A short-staffed restaurant owner is delivering pizza himself, while his co-owner wife has stepped into their vacant general manager role. In another restaurant’s kitchen, a cook with no experience is working the stoves. A usually competitive trainer job at a boutique gym has been open for three months.

As the American economy awakens from the slumber of COVID-19, the job market is shape-shifting in ways economists and business owners say they haven’t seen before — and the transition in California is particularly patchy.

Job seekers are ignoring positions they once jumped at. Employers are straining to hire as they gauge whether the difficulties are temporary or signify a more lasting shift.

Until a few months ago, a trainer opening at the gym would get up to a dozen applicants within a week or two, Richardson said. She has now been searching for a trainer for three months, with just four applications in hand.

"Don’t think everything’s OK now because businesses are open,” said Richardson, who has considered raising her above-minimum hourly wage. “If anything, now we’re in the hardest part.”

Some employers have already raised wages and reconfigured jobs to make them more appealing. And while restaurants, hotels and retail stores desperately seek workers to meet surging demand, other sectors are under less pressure as consumers readjust to the lifting of COVID restrictions.

“There's simply no labor shortage when you're talking about finding house cleaners for a hotel — there is a shortage of workers who want to work at what you're offering,” said Sylvia Allegretto, a UC Berkeley labor economist. She said the country is experiencing a “wage and benefits shortage.”

A labor shortage implies there aren’t enough available workers to fill open jobs, but this is not the case nationally, or in California. National unemployment in May was at 5.8%, with California tracking higher at 7.9%. Millions are seeking work.

Economists say it’s only a matter of time before the roles are filled, and the least desirable jobs with the lowest pay and benefits will be the last to go. They don't see the job market as a sign of shifting economic forces unleashed by the pandemic, or of a workforce made comfortable or lazy by stimulus payments.

“Nothing about this is going to be permanent,” said Heidi Shierholz, a senior economist at the left-leaning Economic Policy Institute.

Yet some trends are emerging clearly. The struggle to fill jobs is hitting smaller businesses disproportionately. Workers may be in a prime position to secure better conditions and pay, but without changes at the federal level, economists said the gains will be short-lived — and white-collar workers may gain the most, entrenching inequality.

California, in particular, tends to be slower coming out of economic downturns than other parts of the country. The state has a high percentage of jobs in the leisure and hospitality industry, which are slow to bounce back after recessions. The unemployment rate in this sector is 10.1%, nearly double the national average.

“During periods of rapid expansion, it’s always difficult to hire workers quickly,” said Rob Valletta, an associate director of research at the Federal Reserve Bank of San Francisco, who studied how the CARES Act — which has added an extra $300 to weekly unemployment payments through September — is affecting people's willingness to accept job offers.

Many economists argue that unemployment stimulus is getting an outsized portion of the blame for hiring difficulties, mainly from Republican governors who have moved to end or limit supplemental income in their states.

Valletta’s research found that unemployment benefits alone aren't keeping people from working. It identified challenges to working born out of the pandemic, including child-care and safety concerns, as primary hurdles.

The added unemployment benefits have the biggest effect for the lowest-wage workers, since a higher percentage of their paychecks come from this supplement. Those out of work often see their weekly unemployment income double with the pandemic stipend.

Despite the boost in income, these payments don't appear to be deterring low-wage workers from applying to jobs. Data show those benefiting the most from unemployment insurance are returning to work more than anyone else. Shierholz said that over the last two months, 75% of the jobs added nationwide were in leisure and hospitality, by far the lowest-wage sector.

Still, there are jobs that need to be filled and to do so, some employers are deploying incentives rarely seen for low-wage jobs, including higher hourly rates and signing bonuses. The extreme competition to hire is unfamiliar to employers, who typically have the upper hand.

Companies nationwide have made moves to attract and retain workers. In May, Chipotle announced plans to raise hourly wages to an average of $15 by the end of June. The fast-casual chain is also offering its employees referral bonuses.

Soon after, McDonald's said it would raise the hourly wage of its restaurant employees by an average of 10%. Southwest Airlines, Walmart and Costco are among other companies that recently pledged to lift their minimum wages to at least $15.

That has left mom-and-pop businesses, without the deep pockets of big corporations, at a severe disadvantage in the hiring game.

“It's certainly impacting the entire economy more generally, but specifically for small firms,” said Holly Wade, the executive director of the National Federation of Independent Business.

Small businesses are experiencing unemployment at record highs. Forty-eight percent of small businesses surveyed by the group have an open position they’re unable to fill, according to a May report. “We're far beyond the average tight labor market, and it's only getting worse,” Wade said.

Jobs will become more scarce as the dust from the pandemic settles and positions are filled, ramping up the competition for employment to more familiar levels. At the same time, low-wage workers’ bargaining power may fade.

Negotiating a wage increase at higher-paying jobs where workers typically stay long term can make more of a difference than in leisure and hospitality jobs, which see higher turnover.

Those workers leave jobs after an average of 2.3 years, compared with a median across all industries of 4.1 years, according to the Bureau of Labor Statistics. As a result, an employee signing on above minimum wage might not be a lasting win for higher pay across the field, or even at a single establishment, economists said.

“Because we're in this period of great flux, there may be little pockets here and there of workers having more leverage, but I absolutely do not see any fundamental shift,” Shierholz said.

Ed Fraigun, owner of a Burgerim franchise in Lancaster, traces his hiring troubles back to March 2020.

Before that, he would post a job opening on jobs website Indeed or Craigslist and get between 20 and 30 applications, invite half of them in, and pick the best candidate with relevant experience to hire. These days, applications are few. Some applicants don’t show up for interviews. 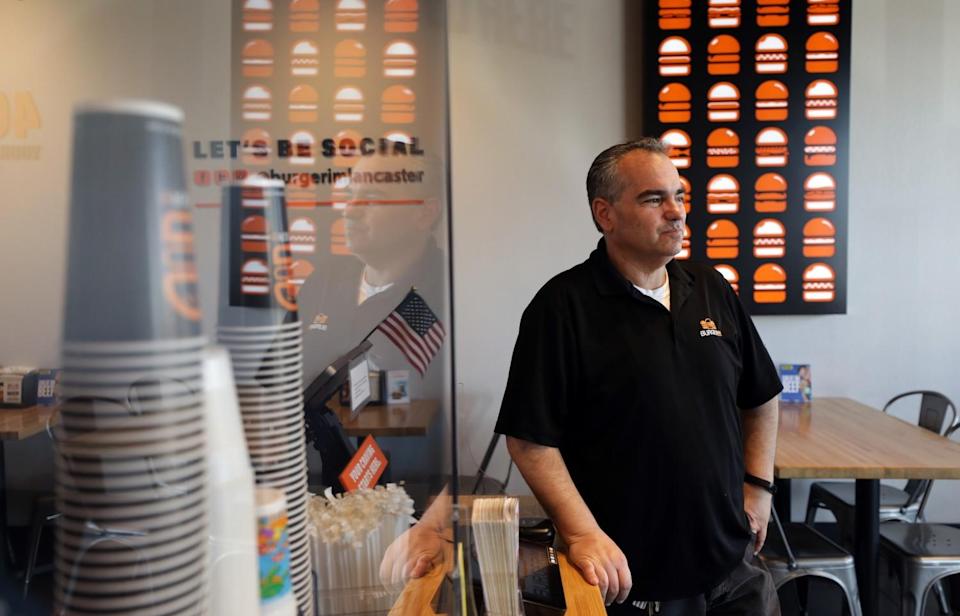 Ed Fraigun, owner of a Burgerim franchise in Lancaster, spent his birthday flipping burgers — one of many roles business owners are stepping into to fill as they scramble to hire. (Myung J. Chun / Los Angeles Times)

The burger joint is short one cashier and a few cooks. “I’m here seven days a week,” Fraigun said on a recent Wednesday. “It’s my birthday and I’m cooking burgers.”

Workers typically accept the first jobs they’re offered, according to Allegretto, the economist. That’s not the case right now as a flood of jobs come online all at once after California’s June 15 reopening. Those on unemployment income have the financial cushion to search for a job they want, and even people who aren’t receiving benefits still have more jobs from which to choose.

Last week, Fraigun hired a cook with no cooking experience. Of the handful of applicants for the job, Fraigun said, two didn’t want to be cooks, one didn’t show up for the interview, and one took a job in retail instead.

“Right now, I'll take anybody who seems like they could handle the pressure of the job as a cook, and I'll teach them how to be a cook,” Fraigun said. Especially for small businesses, it’s more important to have a reliable worker on staff than no one at all, owners and managers said.

Richardson, the gym owner, said she has noted what seems like a pickier pool of applicants. When someone comes in for an interview, they have more questions about the job and often seem lukewarm. Before, she found that most interviewees seemed excited to simply be in the room for a competitive position at the boutique gym.

Ginny Silver, a business coach and YouTuber who makes videos helping Californians navigate the process of unemployment insurance, said most of her viewers “express that they genuinely want to return to work.” She said low-paying jobs are holding them back, with many saying "their work searches are not yielding job opportunities which would allow them to cover their cost of living."

Economists note this isn’t simply a recession. Other factors are affecting people’s willingness to work.

Child care has thrown the workforce into a tailspin at all income levels. Since March 2020, millions, most of them women, have left their jobs to cope with child-care and other family demands.

Pandemic layoffs have pushed some workers to get out of underpaying jobs, while unemployment benefits offered them flexibility to do so.

“I think it was a big eye-opener for us,” said Luis Herrera, who worked in food service for more than a decade and was laid off in March 2020. Co-workers in the service industry, often mistreated and underpaid, felt that “enough is enough.”

Before the pandemic, Herrera said, he felt stuck in his job — with no overtime, no vacation, no health insurance — forever. In his time without work, he collected unemployment and completed his high school diploma online. Three months later, he got a job as a filing clerk at a community health nonprofit in Los Angeles, a position for which he was newly qualified.

Hererra has since been promoted to a community manager, making double the salary he made at the restaurant. He also has health insurance, holidays and vacation days: “My life changed completely after I got hired here.”

Life is looking different all around as businesses transition out of the pandemic.

Jarvis Young, who owns a Papa John’s in Los Angeles with his wife, is struggling to staff up at all levels, from managers to delivery drivers. He employs 16 workers and said he needs closer to 23.

He has started borrowing employees from other Papa John’s franchises to keep up with demand. Until they hire one, his wife is acting as the general manager. The two of them sometimes deliver pizzas — not quite what they envisioned for themselves as franchise owners. “At the end of the day, this is our business," he said.