No sooner had Richard Branson touched down on earth following his historic trip into space, shares of Virgin Galactic (SPCE) began dropping like meteors. In last week’s trading, the stock crashed by 38%.

SPCE shares are known for their volatility, and you can put the selloff down to a classic case of “buy the rumor, sell the news.” However, the company’s post-flight decision to sell as much as $500 million in stock whenever the need arises, did not help matters either, sending investors to the exit gates faster that you can say “lift off,” – or in this case – “sell off.”

One Street analyst non-plussed about the drop is Cowen’s Oliver Chen. In fact, Chen thinks the stock sell will drive “attractive liquidity.” The analyst also has a long list of catalysts to explain why the current valuation level is a “buying opportunity.”

“The second test flight sets the stage to build excitement for reopening of ticket sales and allow SPCE to ramp up its commercial spaceflight program,” the 5-star analyst said. “Key catalysts/milestones we are monitoring from here include: (1) third and fourth test flights this summer, which should mirror the second test flight, (2) the timing of the next ticket sales, which should translate to cash inflows, (3) consumer demand for ticket sales and the price of each ticket, which is expected to be substantially higher than the original price of $250k, and (4) the timing of the first commercial spaceflight.”

SPCE’ long-term goal remains the generation of $1 billion of revenue “per spaceport.” This is based on roughly 400 commercial space flights each year with an HSD (high single-digit) to LDD (low double-digit) number of spaceships.

Chen estimates the figure assumes tickets conservatively priced in the $275,000 to $300,000 range, resulting in flight generated revenue of almost $700 million. Per the $1 billion outlook, Chen thinks the other $300 million is based on revenue from “ancillary services.”

Down to the nitty gritty, then, what does it all mean for investors? Chen reiterated an Outperform (i.e. Buy) rating for the shares, along with a $51 price target. Investors are looking at strong upside of ~61% from current levels. (To watch Chen’s track record, click here)

The consensus breakdown shows this name elicits a variety of opinions from Wall Street analysts; SPCE boasts a Moderate Buy consensus rating, based on 4 Buys, 6 Holds and 1 Sell. The shares are priced at $31.12, and their average target is $36.90, implying an 18.5% upside potential for the next 12 months. (See SPCE stock analysis on TipRanks) 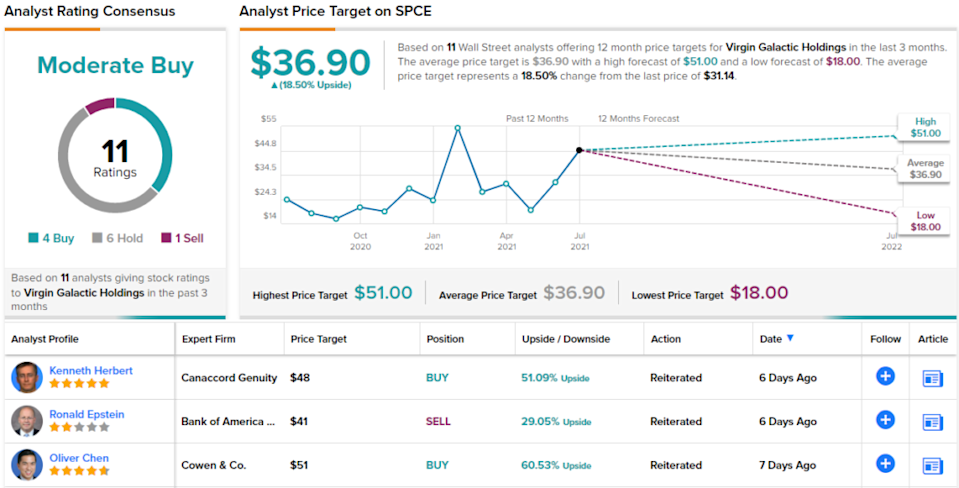