The Oil Trade is Crushing

There’s lots happening in the news this week beyond yesterday’s Federal Reserve meeting. So, today, let’s bounce around to several stories affecting your portfolio.

As we’ve been tracking here in the Digest, copper and other base/industrial metals have been on a tear for months – until recently…

Below, you can see copper climbing more than 85% over the last year, before giving back some gains beginning in May. The metal is down 8% from its recent high about one month ago. 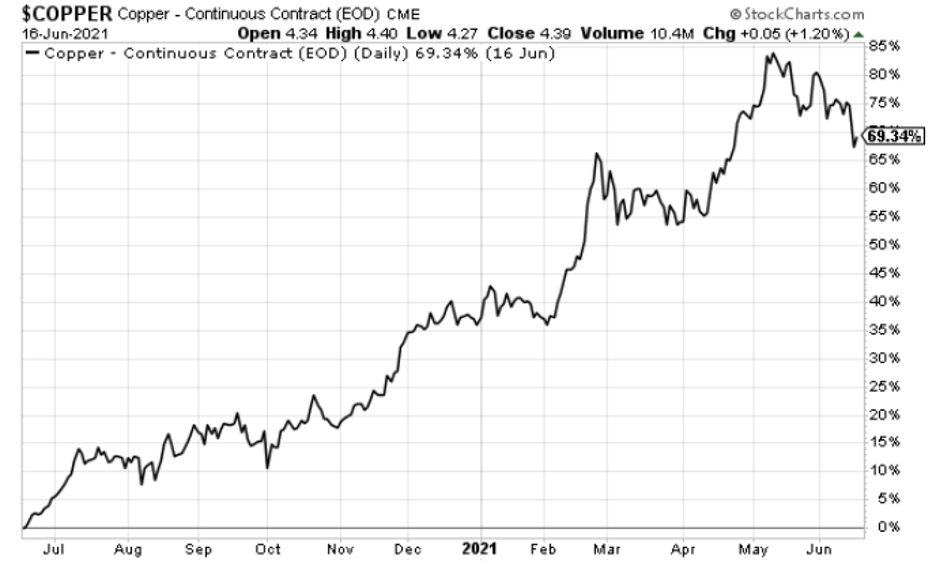 From the Wall Street Journal:

China said it would begin to sell major industrial metals from state stockpiles, an effort to squelch factory-gate price increases that have hit a 13-year high and are stoking fears of global inflation.

As the world’s biggest buyer of a range of industrial commodities, China is using its market heft to try to quell the sharp rise in global metal prices over the past 12 months, including a 67% surge in copper, a bellwether for macroeconomic health.

Regular Digest readers know that we’re highly bullish on copper and other base metals. In reaching this conclusion, we’ve relied on analysis from our macro specialist, Eric Fry, that’s pointing toward a multi-year supercycle in key commodities.

Does this news out of China change any of that?

China might be able to temporarily take pressure off of soaring commodities prices, but – to borrow from the Fed – that would be “transitory” …a bit like trying to block the spray from a firehose with your hand.

As the world transitions to green energy over the coming years, the demand for copper and base metals is going to be massive. One country’s reserves – even a country as large as China – can’t stop that.

From The Verge (bold added):

Something does not come from nothing. That fact can be easily forgotten when it comes to seemingly abstract concepts like “energy.”

As the climate change crisis worsens, more politicians are starting to underscore the importance of transitioning to clean energy.

In some cases (like silicon for solar panels), higher demand is unlikely to be an issue…

But our supply chains for other materials — like neodymium for wind turbines, lithium and cobalt for batteries, and copper for basically everything — may need to shift.

And from Axios (bold added):

The global need for copper could increase by an estimated 350% by 2050, with current reserves depleting sometime between 2035 and 2045, as wind and solar energy generate an increasing percentage of electricity and more people adopt electric vehicles.

Now, to adjust expectations, copper’s price is under pressure. Below, we add a 50-day simple moving average to its one-year chart.

As you can see, it has just fallen below this support line. If it doesn’t bounce back quickly, we should expect further price-weakness in the coming days. 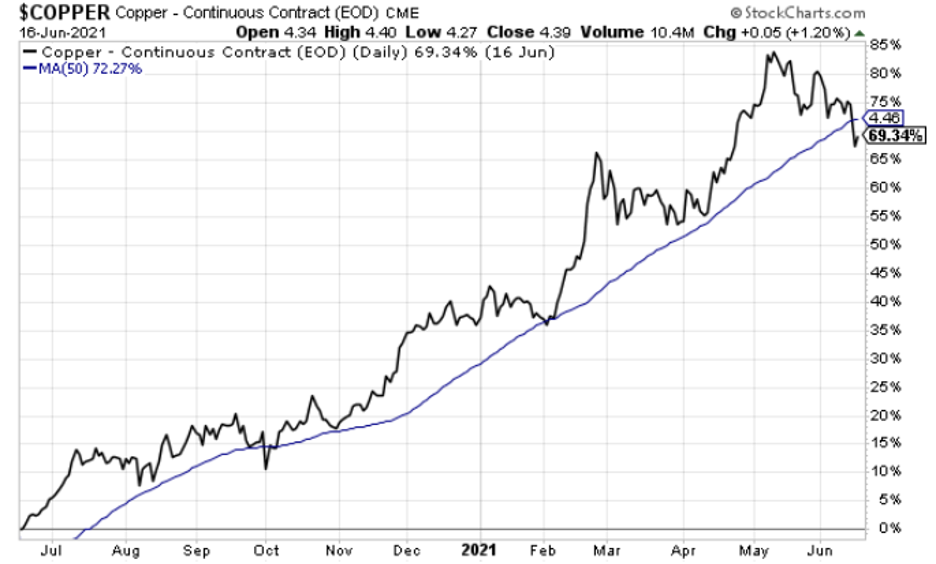 But if that happens, we would view it as an opportunity to add this “green” commodity to your portfolio as a long-term investment.

By the way, if you missed it, click here to read our recent Digest featuring Eric’s thoughts on vanadium and how you might play it. He believes it’s the next base metal to offer investors huge returns.

Copper and base metals play a huge role in the batteries of electric and autonomous vehicles.

Interestingly, yesterday, we learned that GM will increase spending on electric and autonomous vehicles to $35 billion through 2025. That’s a 30% increase from plans announced toward the end of just last year.

The additional money will be used to expand its rollout of EVs and accelerate production of its battery and fuel cell technologies, including two new U.S. battery plants in addition to two under construction, by 2025.

Keep in mind, yesterday’s news comes less than one month after Ford announced it is increasing its electric vehicle spending to more than 30 billion by 2025.

And speaking of spending, we’ve also learned that Alphabet’s self-driving affiliate, Waymo, just raised another $2.5 billion. This money will be put toward its continued efforts to develop autonomous-driving technology for passenger cars and freight hauling.

From the Wall Street Journal:

The company on Wednesday said it wants to use Waymo Driver technology to move people and goods. Its autonomous ride-hailing service, Waymo One, has had thousands of trips in metro Phoenix where some customers are shuttled around in minivans without a person behind the wheel, Waymo said. Waymo is conducting tests of its autonomous vehicle technology with riders in San Francisco.

For its Waymo Via delivery unit, the company said it has joined with J.B. Hunt Transport Services Inc. to move freight across the country. Its clients on a local level include United Parcel Service Inc. and AutoNation Inc.

Here too, Eric has positioned his Investment Report subscribers to benefit from this EV/AV megatrend. His EV-related pick back in February is up 60% as I write. But signs suggest there are much bigger gains to come.

***Green is the future, but right now “black” is making lots of money

We’re talking about the oil trade.

Below, you can see the price of West Texas crude soaring over the last 12 months, topping $72. 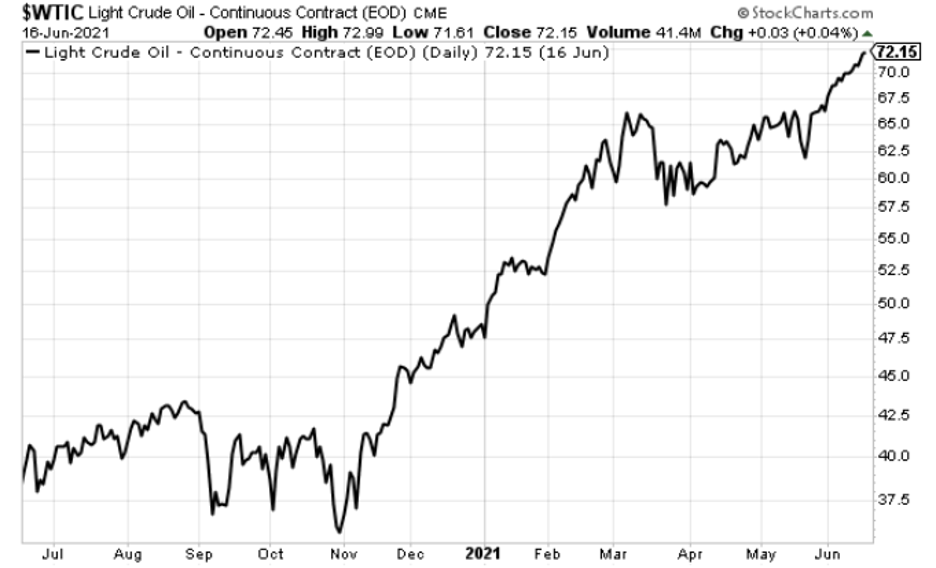 In our February 19th Digest, we noted that, long-term, our world is moving away from oil, toward renewable energy.

We highlighted a series of facts and statistics supporting this conclusion, one of which was the Biden administration’s plans to make the U.S. a 100% clean energy economy with net-zero emissions by 2050.

But as we wrote in that Digest…

There’s a lot of time between now and 2050 for a profitable oil trade.

The second was Diamondback Energy (FANG), which is a Texas-based energy exploration company…

And the third was Exxon (XOM), the massive multinational oil and gas company.

It’s been four months since that suggestion, so where do things stand as I write? 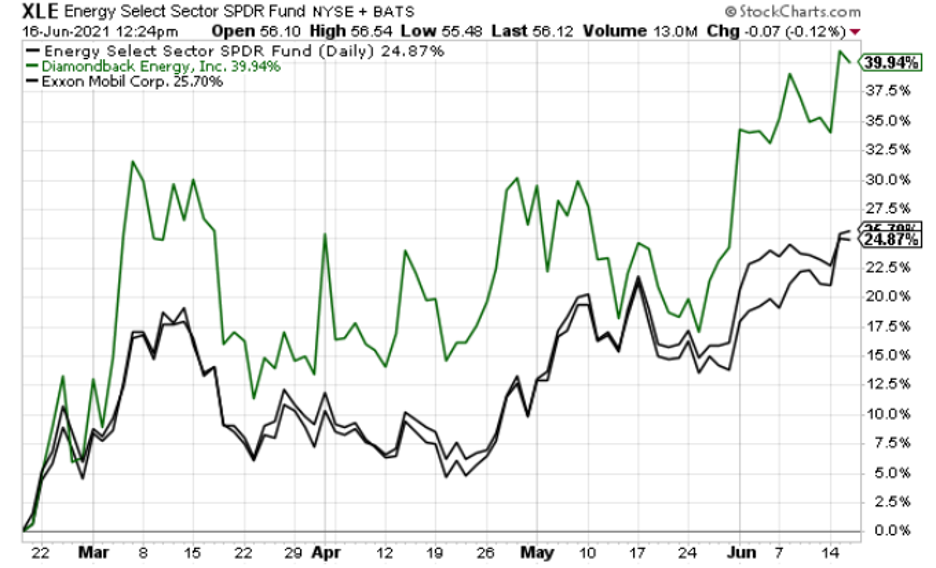 Oil is piggybacking on the economic reopening as life has been getting back to normal, leading to higher demand.

Meanwhile, supply has been constrained as production has been slower to get back online after 2020-shutdowns.

We believe this trade has more legs as the supply/demand imbalance works itself out. Plus, if we continue seeing higher inflation numbers, that’ll be an additional tailwind.

But see this trade for what it is – it’s a short-to-medium term momentum trade. We still believe electric will be the big winner of the decade, not oil. So, as it’s been said, “rent this trade, don’t buy it.”

That said, this rental is treating us quite well, so let’s stay with it for now.

We’ll keep you updated on copper, EVs, and oil here in the Digest.

The post The Oil Trade is Crushing appeared first on InvestorPlace.