The economy needs millions of workers. So why can’t college grads find jobs? 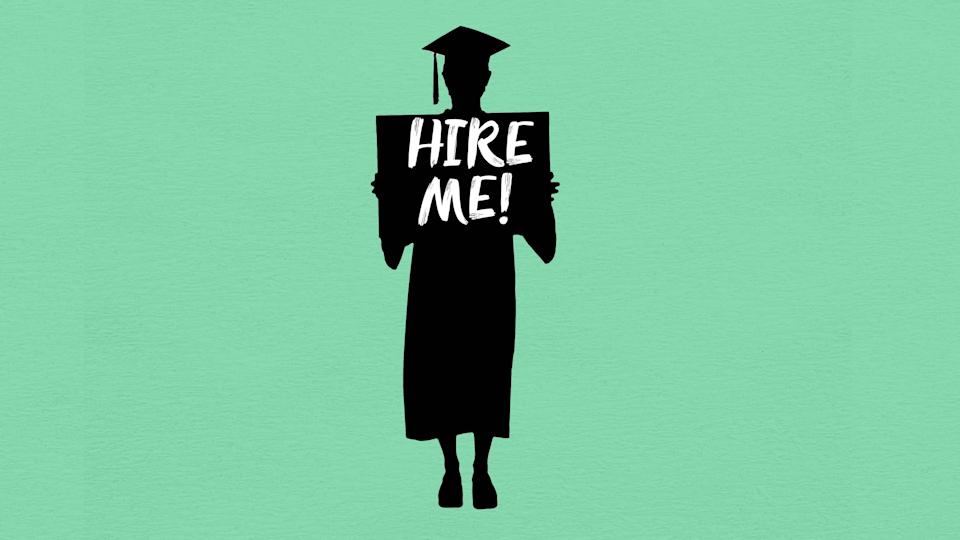 College students who graduated in May are struggling to find jobs, in part because they’re competing with both 2020 grads who deferred their job searches during the pandemic and the millions of Americans laid off in the health crisis, experts say.

After more than a year of virtual classes and the loss of an on-campus, rite-of-passage experience, millions of newly minted college graduates need jobs.

U.S. businesses, coping with the direst labor shortages on record, need workers. Millions of them.

It would seem like a match tailored for a post-COVID-19 recovery that’s riding a historic surge in demand but remains constrained by a dearth of employees.

Except it’s not quite working out that way.

College students who graduated in May are struggling to find jobs, in part because they’re competing with both 2020 grads who deferred their job searches during the pandemic and the millions of Americans laid off in the health crisis, experts say. Although employers are scrambling to fill a record number of job openings, many are lower-wage positions that college grads aren’t seeking.

Other higher-skill, white-collar openings are also going begging but chiefly in certain industries, like technology and health care, college and staffing officials say.

“The job market for the class of 2021 is improving but remains unusually difficult,” says Kevin Harrington, CEO of Joblist, which provides online tools to job seekers.

More than half of college seniors and recent graduates – 55.6% – described their career outlook as pessimistic, according to a Joblist survey of about 1,000 recent and soon-to-be grads in February and March. The vast majority were looking for entry-level positions, and 3 out of 4 said they were struggling to find them.

As a result, 54% decided to pursue more schooling until the job market improved while 25% switched industries. About 80% of those polled were scheduled to graduate this year.

An updated survey of 157 respondents that Joblist conducted for USA TODAY over the past week yielded similar results. About 47% of respondents had a bleak view of their career prospects compared with 31.2% who were optimistic. And 72.4% struggled to find the kind of entry-level positions sought by college grads.

It’s no wonder college students and new grads feel frustrated. After hovering below pre-pandemic levels as recently as May, the number of applicants per entry-level job opening jumped by 44% in June and is now 34% above its pre-crisis mark, according to ZipRecruiter, a leading job site.

With millions of students graduating in May, “Everyone is inundated with applications,” says Julia Pollak, chief economist with ZipRecruiter, an online marketplace for jobs.

McKenzie Galbreath began her job search in December and has continued it since graduating from the University of Florida in May with a degree in psychology. With job postings in her field few and far between, she has applied for just five positions and gotten two interviews as she seeks a counseling position at a drug and alcohol rehabilitation center.

“The job hunt has been tough because I feel like positions are scarce,” Galbreath, who lives in Tallahassee, Florida, wrote in an email interview. “I noticed … that I was up against 2020 grads, too, who were still on the job hunt because of COVID. It was a bit intimidating to know that so many people are applying for the same positions.”

To be sure, lots of jobs are available. A record 48% of small businesses said they had openings they couldn’t fill in May, according to the most recent survey by the National Federation of Independent Business. And there were 9.2 million job openings across the nation in May, the most ever, Labor Department figures show.

Increasing COVID-19 vaccinations and the reopening economy have turbocharged consumer demand. But some workers have decided to stay on enhanced unemployment benefits while others are still caring for kids or sick relatives, economists have said.

The most severe shortages are in leisure and hospitality, which includes restaurants, bars and hotels that are roaring back now that most states have lifted capacity limits and Americans are traveling again. College grads generally aren’t seeking jobs as servers or front-desk clerks but some are eyeing managerial positions in those sectors, says Lakeisha Mathews, director of the Career and Internship Center at the University of Baltimore and incoming president of the National Career Development Association.

With many laid-off workers still sidelined, graduates should have a leg up in the competition for those jobs, she says. But they may want to act quickly. About half the states have already cut off the $300 federal bonus in jobless benefits, along with other pandemic-related aid. By September, that assistance will end across the country and most schools will reopen, prodding former managers of restaurants, hotels, theme parks and other entertainment venues to resume their job hunts.

“There are still a lot of unemployed people and it’s going to get competitive really soon,” says Andrew Challenger, senior vice president at Challenger, Gray & Christmas, an outplacement firm.

There are plenty of other jobs for people with degrees. Job openings in professional and business services hit a record 1.5 million in April, up from 1.3 million before the pandemic. But such positions are skewed toward high-skill fields such as information technology, engineering and health care, say Mathews, Pollak and Joshua Kahn, assistant director of research and public policy for the National Association of Colleges and Employers (NACE).

In industries such as marketing, public relations and social services, many companies cut entry-level jobs during the crisis and have been slow to bring them back, Pollak says.

“Everybody has gotten used to getting by without their people,” she says. “Businesses have become more efficient.”

In March, employers projected hiring 7.2% more new college grads from the class of 2021 than they brought on from the class 2020 but that would still leave such hiring below pre-pandemic levels, according to NACE and Kahn.

At the same time, 2021 college grads are vying for positions with their 2020 predecessors, many of whom put off their job searches during the pandemic, as well as people laid off amid the pandemic, Kahn and Challenger say. Forty-five percent of graduates from the class of 2020 were still looking for work in March 2021, according to a survey that month by job site Monster.com.

And although the U.S. has recovered 15.6 million of the 22.4 million jobs lost in the early days of the pandemic, that still leaves about 6.8 million Americans out of work because of the crisis, though some have retired. Some of the unemployed have a few more years of experience in the kind of entry-level positions grads are seeking.

College grads traditionally have held a big advantage over older workers: They typically don’t have families and some are willing to relocate to other regions of the country for a job. But that edge has been somewhat blunted by the remote work trend sparked by the pandemic that has many companies willing to hire candidates who can work from their current homes halfway across the country, Challenger says.

With competition fierce, Galbraith, the University of Florida graduate seeking a counseling job, has switched up her strategy from scouring online postings to “more networking and building relationships with people.”

“That has helped me learn of new opportunities I wasn’t aware of, and it’s also made me more knowledgeable of the type of position I want to pursue,” she says.

Still, she’s thinking of going back to school to earn a master’s degree to improve her chances and boost her starting salary.

Alexia Brown, another 2021 University of Florida grad who majored in psychology, has been seeking a job as a university laboratory assistant to help her decide whether to pursue research, become a psychotherapist or teach. But she says there are few entry-level positions available because the pandemic led to a decrease in federal funding.

She’s also competing with unemployed research assistants who have two or three years of experience.

“It’s very challenging knowing what I want to do, seeing the opportunities there and just not being able to get my foot in the door,” Brown says. “It is a little frustrating.”