The Data Shows That Bitcoin Is Ready for Higher Prices

It’s no secret that the price action in Bitcoin (CCC:BTC-USD) hasn’t been great in recent months. 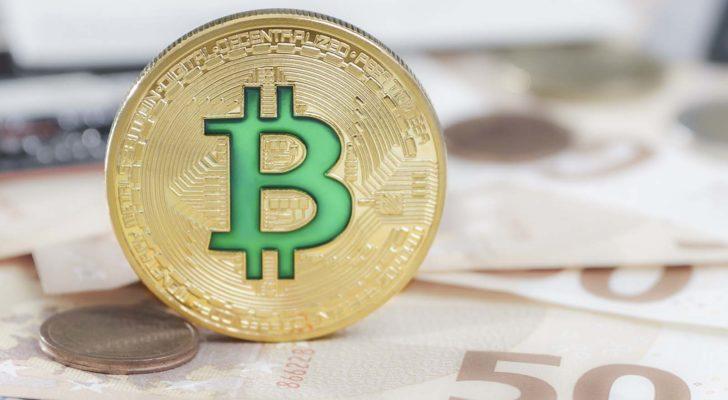 The industry bellwether and world’s largest cryptocurrency is down about 50% from its April 14 peak above $64,000. That’s a pretty steep decline…

But it’s also no secret that the cryptocurrency market is incredibly volatile.

Volatility is tough for a lot of investors. Nobody likes watching their investments underperform and even stagnate at times. Emotions take over and push logical thinking to the backburner. And that’s when bad decisions are made…

And you must be able to stay focused on the big picture.

When it comes to the cryptocurrency market, that big picture is incredibly promising…

Bitcoin has spent the last seven weeks trading in a range between $31,500 and $40,500. It fell below its 20-week simple moving average on May 15, and lesser-known altcoins broke down even harder.

History shows that when Bitcoin is below its 20-week SMA, altcoins have a difficult time trending higher let alone breaking out to new highs.

That’s where we are today. But despite what the financial media pundits might be saying, there are absolutely no signs of a bear market on the horizon.

In fact, we are seeing signs of just the opposite…

The Bitcoin network is still growing. More than 34,000 new entities are coming into Bitcoin every day, which is a very positive trend and lends credibility to the idea that the downward action since April is nothing but a garden variety correction.

Not a new bear market.

Glassnode uses mathematical models to identify entities on the blockchain, and the chart below shows the strong growth we’ve been seeing recently. 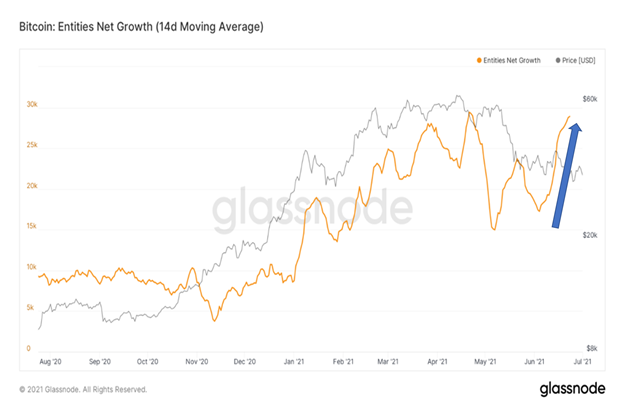 The whales are buying. Bitcoin “whales” — entities that hold 1,000 or more Bitcoins — are fundamentally important to the crypto market because they have a lot of firepower to move it one way or the other.

Current data indicates that these whales have stopped selling and are in fact adding to their positions — even with the less-than-impressive performance. That means they view the current weakness as a buying opportunity … and expect the price action to trend upward again.

Bitcoin is moving off the exchanges. Experienced crypto investors do not typically leave their cryptocurrencies on centralized exchanges. It counteracts one of cryptos’ greatest principles. Instead, many investors take custody of their coins and hold them in safer options, like offline wallets.

The latter is what we’re seeing today. More than 31,000 Bitcoins left exchanges in just one day this week. That’s a bullish sign.

The Puell Multiple is flashing a buy signal. Miners are the backbone of the Bitcoin network, and their behavior can oftentimes tell us a lot about where the market is heading.

That’s where the “Puell Multiple” comes in. It looks at Bitcoin supply by miners and their revenue and is calculated by dividing the daily issuance value of Bitcoins by the 365-day moving average of daily issuance value. This provides potential buy and sell zones based on historical data.

The green shaded box in the chart below shows periods when the daily issuance value was extremely low. When the Puell Multiple (the orange line) dips to this level, it has historically represented a fantastic buying opportunity for smart investors. The black line is Bitcoin’s price, and you can see that investors who bought during these periods and held for the long term were rewarded with massive and potentially life-changing returns. 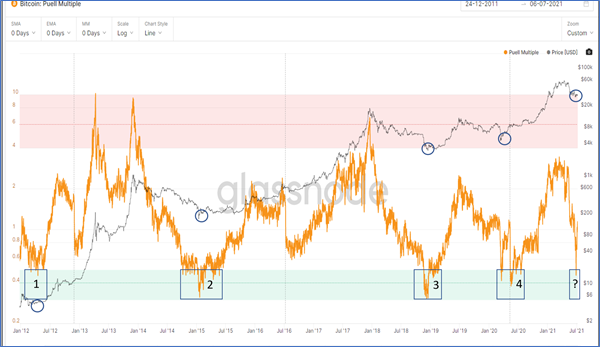 Well, it looks like the Puell Multiple is dropping into the green box again. And if Bitcoin is preparing for its next leg higher, you can bet that select altcoins are ready to soar as well.

The crypto awakening that we’ve been talking about for months isn’t just alive and well … it’s already underway.

Bitcoin, altcoins and the blockchain technology they run on will change so much about our lives. From the big stuff like buying a home or paying your taxes to how your pay for a pizza and everyday goods and services.

As the world realizes that these changes are coming, it will drive the price of Bitcoin — and the strongest altcoins — to never-before-seen heights.

I still believe this will happen.

We may have to be patient as Bitcoin and altcoins chop around in the near term. But if Bitcoin makes its way to 100K in the next 12 months as I expect it will … select altcoins should multiply even more.

The post The Data Shows That Bitcoin Is Ready for Higher Prices appeared first on InvestorPlace.