Stocks post record run under Biden. Here’s what could happen next.

President Joe Biden has seen historic growth in stocks since winning the election, with markets outperforming the gains of his predecessors going back to Harry Truman.

Since Election Day, the S&P 500 has climbed 26% through Friday, making it the best 220-day stretch for stocks after a presidential election since World War II, according to investment research firm CFRA.

The only administration going back to World War II to come close to Biden’s gains was that of John F. Kennedy, who saw an 18.3% rise in the same time span.

The "Biden boom" is thanks to a recovering economy and massive stimulus from Washington and the Federal Reserve, factors that were underway before Biden took office. That’s continued to help propel the stock market. Another big stimulus package this spring, the COVID-19 vaccine rollout and an infrastructure plan under the Biden administration have also added to investor optimism, analysts say.

Will the stock market take a breather?: Here’s what the second half of 2021 could look like for your retirement investments

To be sure, presidents don't have much influence on the stock market. Still, the recent gains typically bode well for Wall Street for the rest of the year, financial experts say. 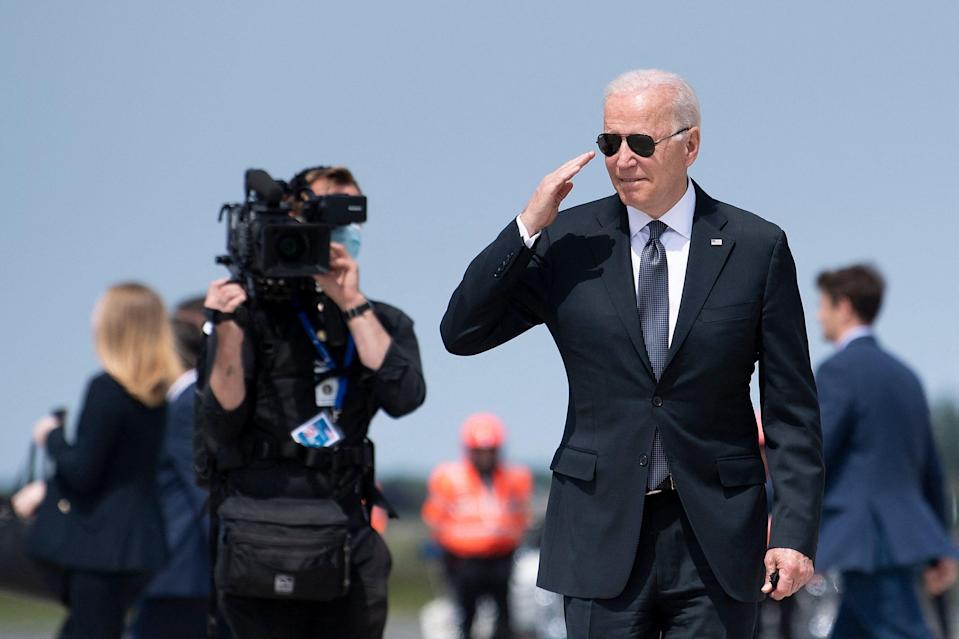 President Joe Biden has seen historic growth on Wall Street since being elected, better than any of his predecessors going back to Harry Truman.

“Usually if you start the year off strong in the stock market, the question then becomes whether all of the good stuff is behind us? And the answer is we still have something to look forward to,” says Sam Stovall, chief investment strategist at CFRA. “It likely won’t be as good as the first half, but I’ll take it.”

Historically, the last six months of the first year of a new president’s term is characterized by steady gains. Since 1945, the S&P 500 has posted an average gain of 5.1% in that span and has been positive 68% of the time over that stretch, data from CFRA shows.

After one of the best starts to a bull market in history, the recent record rally is showing signs of fatigue. While the S&P 500 has surged more than 80% since hitting a low in March 2020, additional stock gains in the second half of 2021 are likely to be more modest, according to market forecasters.

The second year of a bull market tends to be choppier, with positive but moderating returns and periodic pullbacks.

In the second half of the year, however, as inflationary pressures build, interest rates potentially rise further and this bull market gets a little older, the pace of stock market gains will likely slow and come with more volatility, Buchbinder added.

“It’s going to get tough for (Biden) going forward,” says Megan Horneman, director of portfolio strategy at Verdence Capital Advisors. “There are still issues with the economy, whether it’s a supply crunch, inflation or a labor-market shortage.”

Still, as the economy recovers and more Americans are vaccinated, this bull market has more room to run and could further add to the value of Americans' 401(k) plans.

Stocks have historically risen 85% of the time on a one-year basis during expansionary periods. And going back to 1957, the average bull market in the S&P 500 has lasted 5.8 years, according to Truist Wealth, a wealth management firm.

The S&P 500 has advanced 13% so far this year. That’s above the historical average of 10.5% going back the past half century, according to Terry Sandven, chief equity strategist at U.S. Bank Wealth Management in Minneapolis, Minnesota.

The primary risks investors will monitor in the second half of the year include rising inflation, possible interest-rate hikes, higher corporate taxes and the potential for further infections of COVID-19 outside the U.S.

On Wednesday, investors turn their attention to the Federal Reserve, when the central bank will wrap up its latest policy meeting.

The Fed is widely expected not to raise interest rates in response to higher inflation this month. But investors will be looking for clues to see if policymakers are concerned about recent data that’s shown a sharp rise in prices.

“Inflation is looming just as a massive stimulus is in motion,” says Sandven. “The concern is that higher inflation may cause a response from the Fed to lift rates to prevent the economy from overheating.”

Another issue economists are monitoring is worker shortages, which are slowing the recovery. Generous unemployment benefits and people caring for kids and sick relatives are often cited for the lack of job candidates. Others argue that companies are struggling to find workers because Americans have started their own businesses.

“The biggest decision Biden will make is what to do with the extended unemployment benefits," which expire in September, say Horneman. "He may be forced to go against some politicians in his party. “ This is a big economic decision that could be one of the biggest tests of his presidency.”

Don't fear the next market drop

With an improving economy, massive stimulus and rising vaccination rates, any potential dips in the stock market will offer investors buying opportunities to snatch up shares at cheaper prices, Buchbinder says.

Investors are shifting their money from growth stocks like technology companies, which thrived in a stay-at-home economy, to companies poised to benefit from the revived economy. That includes value stocks, which trade at low prices compared to their net worth.

But after a strong first-half for cyclical stocks like energy, financial and real estate-related companies, which perform well during periods of economic growth, a change in market leadership could come in the second half of the year, according to Sandven.

Companies that aren’t as sensitive to economic cycles are showing improvement and are positioned for a stronger performance in the second half, Sandven says. Those areas include technology and health care.

It will likely be tough for the broader stock market to trend meaningfully higher without greater participation from technology since it represents roughly 26% of the market capitalization of the S&P 500, analysts say.

The stock market hasn't seen a 5% decline since last fall, which is one of the longer streaks without one over the past decade, analysts say. Stock markets on average experience about three 5%-plus falls a year.

That makes the market more vulnerable in the near-term following some signs of investor complacency, analysts say. But Buchbinder doesn’t expect any pullbacks to last long.

Investors shouldn't make any quick or rash decisions with their retirement accounts when investing for the long-haul, experts caution.

“Don’t try to restructure your portfolio based on what you think will be the next risk, or else you’re going to be one step behind,” says Stovall. “Have a diversified portfolio and make tweaks and add to it whenever you can. Then leave it alone.”