Stocks struggled for direction Monday morning as investors weighed the prospects of higher inflation and rates in the U.S. against Friday's solid print on the U.S. labor market recovery.

The Dow was slightly higher, adding fewer than 50 points just after market open. The Nasdaq futures underperformed and traded slightly in the red. The S&P 500 was little changed, and the index hovered just below its record high.

On Sunday, U.S. Treasury Secretary Janet Yellen suggested higher interest rates "would actually be a plus for society's point of view and the Fed's point of view," according to an interview with Bloomberg. She added that President Joe Biden should push ahead with his sweeping multi-trillion-dollar infrastructure plan even if the elevated spending contributes to longer-lasting inflation and higher interest rates.

The statements appeared to solidify that at least some policymakers were comfortable with rising inflation and rates, even as investors have eyed these scenarios with increasing nervousness over their implications for equity prices.

"Inflation can become a headwind to valuations if it leads to expectations of Fed tightening and thus higher real interest rates," Goldman Sachs Strategist David Kostin wrote in a note Monday. "Overall, the stock market tends to perform better during periods of low inflation than when inflation is high."

"Within the market, periods of high inflation have corresponded with the outperformance of the Health Care, Energy, Real Estate, and the Consumer Staples sectors," he said. "Materials and Technology stocks have fared the worst in high inflation environments."

Still, a number of members of the Federal Reserve have reiterated that they believe the economy is still on the mend from the coronavirus pandemic, and thus that any tightening of their current, highly accommodative monetary policies remains a ways off. Friday's slightly weaker-than-expected May jobs report seemed to justify this stance, as it showed the economy was still adding back jobs at a pace that suggested a prolonged recovery back to pre-pandemic levels even given present monetary and fiscal support. Market participants also lowered their bets on a 2022 Federal Reserve rate hike following the jobs report, based on CME Group's Fed Funds Futures.

"Fed Funds Futures prices reflect a solid belief that the first Fed rate increase is not coming until 2023," Nicholas Colas, co-founder of DataTrek Research, wrote in a note Monday. "Given all the chatter about inflation, that’s pretty remarkable, but it certainly does provide useful color regarding the current strength in U.S. equity markets."

The three major indexes opened Monday's session little changed, with the Dow and S&P 500 opening slightly to the upside. The session looked poised to be one driven by the "reopening trade," with airline, cruise line and lodging company stocks moving upward while the tech shares lagged and pulled the Nasdaq slightly below the flat line.

Cyclical small cap stocks outperformed, with the Russell 2000 moving higher by 0.3%. Crude oil slipped to give back some of last week's gains, and Treasury yields moved slightly higher across the curve.

Here's where markets were trading ahead of the opening bell Monday morning: 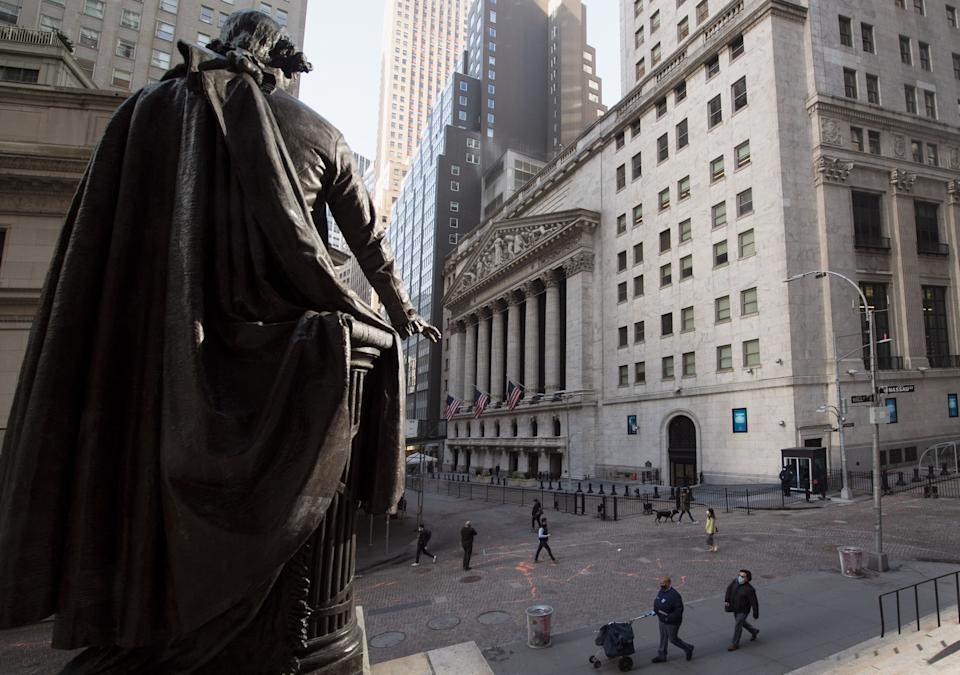 People walk past the New York Stock Exchange (NYSE) and a statue of George Washington at Wall Street on March 23, 2021 in New York City. – Wall Street stocks were under pressure early ahead of congressional testimony from Federal Reserve Chief Jerome Powell as US Treasury bond yields continued to retreat. (Photo by Angela Weiss / AFP) (Photo by ANGELA WEISS/AFP via Getty Images)