U.S. stock futures hugged the flat line Monday evening after a record-setting session, with the prospect of strong earnings results helping fuel a rise to all-time highs for the major equity indexes.

Each of the S&P 500, Dow and Nasdaq ended the session at record closing levels. The financial sector outperformed with big banks poised to be the first major companies out the gate to report second-quarter results, with JPMorgan Chase (JPM) and Goldman Sachs (GS) reports on deck Tuesday morning. Both stocks ended Monday's session higher, and they were among the top-performers in the Dow.

S&P 500 earnings in aggregate are expected to grow by 64% for the second quarter, which would mark the fastest increase since the fourth quarter of 2009, according to FactSet data. Bank earnings especially are expected to show strength, buoyed by a wave of reopenings during the April through June quarter and an equity market trading at all-time highs. The pace of growth for the second half of the year will be closely watched in company guidance, given the potential for a growth moderation after an initial reopening surge. And with input costs rising and labor scarcities still weighing on the economy, margins across industries will also be closely in focus.

"If this idea happens and inflation rises, that's actually a very good thing for your banks," Courtney Dominguez Payne Capital Management senior wealth advisor, told Yahoo Finance. "So I think that can be a really good way of playing this going forward, where you want to look at companies that are going to benefit from either interest rates rising or who have just some pricing power here, that they are able to raise their costs effectively for their consumers and continue to make that money going forward."

Investors are also poised to get an update on the inflation front in the Labor Department's consumer price index (CPI) Tuesday morning. The broadest measure of consumer prices is expected. to rise 0.5% in June versus May, slowing down slightly from May's 0.6% month-on-month increase. Excluding more volatile food and energy prices, consumer prices likely rose 0.4%, also slowing from May's 0.7% rise. However, over last year, the bounce off 2020's pandemic-depressed lows will still be starkly evident, with consumer prices expected to rise 4.0% for the biggest jump in nearly three decades. 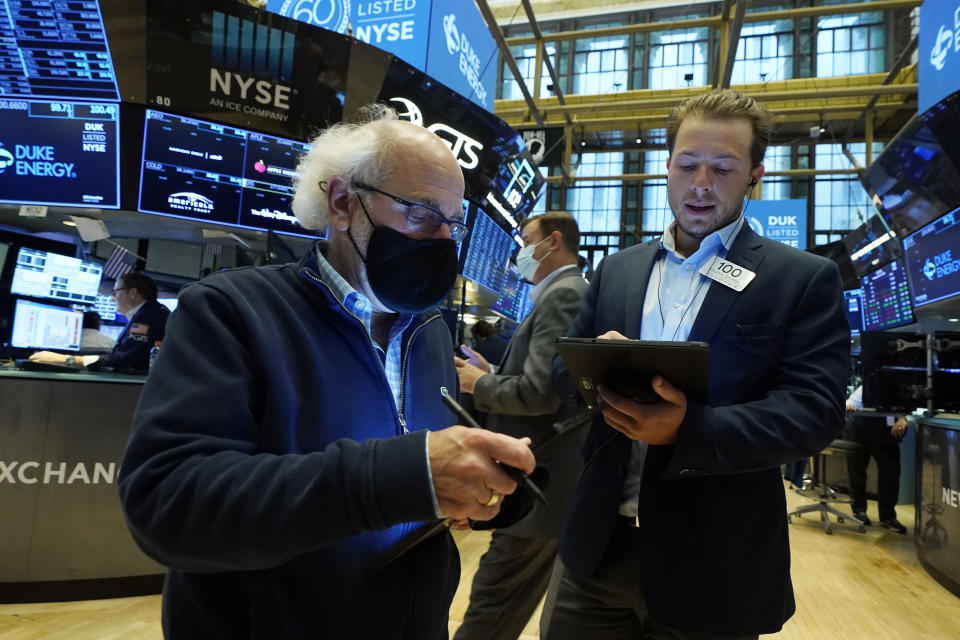 Trader Peter Tuchman, left, and Benjamin Tuchman, father and son, work on the floor of the New York Stock Exchange, Monday, July 12, 2021. Stocks are wobbling between small gains and losses in the early going on Wall Street Monday as investors look ahead to a wave of earnings reports from big U.S. companies coming out this week. (AP Photo/Richard Drew)