Shares of Dow-component Salesforce (CRM) gained after delivering a full-year profit forecast that topped Wall Street's expectations, underscoring continued expected strength in software spending even coming out of the pandemic. Shares of retailers Gap (GPS) and Ulta (ULTA) also gained in late trading after both companies posted first-quarter results that exceeded even lofty consensus expectations amid a pick-up in consumer spending.

Traders on Friday are set to receive a host of new economic data, including the Bureau of Economic Analysis' April report on personal income, spending and personal consumption expenditures. Personal income is expected to have dropped by 14.2% in April over March. This would come following a 21.1% surge during the prior month, which had been buoyed by the distribution of $1,400 stimulus checks to most Americans. Personal spending likely crept higher by 0.5%, moderating from March's stimulus-boosted 4.2% monthly gain.

Wall Street is also expecting to see that core personal consumption expenditures, or the Federal Reserve's preferred inflation gauge, rose by 3.5% in April over last year. The jump would be the largest since 2008, and is expected to mostly reflect so-called base effects as inflation bounces from last year's pandemic-depressed levels.

Heading into these reports, many of the key economic data reports this week have exceeded consensus estimates. New jobless claims fell more than expected to set a new pandemic-era low, Labor Department data on Thursday showed. And the Commerce Department's estimates-topping non-defense capital goods orders, excluding aircraft, for April suggested that business capital expenditures were picking up at a faster-than-expected clip.

Meanwhile, President Joe Biden is also expected on Friday to unveil a budget that would hike federal spending to $6 trillion for the coming fiscal year, the New York Times reported Thursday, with the increased spending also a source of further economic fuel.

Some strategists noted, however, that heading into the summer and second half of the year, investors may begin to see diminishing returns from expectations for a strong post-pandemic recovery, given that many signs of this rebound have already occurred and been priced into the market.

"I think one of the things that's happened over the course of the last couple of months is, you've had good economic data, yes, but expectations have caught up to that good economic data," Mike Hanson, Fisher Investments senior vice president of research, told Yahoo Finance. "The recovery in most places in the world – especially in the developed world, places like the United States – is mostly nearly done. There's still slack in the economy, but we've gone a good, long way. At some point, comparables for economic data are going to become difficult."

"You have this world where expectations have caught up and yet sentiment is also very high. To me what that says is, in the next six to 12 months, you're going to have to see a ratcheting down of expectations," he added. "When that happens it means cyclically, value stocks probably won't do quite as well as things like growth stocks, high quality."

But with investors still looking for signs of lasting inflation and potential overheating during the economic recovery, other strategists suggested traders should be prepared for some reactionary choppiness in the coming months.

“We’re seeing that rotational effect: growth to value, large-cap, small-cap,” Chad Oviatt, Huntington Private Bank director of investment management, told Yahoo Finance. “The relationships change day to day based on a lot of headline sensitivity it seems like, whether that's economic headlines or other headlines coming at us. And we think that’s probably a theme that continues for the rest of the year." 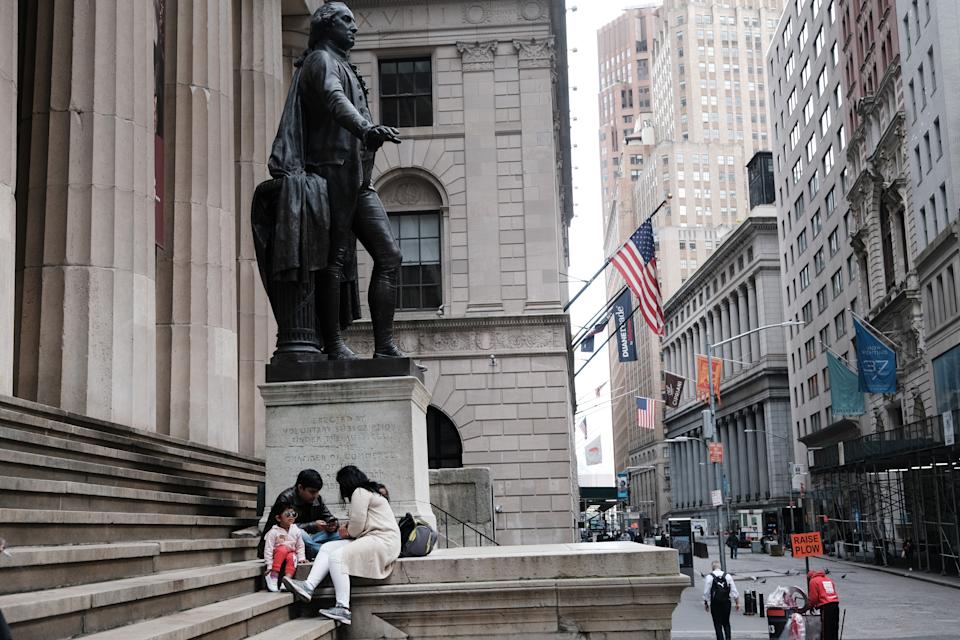 NEW YORK, NEW YORK – MAY 11: A family eats beside the New York Stock Exchange in lower Manhattan after global stocks fell as concerns mount that rising inflation will prompt central banks to tighten monetary policy on May 11, 2021 in New York City. By mid afternoon the tech-heavy Nasdaq Composite had lost 0.6% after falling 2.2% at its session low. (Photo by Spencer Platt/Getty Images)