Stock futures opened slightly higher Monday evening following a rally during the regular trading day, with technology stocks outperforming as concerns over rising inflation were at least temporarily pushed to the side.

Contracts on the S&P 500 ticked up after the index closed out the session higher by 1%. Contracts on the Nasdaq also rose after the index rallied 1.4%. The move higher in technology stocks came alongside a move lower in Treasury yields, with the yield on the benchmark 10-year note hovering just above 1.6%. Cryptocurrency prices largely held onto gains following last week's selloff, and Bitcoin prices (BTC-USD) rose 12% to more than $38,800 Monday evening in New York.

Though Monday's session offered an at least brief respite for investors after last week's equity selling, some strategists still struck a cautious tone on stocks, given the still-elevated concerns around inflation.

"Right now everyone knows they should be worried about inflation and inflationary pressures and what that could mean in terms of a monetary response, or also companies' profitability," Shawn Cruz, senior market strategist at TD Ameritrade, told Yahoo Finance on Monday. "If they decide to keep those rising input costs on their balance sheet, then great, we're not going to see inflation rise at least on the consumer side, but we might see margins come in when [second-quarter] earnings come out."

"I think the path of least resistance could still be higher, but I do expect this choppiness to remain somewhere around what we're seeing right now, just off of highs, at least until we get a little more clarity, maybe some indications that can help us inform expectations moving forward," he added.

Others also noted that the technology-led rally on Monday might prove short-lived.

"We don't think there's any problem with the fundamentals in the tech space … but we think it's been an over-owned, overvalued part of the market, and it's just the wrong macro backdrop for this part of the market at this moment in time," Lori Calvasina, chief equity strategist for RBC Capital Markets, told Yahoo Finance. "And so bottom line we still think inflationary pressures are here, and tech is one of the biggest sources of funding for rotation back into reflationing plays, things like financials, energy and materials," Calvasina said. "And we don't think those inflation pressures are going to abate any time soon."

However, at least some members of the Federal Open Market Committee suggested market participants may not need to worry that rising price pressures will catalyze a near-term move in monetary policy in the near-term. St. Louis Fed President James Bullard told Yahoo Finance on Monday that he believed increases in inflation would be "mostly temporary," and that the Fed was "not quite there yet" when it came to discussing tapering its asset purchases. 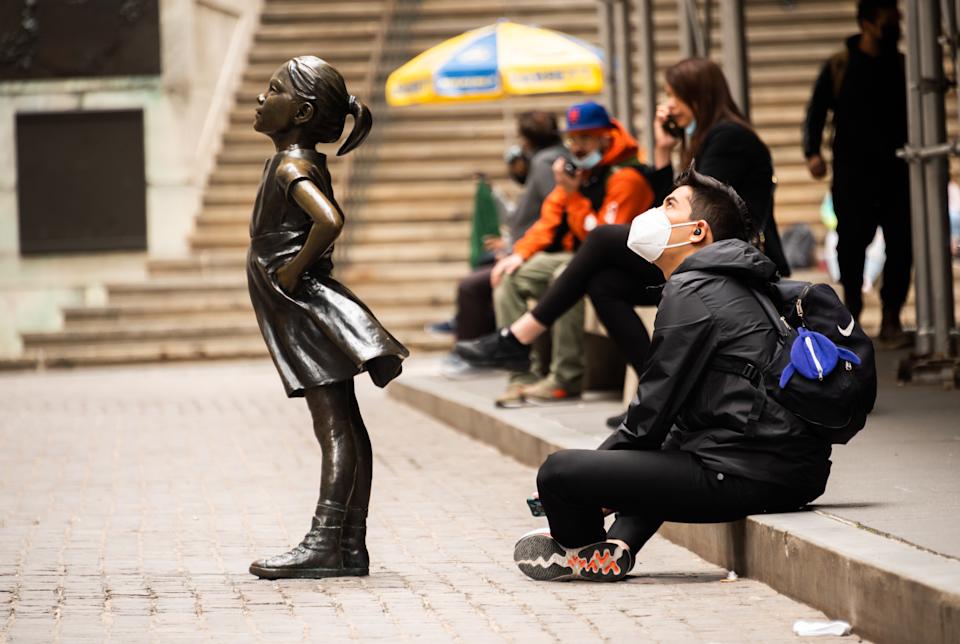 NEW YORK, NEW YORK – MAY 11: A person sits by the Fearless Girl Statue in front of the New York Stock Exchange in Wall Street on May 11, 2021 in New York City. New York Governor Andrew Cuomo announced pandemic restrictions to be lifted on May 19. (Photo by Noam Galai/Getty Images)