Stock futures ticked up Thursday evening after a mixed session earlier, when the Nasdaq ended within striking distance of a record high while the Dow posted a fourth straight session of losses.

Technology stocks rallied during Thursday's regular session as Treasury yields fell. Traders piled back into bonds after selling immediately following the Federal Reserve's monetary policy decision and updated projections on Wednesday, which suggested two interest rate hikes could take place by year-end 2023. The benchmark U.S. 10-year Treasury (^TNX) rose by as much as 10 basis points to 1.59% mid-week before tumbling back to 1.51% on Thursday.

The Fed's projections this week suggested a more hawkish tilt to monetary policy than many market participants had anticipated for the coming years, with the Fed signaling it would eventually ease up some of its highly accommodative monetary policy support even with the economy not yet full recovered from the pandemic at present. Thursday's weekly jobless claims report from the Labor Department showed an unexpected increase in initial unemployment filings, underscoring the still-choppy recovery taking place across the U.S.

"The labor market remains constrained by supply shortages that are outstripping demand and preventing a stronger recovery," Rubeela Farooqi, chief U.S. economist for High Frequency Economics, said in a note Thursday. "However, we expect further strengthening ahead as the economy continues to rebalance."

"That was also the message from Fed Chair Powell in his press briefing on Wednesday," Farooqi added. "He expects a strengthening labor market and continued job creation as constraints on supply ease over the summer months and into the fall."

Still, a string of hotter-than-expected prints on inflation, as well as myriad anecdotes about supply chain disruptions and rising prices for producers and consumers, has also made the case for some tightening of policy, many pundits noted. Stocks could see some choppiness in the near-term as investors continue to appraise monetary policymakers' next moves.

"With the way inflation has been coming in of late, it makes perfect sense that some people giving their dot plots would expect some increases in rates earlier than before," Tim Johnson, BNP Paribas Asset Management head of global multi-sector fixed Income, told Yahoo Finance. "So I'm not surprised, and I think the market has been really complacent and comfortable with the backstop of the Fed for a long time. We're in a transition phase now and there's going to be a little bit of turbulence."

Others offered a similar take.

“The market thought the Fed was going to be behind the curve when it comes to keeping inflation in check,” Shawn Cruz, TD Ameritrade’s Trader Services senior manager, told Yahoo Finance. “By the Fed at least now acknowledging that there are going to be some inflationary pressures, they are going to have to tighten policy, I the market now has a little bit more faith in the Fed to keep inflation under control." 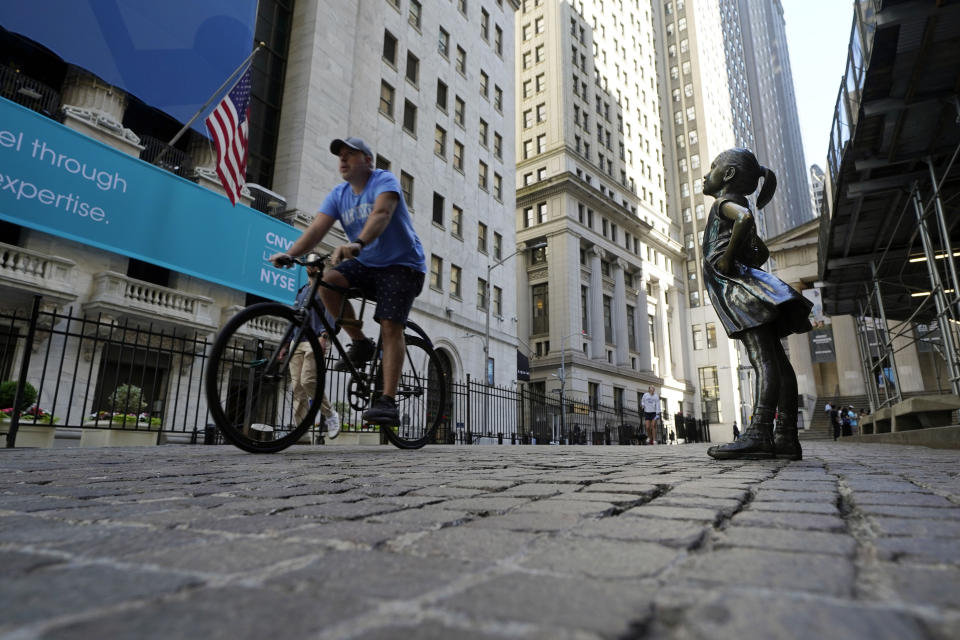 The “Fearless Girl” statue faces the New York Stock Exchange, Wednesday, June 16, 2021. Stocks are off to a mixed start on Wall Street Wednesday as traders wait for the latest decision on interest rates from the Federal Reserve. (AP Photo/Richard Drew)