Contracts on the S&P 500 edged up. Earlier, the three major U.S. stock indexes closed out the session lower, with both the S&P 500 and Nasdaq pulling back from record highs logged earlier this week.

Traders are anxiously awaiting the conclusion of the Federal Reserve's latest monetary policy meeting, which will culminate with a policy statement Wednesday afternoon and a press conference from Federal Reserve Chair Jerome Powell. Both come at a critical juncture in the U.S. economic recovery, with economic activity accelerating and producing inflationary pressures that some market participants believe may warrant a nearer-term shift to monetary policy than the central bank has currently telegraphed.

On Tuesday, new economic data showed producer prices surged at the fastest year-on-year rate on record, with inflationary pressures reverberating across the supply chain as demand picks up. The data added to a spate of other readings corroborating these rising prices, with both the core consumer price index and core personal consumption expenditures at a near 30-year high in May.

"I do think this impulse of inflation, although transitory, is going to be much higher than the Fed and market participants are expecting right now. I'm expecting some more hotter inflation data, but ultimately those pressures ease as we get into 2022." Jeff Schulze, investment strategist at ClearBridge Investments, told Yahoo Finance. He added he expects the Fed to begin laying out a path toward tapering its asset purchase program as soon as August or September, but that actual tapering will likely not ultimately begin until next year.

For now, the Federal Reserve has continued its quantitative easing with asset purchases taking place at a rate of $120 billion per month and kept interest rates near zero, and has maintained that it believes inflation pressures will prove transitory.

"The reopening of the economy has continued as COVID cases have dropped, and all the near-real-time indicators of economic activity have improved markedly," Ian Shepherdson, chief economist for Pantheon Macroeconomics, wrote in a note Tuesday. "Unemployment, however, remains elevated, despite some 3.5 million people still absent from the labor force, compared to the pre-COVID level."

"The Fed, in short, is not yet in a position to declare that 'substantial further progress' — the test for beginning to taper its asset purchases — has been made," he added. "The question for markets and Chair Powell [Wednesday], though, is whether sufficient progress-towards-progress has been made to allow the Fed to start talking about tapering." 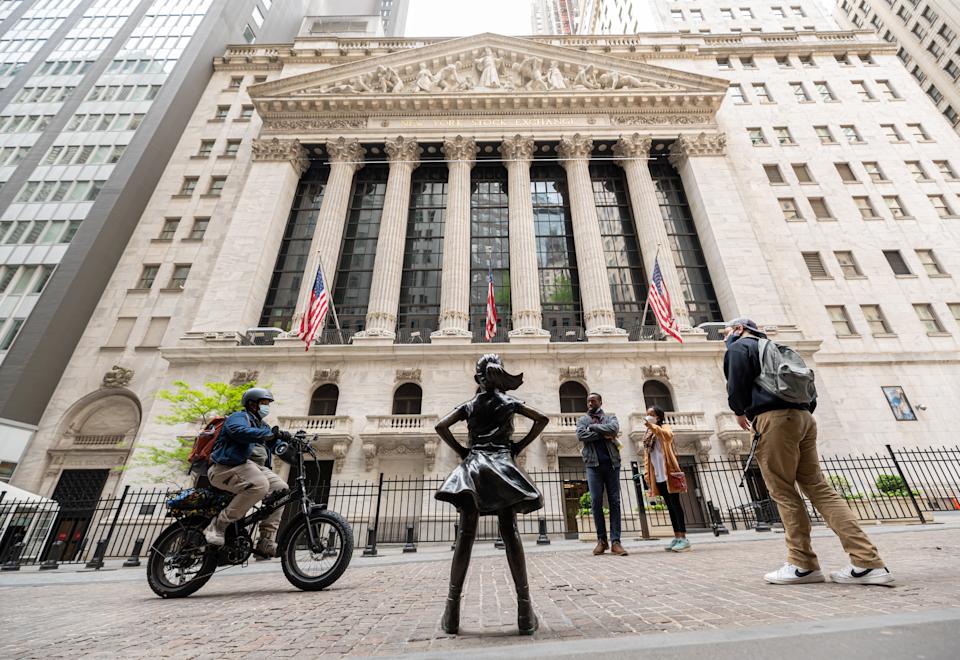 NEW YORK, NEW YORK – MAY 11: People visit the Fearless Girl Statue in front of the New York Stock Exchange in Wall Street on May 11, 2021 in New York City. New York Governor Andrew Cuomo announced pandemic restrictions to be lifted on May 19. (Photo by Noam Galai/Getty Images)