Leading up to its earnings report, Snowflake (SNOW) stock jumped from $188 to $235. So, when the earnings announcement was made, Wall Street had already baked in much of the good news. Yet the stock was still able to churn out a gain of 4% on the news, putting the market capitalization at $70 billion.

Snowflake went public in September and raised a hefty $3.3 billion. On the first day of trading, the shares soared by 111%. But this would not be the end of the gains. Snowflake stock would eventually hit a high of $429. However, like many other hot tech IPOs, the company’s shares would then suffer a bear move.

Despite all the gyrations, the fact remains that Snowflake continues to grow like a weed. Among the larger enterprise software players, it is one of the top growers across the globe.

In the fiscal first quarter, revenues spiked by a sizzling 110% to $228.9 million, which beat the analysts’ consensus of $213 million. Product revenues, which are a metric that Snowflake focuses on, was also up by 110%.

That being said, the company continues to post net losses. In Q1, net losses came in at $203.2 million. Then again, the company has remained focused on investing heavily in R&D, sales and marketing. There are also large non-cash charges because of the issuance of equity stock options, which is common for newly public companies.

For the second quarter, Snowflake is projecting product revenues of $235 million to $240 million. This would translate to a growth rate of between 88% to 92%. There will also likely be improvements in operating margins as the company benefits from its scale.

A key measure for future growth is RPO or remaining performance obligations. This essentially takes into account the existing contracted revenues, and based on this, Snowflake saw a 206% increase in the quarter to $1.4 billion.

Another sign of the underlying strength of the company’s platform is the net revenue retention rate, which is at 168%. This means that customers will generally buy more software over time.

It should be noted that there are 104 customers who generate more than $1 million in revenues on an annual basis, with the total base landing at over 4,500.

Snowflake is disrupting the data warehouse market, which has a market opportunity of $14 billion. Consider that this legacy technology is expensive, requires hardware installation and uses on-premises software.

Regarding Snowflake, it has built a cloud-native platform, which is called the Data Cloud. It is easy to spin-up a database without the need for a DBA (database administrator). Snowflake’s platform also has seemingly unlimited storage, so it is possible for customers to get a single view of their data. This makes it much easier to perform analytics and AI (artificial intelligence) applications.

What’s more, the Snowflake business model is attractive. The company charges based on usage, not an annual subscription. This is becoming much more common in the software world, as seen with companies like Twilio (TWLO), Stripe and JFrog (FROG).

But ultimately, the big play for Snowflake is the traditional database market, dominated by mega operators like Oracle (ORCL). The market size for this space is at $81 billion.

So even though Snowflake stock is far from cheap, there is still lots of room for growth. As a result, a premium valuation is definitely warranted.

Turning to the analyst community, Snowflake stock has 11 Buys and 12 Holds that have been assigned in the past three months. So, Snowflake is a Moderate Buy. At $275.63, the average analyst price target implies 16% upside potential. (See Snowflake stock analysis on TipRanks) 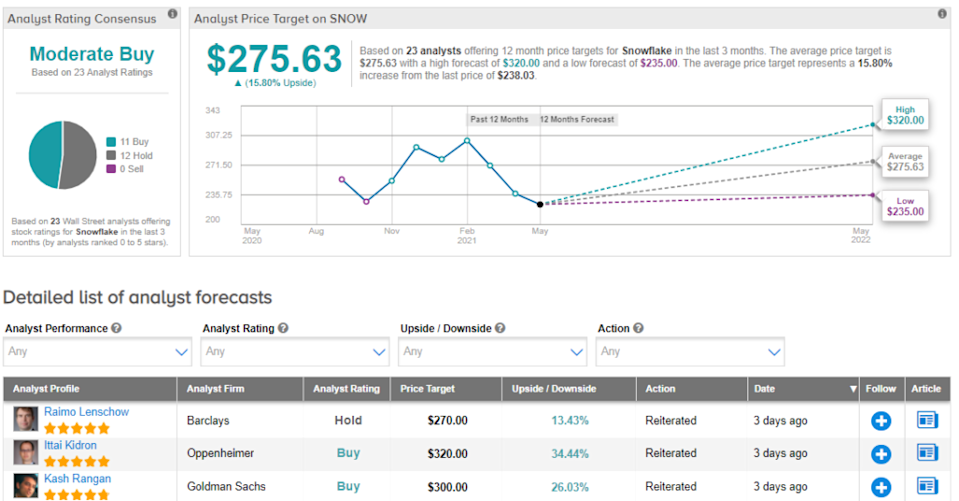 Disclosure: Tom Taulli held no position in any of the stocks mentioned in this article at the time of publication.