The shares of Microsoft Corporation (NASDAQ:MSFT) are down 0.8% at $245.27 at last check, as Big Tech struggles with investors' inflation fears ahead of the big Federal Reserve decision this week. The equity is still up 32.2% year-over-year, though, and has just recently hit an April 27 record high of $263.19. Thus, it may be the perfect time to buy the tech giant on the dip, as MSFT's pullback has placed it near a trendline with historically bullish implications, which could help the stock resume its path higher.

On the charts, the security just came within one standard deviation of its 80-day moving average, after spending roughly two weeks above this trendline. According to data from Schaeffer's Senior Quantitative Analyst Rocky White, 10 similar signals have occurred in the past three years. Microsoft stock enjoyed a positive return one month later in 78% of those cases, averaging a 3.8% gain. From its current perch, a comparable move would put MSFT just over the $254 mark, an area that's been a ceiling the last few months. 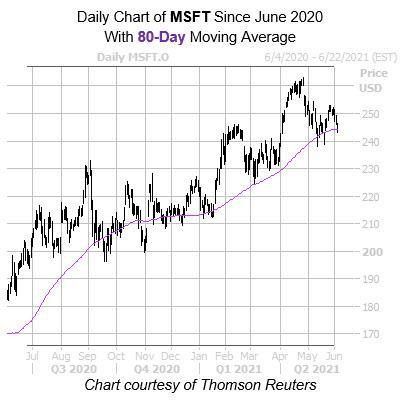 An unwinding of pessimism in the options pits could keep the wind at the equity's back. This is per MSFT's Schaeffer's put/call open interest ratio (SOIR), which sits higher than 92% of readings from the past year. In other words, short-term option traders have rarely been more put biased.

Now seems like a good opportunity to weigh in on Microsoft stock's next move with options. The security's Schaeffer's Volatility Index (SVI) of 19% stands in the low third percentile of its annual range, indicating options players are now pricing in low volatility expectations.