A group of Democratic senators are calling on the Consumer Financial Protection Bureau (CFPB) to address the nation’s ever-growing medical debt.

“While the COVID relief packages passed by Congress have helped to defray some of these costs through financial subsidies and coverage for COVID-19 vaccines and testing, consumers are still paying associated health costs for treatment of the disease,” the senators stated. “For those Americans who sought treatment out of their networks, they may bear the full cost of their COVID-19 treatments.” 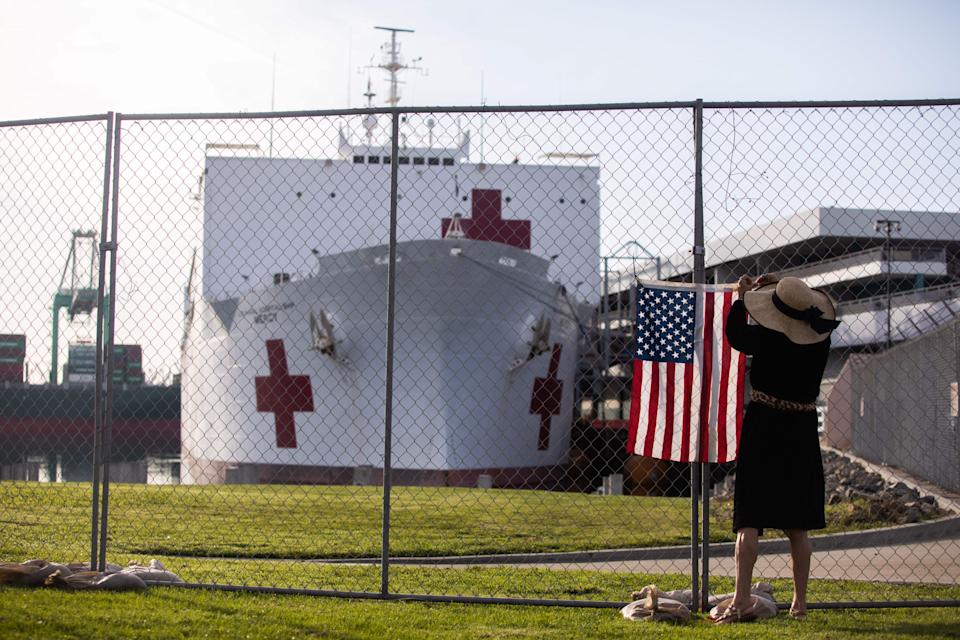 A woman hangs a US flag in a fence in front of the US Navy Hospital ship Mercy on March 28, 2020 at the Port of Los Angeles in Los Angeles, California. (Photo by APU GOMES/AFP via Getty Images)

A survey from LendingTree found that a majority of Americans (60%) have been in medical debt with costs averaging between $5,000 to $9,999. Leading causes were emergency room visits (39%), visits with doctors and specialists (28%), childbirth and related care (22%), and dental care (20%).

“The problem is that [most] medical debt is involuntary,” Sen. Murphy told Yahoo Finance. “It’s not a choice.” 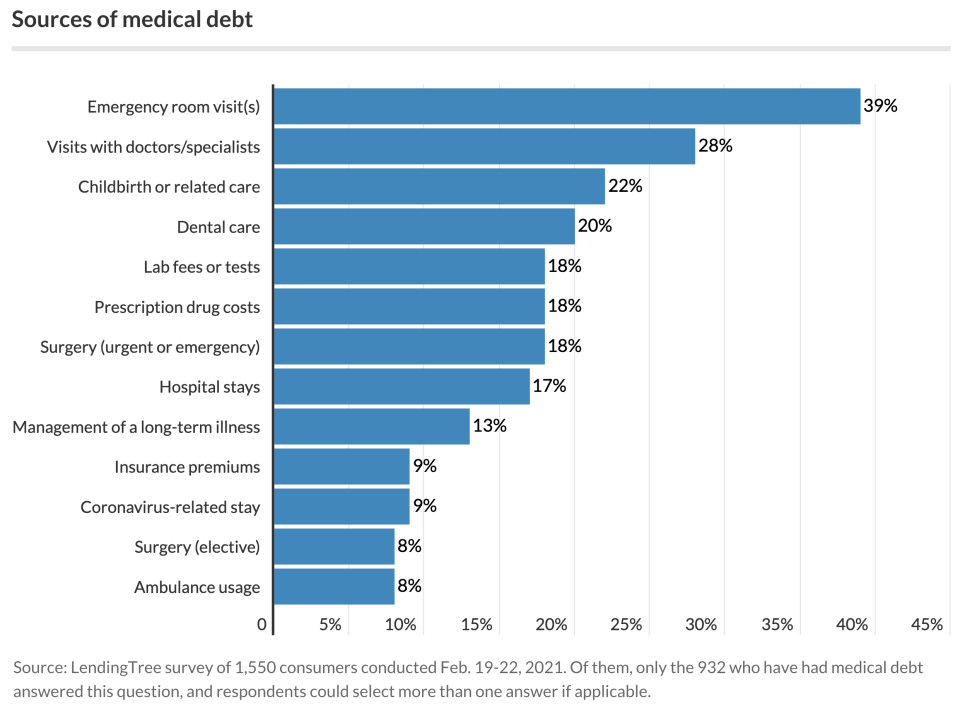 ER visits are the leading cause of medical debt. (Chart: LendingTree)

The senators laid out a list of actions for the CFPB to take to address the issue.

The suggestions includes prohibiting the furnishing of medical debt collection items to credit reporting agencies; requiring debt collectors to disclosure any applicable financial assistance or potential coverage plans; working with the IRS to issue an FAQ on Obamacare’s charity care provisions; require debt collectors to refrain from collecting or reporting on individuals if they state they’re in the process of appealing or disputing an insurance denial or billing, or applying for financial assistance; limiting the number of collection calls placed per consumer; do an additional analysis of medical debt complaints received; and issue a corresponding report for researchers and policymakers to use.

"We have received the letter and are reviewing it," the CFPB told Yahoo Finance in a statement. "We will remain in dialogue with Congress regarding the issue of consumer debt for medical care."

'Those deductibles can lead to significant debt'

Medical debt is the leading cause of bankruptcy in the U.S. As of April 2021, roughly 21 million Americans holding $46 billion of medical debt faced collections, meaning that a third-party debt collector is trying to obtain the money owed.

"There are a number of ways in which the current system is too expensive, inefficient, and failing consumers who are still struggling financially from the worst health and economic crisis in a century," Taylor told Yahoo Finance. "We are pleased to see this letter and other recent actions by members of Congress and the administration to end surprise medical bills, remove the burden of medical debt, and prioritize protecting families from industry abuses."

Murphy noted that while the the Affordable Care Act (also known as Obamacare) helped as millions of Americans lost employer-sponsored insurance amid the pandemic, more can be done. 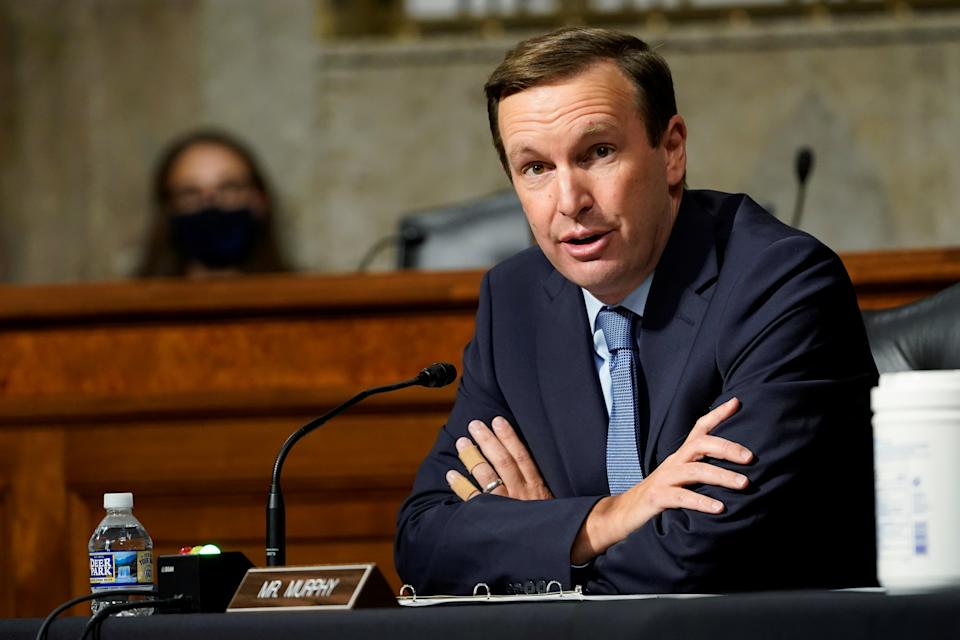 "While the Affordable Care Act has been a gift to people during the pandemic with so much job loss and job shifting, it’s not surprising that there are people that are going big periods of time without coverage," he said. "You’ve also seen the shift over the last five years to greater cost sharing and higher deductibles. Those deductibles can lead to significant debt."

In 2019, the average individual deductible was $1,931 and the average family deductible was $3,655. Deductibles and premiums accounted for 11.5% of median household income that year, which was a 9.1% increase from the prior decade. However, they only account for roughly 9% of medical debt.

“The COVID-19 pandemic highlighted the many cracks that remain in our health care system into which people fall, sometimes plummet, regarding debt incurred for their health care,” they wrote. “It is timely to reexamine the burden of medical consumer debt.”

Made with Flourish$10.3 billion in crowdfunding campaigns

The Biden administration has begun taking steps towards addressing the issue of health care costs.

Earlier this week, the White House advanced a bill that President Trump had implemented — the No Surprise Act — which would protect consumers from surprise medical costs and balance billing.

“While it’s good that we will have less surprise billing, medical debt is normally accumulated because you have to have health care interventions done that are mandatory to save your life,” Murphy said. “There’ll be times at which somebody may be able to avoid a bigger bill than is necessary, but I don’t think that legislation will have a dramatic downward impact on the number of people that have significant medical debt.”

In the meantime, Americans increasingly rely on the generosity of others.

RIP Medical Debt, a New York-based 501 charity that uses donations to buy up people’s medical debt, recently announced a purchase of $278 million in medical debt owed by roughly 82,000 patients in the Tennessee and Virginia regions. 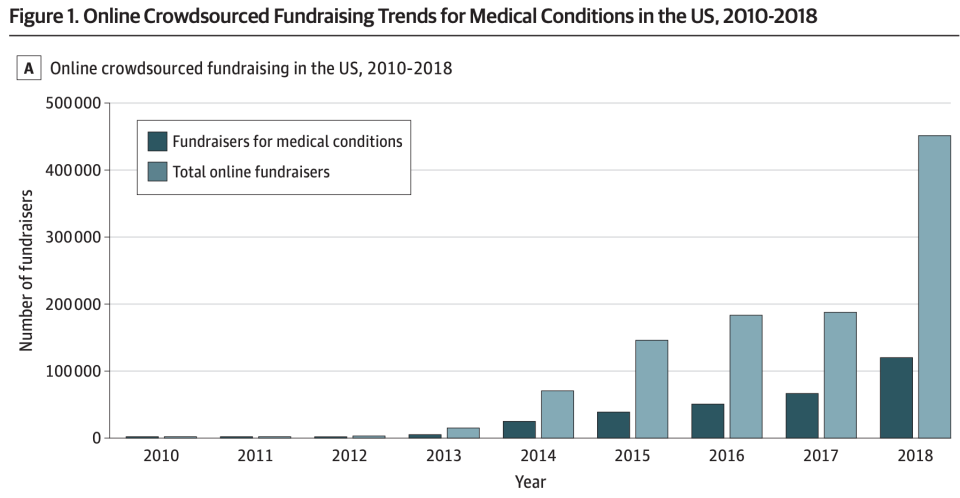 Americans also use crowdfunding sites to raise money for paying off medical debt. A study from the Journal of the American Medical Association (JAMA) found that between May 2010 and December 2018, 26.7% of the 1,056,455 fundraisers on the crowdfunding site GoFundMe were for health-related costs. And those health-related campaigns sought a collective total of nearly $10.3 billion and raised about $3.7 billion.

“That’s really fascinating, but it’s not the solution,” Murphy said. “The solution in the long run is to a) get to a point where nobody goes into debt because of medical costs and b) make sure that we treat that debt differently than we do other consumer debt.”

Adriana Belmonte is a reporter and editor covering politics and health care policy for Yahoo Finance. You can follow her on Twitter @adrianambells. If you would like to share your story of dealing with medical bills and other health care costs, you can reach her at adriana@yahoofinance.com.