The market for 3D interactive content, including video games and 3D entertainment, is expanding rapidly. Due to the COVID-19 pandemic, user engagement has risen across 3D entertainment platforms as more users play 3D video games or indulge in 3D virtual experiences.

Roblox is an online entertainment platform that had 42.1 million average daily active users (DAU) at the end of Q1. The company went public in March this year.

Roblox users are able to enjoy a new category of social interaction referred to as "human co-experience" where they can interact with other users in a virtual 3D digital world.

Roblox Cloud consists of the infrastructure and services powering its platform. The company’s platform depends largely on developers and creators. Users need to purchase a digital currency called Robux, which can subsequently be used to shop for virtual clothing accessories and simulated gestures or emotes.

A majority of the company’s revenue is generated through the sale of virtual items on its platform. Roblox recognizes the majority of its revenue over the estimated average lifetime of a paying user using a metric called Bookings, which is the amount of virtual currency purchased by users over a given period.

In Q1, Roblox’s average bookings per DAU (ABPDAU) was $15.48, up 46% year over year. For the month of April, bookings ranged between $242 million to $245 million, an increase of 59% to 61% year-over-year. The company continues to see user engagement and monetization increasing for the rest of the year.

The company retains part of the transaction revenue and the rest gets shared between the developers who then have the option to either cash out their Robux by converting them into dollars or reinvesting them into developer tools. (See Roblox stock analysis on TipRanks)

Roblox also has a subscription platform called Roblox Premium with various subscription tiers that start from $4.99 each month and can go up to $19.99 per month. A subscription to this service offers a user a monthly Robux allowance and a 10% bonus when buying the digital currency on its platform.

The company said at its Q1 earnings call that over the mid-to-long term, it expects that more experiences on its platform will be supported by its subscription services. Roblox said that so far, its current subscribers to Roblox Premium have continued with their subscriptions.

Roblox calculates the average lifetime for a paying user as the weighted average of the time paying users have spent on the platform and the time that they are likely to continue to spend on the platform. This was a period of 23 months at the end of Q1.

The company’s core growth drivers continue to be the expansion of its user base across all age groups and geographies. The company has recently gone live in China and has entered into a strategic partnership with Tencent Holdings to bring its platform to Mainland China.

While the Roblox platform has been customized for use on phones, tablets, computers, and Xbox consoles, the company hopes to take its platform to Nintendo’s (NTDOY) Switch and Sony’s (SNY) PlayStation in the future.”

On June 1, Truist Financial analyst Matthew Thornton raised the price target from $83 to $103 and reiterated a Buy on the stock. The analyst said in a research note to investors that while RBLX’s bookings in Q1 were 14% above consensus, its Q2 bookings are “at least mid-single-digit-percent above consensus.”

Thornton also added that the focus for investors is likely to remain on Roblox’s operations in China.

Shares of Roblox have shot up by 49.3% in the past month.

Consensus among analysts on Wall Street is a Strong Buy based on 7 Buys. The average analyst price target of $87.43 implies approximately 12.5% downside potential to current levels. 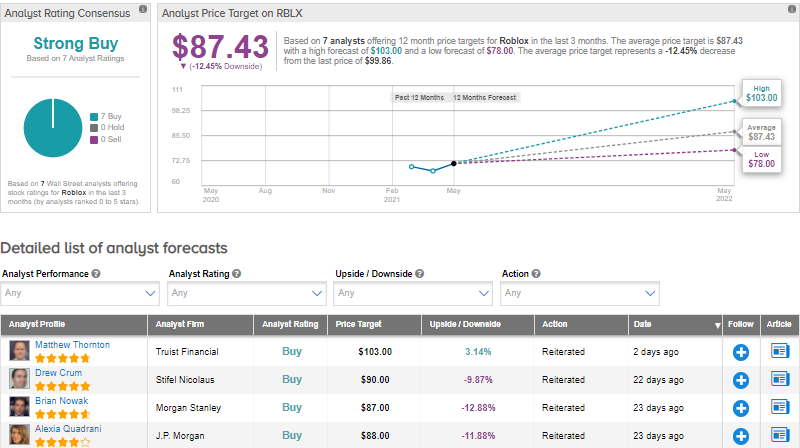 Unity is a platform for the creation and operation of interactive 3D content in real-time. The platform provides a comprehensive portfolio of software solutions for developers to create and monetize 2D and 3D content for tablets, PCs, mobile phones, and consoles.

The content created through the Unity platform can be deployed on more than twenty platforms including Microsoft Windows (MSFT), Apple’s (AAPL) Mac, Nintendo’s Switch, and Sony’s PlayStation.

The company generates revenues through monthly subscriptions for its real-time 2D and 3D interactive content development tools. Unity also earns revenues through revenue sharing arrangements and usage-based models, along with its monetization products, Unity Ads, and Unity IAP (In-App-Purchases). These products help developers grow their end-user base and monetize their content.

Last month, the company announced its Q1 results. Unity posted revenues of $234.8 million, up 41% year-over-year, which represents the tenth consecutive quarter of revenue growth above 30%.

In the first quarter, 837 of the company's customers generated revenues of more than $100,000 each in the trailing 12 month period.

The company’s robust Q1 results prompted the company to raise its FY21 outlook and now expects revenues to range between $1 billion and $1.015 billion, a year-over-year rise of 29% to 31%. This will be an important milestone for the company if it reaches this revenue guidance as according to Unity, “few software companies scale to the $1 billion mark”. Over the long term, Unity expects its revenues to grow at a rate of 30%.

However, the company’s revenue outlook for FY21 assumes a hit of $30 million related to Apple's Identifier For Advertisers (IDFA) that came into effect in April this year. Apple’s IDFA came into force with the launch of Apple’s iOS 14.5. This development will result in app developers being unable to track a user’s IDFA if a user opts out of sharing their privacy details while downloading an app from AAPL’s app store.

Unity talked about the impact of the IDFA in its earnings release, “We have been preparing for IDFA for the last two years. So far, spending on our platform is strong, our contextual model (which does not rely on IDFA) is performing well, and customer feedback is strong. Early indications give us confidence that we are performing better than other players in the market and while we continue to believe that IDFA will reduce our revenue by approximately $30 million in 2021, we are raising our full year guidance by $50 million.”

The company forecasts a loss from operations of between $90 million and $100 million for FY21.

For the second quarter, Unity expects revenues to be between $240 million and $245 million. This forecast includes two months when the IDFA came into effect and indicates year-over-year growth in revenues of 30% to 33%.

In Q2, the non-GAAP operating loss is anticipated to range between $30 million and $40 million as Unity continues to invest in its business. (See Unity Software stock analysis on TipRanks)

Interestingly, Unity Software’s President, CEO, and Executive Chairman John Riccitiello referred to how Unity fits into the 3D Metaverse concept at its earnings call. A 3D metaverse is where people interact in 3D virtual experiences.

Riccitiello commented, “So what I think so many get wrong when they think of the metaverse is they see it as a competition as to whether Roblox or Fortnite will win. I see it very differently. There'll be millions of endpoints in the metaverse. And these will include shopping sites, games, social networks, messaging apps, 3D conferencing and job sites and constructions augmented by real-time 3D in the form of Unity Reflect.”

“We can get all these websites going, millions of endpoints or destinations are the metaverse. And it will expand in huge ways in years to come. And what we're doing is providing a lot of the underlying infrastructure to make this happen,” Riccitiello added.

Last month, Wedbush analyst Michael Pachter reiterated a Buy but lowered the price target from $175 to $125 on the stock. Pachter said in a research note to investors, “The lower guidance figure provided last quarter included a $30 million headwind from Apple’s implementation of IDFA last month, and Unity management continues to believe that headwind exists, but now expects growth in line with its prior expectations notwithstanding the drag on revenues."

"Losses will continue, with guidance for $(90 – 100) million in losses for FY:21, as Unity plans to continue to make R&D investments and to grow its platform and product suite. We expect investor confidence to be restored by Unity’s robust guide,” Pachter added.

Shares of Unity Software have risen by 2.2% in the past month.

Consensus among analysts on Wall Street is a Strong Buy based on 6 Buys and 1 Hold. The average analyst price target of $127 implies approximately 35.8% upside potential to current levels. 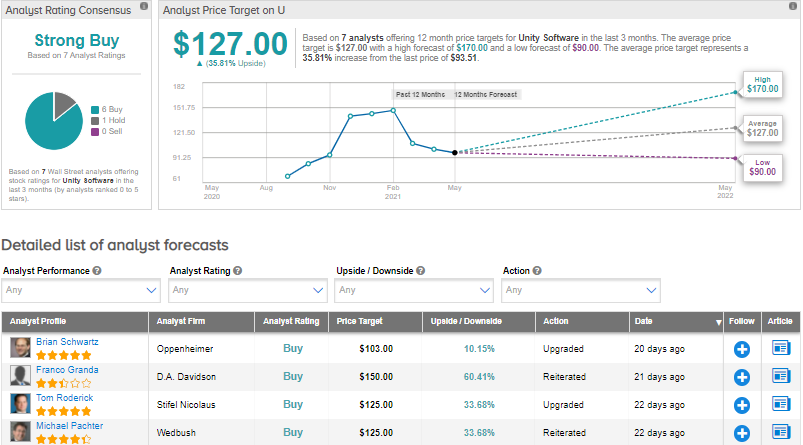 Roblox is looking at rapidly expanding beyond the U.S. and Canada while targeting a wider age demographic with its 3D content. Meanwhile, Unity is looking at investing more into its platform to expand its software offerings.

While analysts are bullish about both stocks, based on the upside potential over the next 12 months, Unity seems to be a better buy.