Robinhood Markets, Inc filed an S-1 with the SEC Thursday afternoon, signaling the company's intent to go public in an initial public offering.

The stock trading app will trade under the ticker HOOD.

The move comes just after the company settled a laundry list of complaints with FINRA for $70 million, including charges focusing on options trading, customer service, outages, display of incorrect data, and more, agreeing to pay a fine of $57 million and almost $13 million in restitution to customers.

The company said it has 17.7 million monthly active users with over 50% first-time investors and $81 billion assets, up from just $19 billion in March 2020. Last year's rise of daytrading and new entrants into the market saw Robinhood revenues jump to $959 million from 2019's $278 million, a 245% increase.

Though primarily used for trading stocks, 17% of the company's revenue comes from cryptocurrency trading — with 34% of Q1 2021's crypto revenue coming from Dogecoin transactions.

The most lucrative revenue stream for the company, however, comes from options. According to the filing, options trading makes up the largest source of revenue, making up $197 million of its $522 million Q1 revenue, more than the $133 million it made on stock trades or $87 million on cryptocurrency trades. 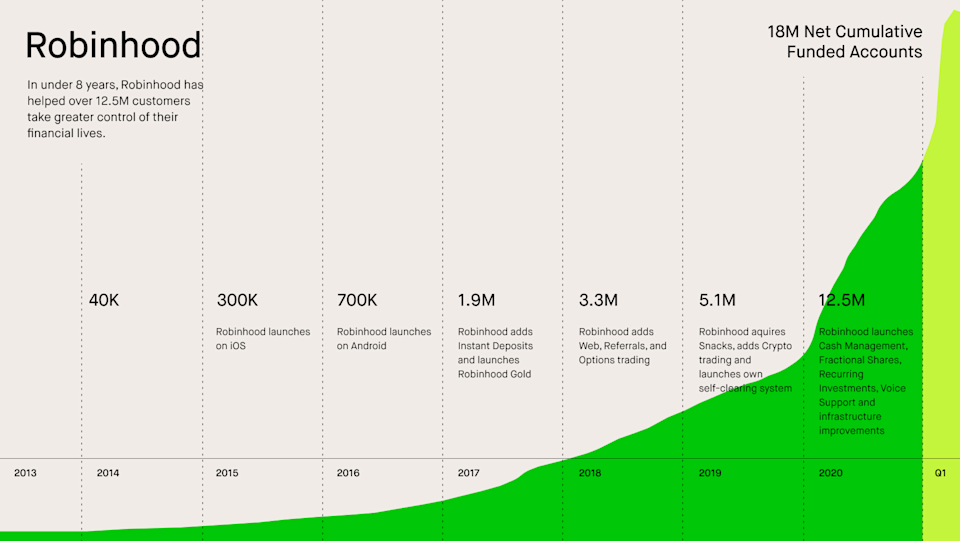 Robinhood was founded by current CEO Vladimir Tenev and Baiju Bhatt in 2013, and in the past decade adapted bold Silicon Valley approaches to the once-stodgy world of Wall Street and investment brokerages. The company's success and adoption of zero-commission trading led its competitors to similarly drop trading fees that long provided a lucrative revenue stream for the industry.

Instead, the company pioneered a business model based on payment for order flow (PFOF), where market makers pay Robinhood for the right to execute trades (they still have to be at the best price), allowing those companies to have more insight into the portfolio moves of retail customers.

According to the filing, 75% of the company's revenue came from PFOF via market makers, especially from Citadel Securities, LLC. As the company's risk factors note, any changes to PFOF, which has been controversial in the past, would have a great effect on the company's business.

"Any new or heightened PFOF regulation may result in increased compliance costs and otherwise may materially decrease our transaction-based revenue," reads the S-1. This would be a bigger deal to Robinhood than to others, the company points out: "Because certain of our competitors either do not engage in PFOF or derive a lower percentage of their revenues from PFOF than we do, any such heightened regulation or ban of PFOF could have an outsize impact on our results of operations."

The company has brought stock, bond, and crypto trading to the masses thanks to its affordability, and had 31 million accounts at the end of the first quarter 2021, according to the FINRA settlement document. With the ease to open accounts from its mobile-first approach, a smaller amount actually have funds — 18 million. 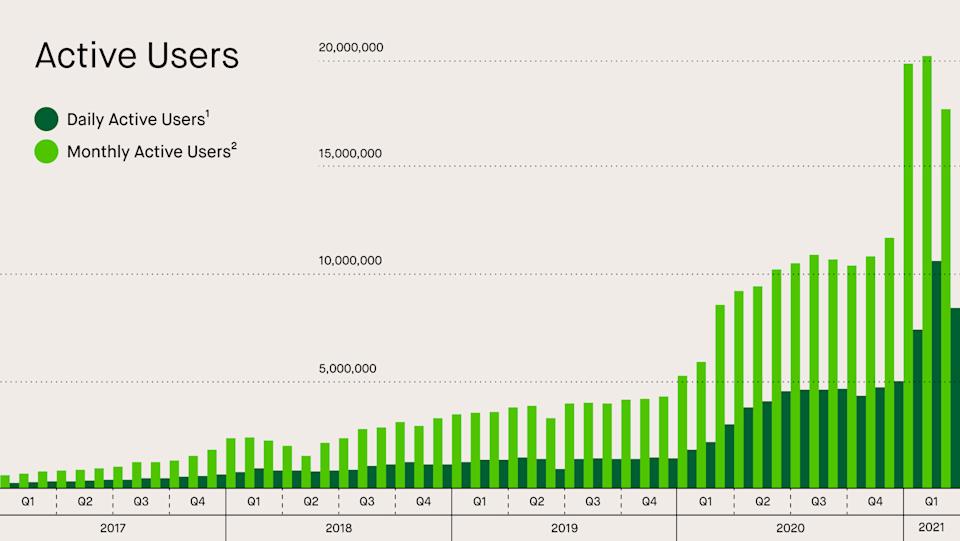 The company recently experienced significant growth during the pandemic and its stock-trading mania, jumping up to that 31 million from just 500,000 users in 2015. FINRA said that many are in a demographic that are young and new to the market, aligned with Robinhood's stated goal to "democratize" the market. To wit, the median account balance is just $240, and the mean $5,000.

That growth has come at a cost, with some significant black eyes causing reputational damage to the company and earned Tenev, CEO and co-founder, a trip to Capitol Hill (virtually) to testify about the company not letting customers buy shares in companies including GameStop (GME) and AMC (AMC). Though popular with a new generation of users, it has also born the brunt of their anger when things have gone wrong or when trading had to be restricted.

That anger has resulted in 49 class action suits currently against the company related to anger from trading restrictions in 2021, the S-1 disclosed.

The settlement announced Wednesday represented a turning point for the company and a potential path forward in respectability and professionalism, as the company's revamped compliance department, tech, and other infrastructure mechanisms hopefully steel the brokerage from further snafus and pointing it on a better path as it becomes a public company.

"As a result of these investments, we believe we are prepared to handle over 30x the volumes that we struggled with back in 2020, and we systematically prepare for 3x the highest load we've seen in the past," the co-founders wrote in a letter to clients and potential shareholders in the S-1.

Still, however, Robinhood has yet to offer some of the tools that its competitors have — and that many of its frequently trading users want — like being able to decide cost basis accounting. (Currently Robinhood will sell your oldest shares first, called first-in-first-out; you can't choose, called SpecID.)