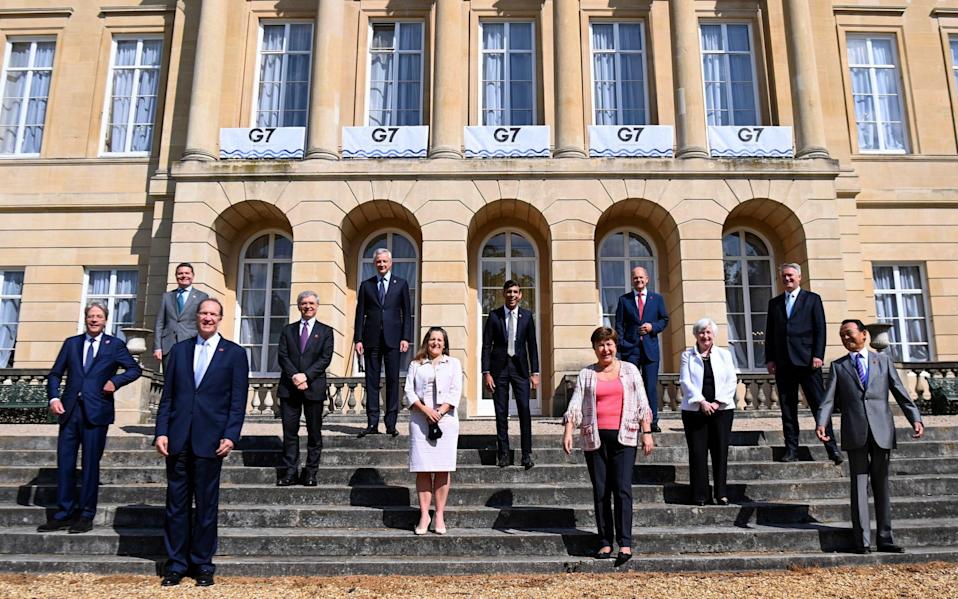 Rishi Sunak has announced a historic crackdown on big tech tax avoidance after thrashing out a deal with finance ministers from across the G7.

The reforms mean that tech giants must pay a global minimum tax of at least 15pc to stop businesses shifting their profits to havens around the world.

The chancellor, who is the host of this stage of the G7 summit at Lancaster House in London, said the tax overhaul was a "huge prize for British taxpayers – creating a fairer tax system for the 21st century".

"I am delighted to announce that today after years of discussion G7 finance ministers have reached a historic agreement to reform the global tax system," he said.

"To make it fit for the global digital age, but crucially to make sure that it is fair so that the right companies pay the right tax in the right places."

The deal, agreed between the UK, France, US, Germany, Canada, Italy and Japan, could boost economies as they recover from the Covid crisis with Mr Sunak saying the fresh tax revenue will "help pay for public services here in the UK".

Big tech companies have become the new tax enemy and Treasury target in recent years as the likes of Amazon balloon in size and become intertwined in daily life. Amazon, which has seen huge demand during the pandemic, paid less than £300m in UK tax in 2019 after logging revenues of almost £14bn. In 2020, its UK revenues surged to hit $26.4bn (£19bn), the fastest level of growth in all of its major markets.

Today's tax deal marks the biggest overhaul of international tax rules for decades, with the current system drawn up in the pre-digital age. However some have argued that it has not gone as far as hoped – US President Joe Biden had initially argued it should be 21pc.

Robert Palmer, director of advocacy group Tax Justice, argued that the move was a "good first step" to make it harder for big companies to dodge taxes but could have gone further.

"Setting the rate at 15pc is far too low, especially compared to the fact that the UK’s rate is going up to 25pc in 2023. This deal won’t do enough for British businesses who are trying to compete with global giants who pay ultra-low levels of tax," he said.

George Dibb, of the Institute for Public Policy Research (IPPR), said the levels need to be higher to "truly end the race to the bottom on tax".

"With the UK corporation tax rate set to rise in 2023, the UK government should be demonstrating leadership and aiming for a global minimum rate of 21pc or higher with the ultimate goal of around 25 per cent," he added.

The shake-up will affect companies with profit margins of at least 10pc. The new formula will mean that 20pc of any profit above the 10pc margin will be reallocated and then subjected to tax in the countries where they make sales.

The Treasury said it addresses the tax challenges arising "from an increasingly globalised and digital global economy".

Arguments have blown up in recent years as nations including the UK have gone it alone to levy digital services taxes, taking a slice of the revenues of the major businesses including search engines, social media sites and online marketplaces.

Mr Sunak went into this week's talks with the goal of ensuring as big a proportion of tax as possible comes to the Treasury amid concerns major US businesses might book all their profits in America regardless of where they sell goods and services – potentially depriving the Exchequer of billions of pounds of revenue.

The tax agreement, thrashed out among G7 leaders in their first face-to-face meetings as a group since 2019, will be discussed in further detail with the group of G20 nations in July, the hope being that other nations will follow suit.

Discussions this week have also resulted in an agreement to take joint action on tackling climate change by following the UK’s example of making it mandatory for firms to report the climate impact of their investment decisions.

The G7 gathering represents a key test of Britain’s post-Brexit diplomatic clout and is being billed as a crucial moment for the future of relations between governments and business worldwide.