We know you know: the meme trade is back.

Clover Health (CLOV) and Wendy's (WEN) were the stars on Tuesday, rallying after shares became the most popular tickers on wallstreetbets, the Reddit forum tracked closely by traders, media members, and Wall Street pros alike for signs of where retail investors might throw their weight around next.

And while some investors and Wall Street strategists aren't too interested in tracking the daily ebbs and flows in meme names, the equity strategy team at Deutsche Bank has for months now been chronicling flows clearly influenced by these new market participants.

And no area of the market has been more shaped by retail participation than single-stock call options.

And while each of us will only live once, stock market memes can clearly live multiple lives.

"Call volumes picked up sharply over the last two weeks while put volumes remained subdued, taking the put/call ratio close to 15 year lows," said Deutsche Bank strategists led by Parag Thatte in a note published on Friday. "The increase has been led by single stock options and ETFs, while index call option volumes have remained largely flat to down. Call volumes have previously been a good indicator of retail involvement in the market."

As the following chart from Deutsche Bank shows, the recent uptick in call buying is not only surprising because of its magnitude — volumes are now nearly equal to the late January peak in GameStop (GME) — but because the economy is re-opening.

It has long been argued by many in the financial world that when the economy "gets back to normal," however we want to define that, individuals will simply be less interested in buying stocks. And yet Deutsche Bank itself ran a survey in late February that suggested retail investors had no plans to abandon the stock market.

And so the "once people can ignore the stock market they will" thesis appears to be on thin ice. 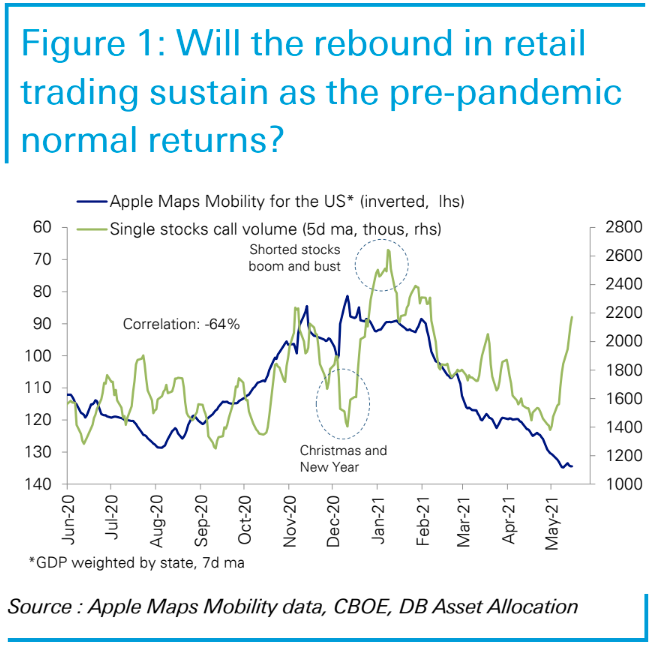 Traders have been buying call options at the fastest pace since the height of the first meme market which peaked in late January. (Source: Deutsche Bank)

"Other indicators of retail involvement such as off-exchange volumes have also picked up in tandem," Thatte adds.

"In turn, a basket of stocks with the highest call exposures has outperformed strongly over the last two weeks, but remains well below its January highs. Indicators of retail involvement had been closely and inversely tied to measures of re-opening and mobility, which have continued to move higher. A key question going forward is whether the very recent pickup in retail trading sustains as the pre-pandemic normal returns, especially with an increasing return to offices, or the fading since the January highs resumes."

By Myles Udland, a reporter and anchor for Yahoo Finance Live. Follow him at @MylesUdland

Colonial Pipeline CEO on paying ransom after hack: ‘Hardest decision I made’