Raymond James: These 2 Stocks Could Spike Over 50%

We’re in interesting times, there’s no doubt about that. The COVID crisis is receding, the economic reopening is proceeding apace – but there are inflationary worries. Many experts are concerned that further cost-of-living increases will result as consumer demand outstrips supply.

On the other hand, the Federal Reserve believes it can curb an outbreak of inflation should it occur without throwing the recovery off track.

Looking at economic conditions, Raymond James strategist Scott Brown noted, "As the economy continues to improve, a lot of bottle neck pressures will start to fade. I don't think there is any reason for the Fed to panic.”

In the meantime, we can start scouring the markets for stocks that primed to bring solid returns. Brown’s colleagues at Raymond James have picked out two – and we’ve used the TipRanks platform to look up their details. These are Strong Buy stocks, which the stock analysts at Raymond James see room for over 50% growth this year.

The company typically sees its best revenues of the year in Q4, with a dip into Q1. This year was no exception. The first quarter revenue of $412.7 million was down from the $502.7 million reported in Q4. Year-over-year, however, PSTG’s Q1 top line was up by $45.6 million, or over 12%. The company typically runs at an EPS loss; in Q1, the 30 cent loss reported was less severe than the 34 cent EPS loss reported in the year-ago quarter.

The solid quarterly results were driven by a rise in subscription revenues, which gained 35% yoy to reach $162.8 million.

Last fall, Pure Storage acquired Portworx, the Kubernetes data services platform, in a deal worth $370 million in cash. This past May, Pure Storage announced the release of Portworx Enterprise 2.8, a new storage product with integrations across the range of Pure Storage’s product and service portfolio. The announcement marks the full integration of the new acquisition.

Raymond James analyst Simon Leopold notes several positives in the outlook for Pure, saying, “Pure generates cash, which should separate it from the crowd. We remain optimistic that the lower priced FlashArray//C, FlashBlade and Portworx enable Pure to gain share and maintain at least mid-teens sales growth.”

The analyst added, "Pure generates cash, which makes it stand-out within the growth crowd. Pure generated nearly $100M of FCF in CY20, and we forecast nearly $200M over the next two years. The balance sheet is healthy with $1.25B of cash and net cash near $500M."

In line with his comments, Leopold rates PSTG shares a Strong Buy, and his $31 price target implies a one-year upside of ~62%. (To watch Leopold’s track record, click here)

Overall, it’s clear that Wall Street agree with Leopold on PSTG. The stock’s Strong Buy consensus rating is based on 8 recent reviews that break down 6 to 2 in favor of Buy versus Hold. The shares are priced at $19.08 and have an average price target of $27.50, giving an upside potential of 44% for the next 12 months. (See PSTG stock analysis on TipRanks) 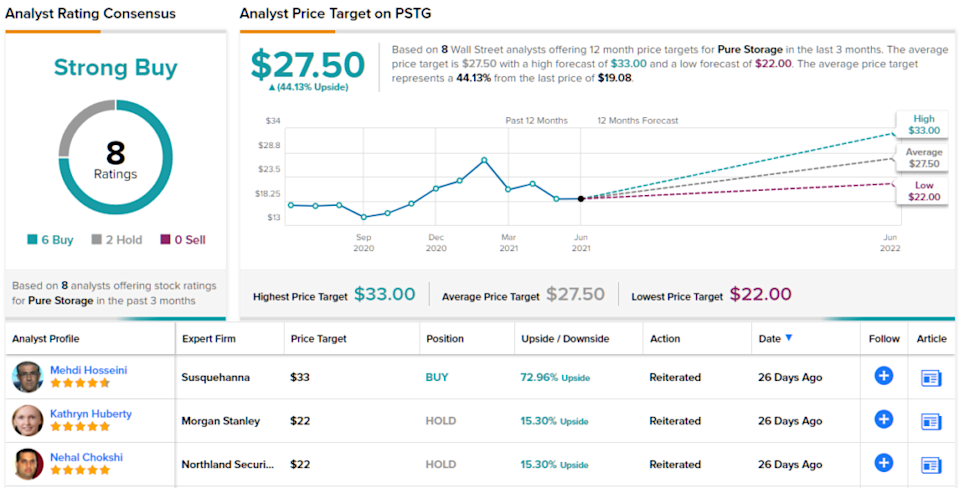 If you like gardening, then you’ve probably used this next company’s products. Scotts is a multinational corporation, based in Ohio, that has specialized in lawn, garden, and pest control products for the consumer market. The company’s brands include Scotts, Miracle-Gro, Ortho, and Roundup, and products range form bird and grass seed, to topsoil and sod, to fertilizers and weed killers. In fiscal 2020, the company saw more than $4 billion in annual revenue.

For the most recent quarter, the fiscal second, Scotts reported $1.83 billion at the top line. This was up 32% year-over-year, and bodes well for the company’s full-year results as the second and third fiscal quarters – coming in the spring and summer months – are typically the company’s strongest. Earnings for fiscal Q2 reached $5.43 per share, up 21% from the $4.47 reported one year ago.

The solid quarterly results were supported by a 23% gain in the US consumer segment, which rose to $1.37 billion. That result was in line with the generally upbeat economy of recent months, as consumer spending has been rebounding while the corona crisis recedes. Hawthorne Gardening, the company’s cannabis subsidiary business, also saw strong growth, and management is guiding toward 40% to 45% sales increase in that segment for the full year.

With this in mind, Raymond james' Joseph Altobello views SMG's current valuation as offering an attractive entry point for investors.

"While we still have much of the season – and very tough compares – in front of us, valuation remains very attractive on a sum-of-the-parts basis," the 5-star analyst noted.

Giving the stock a Strong Buy rating, Altobello says, “[Our rating] is based on our view that the stock offers continued compelling value. This reflects the significant increase in lawn and garden participation last year that appears sustainable and should drive further gains in U.S. Consumer, as well as continued rapid growth for Hawthorne amid a favorable backdrop for cannabis regulation in the U.S.”

The analyst backs his positive stance with a $305 price target, implying room for 56% share appreciation over the coming year. (To watch Altobello’s track record, click here)

Overall, this stock has only three recent reviews on record, – but all three are positive, making the Strong Buy consensus rating unanimous. Shares are priced at $195.5 and the $301.67 average price target suggests a 54% upside potential in 2021. (See SMG stock analysis on TipRanks) 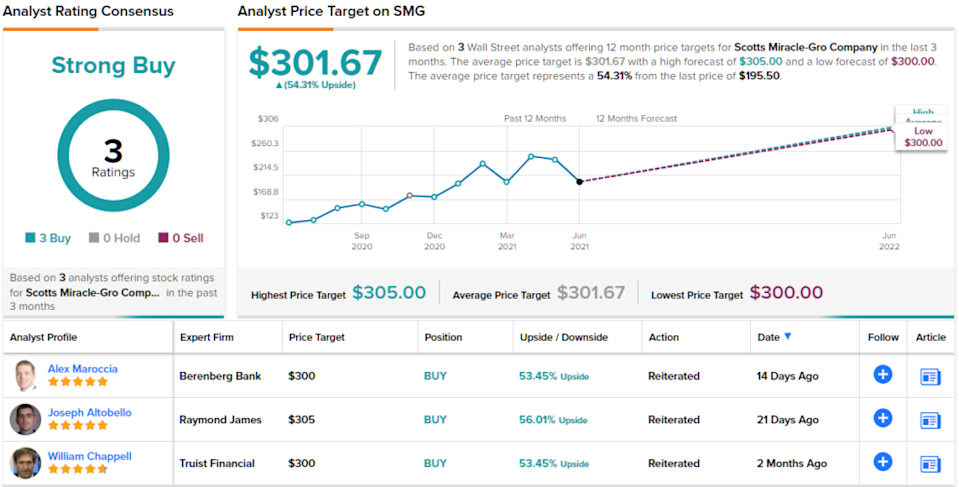