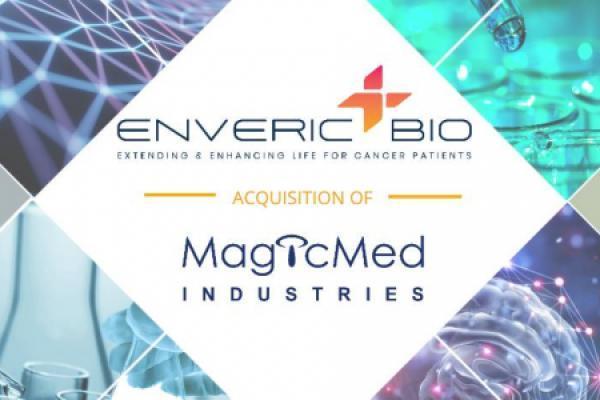 MagicMed Industries Inc., a privately-held biotech company, recently announced its agreement to an acquisition by Enveric Biosciences (NASDAQ: ENVB). This joint venture may be the first, or at least the largest, merger involving both psychedelics and cannabinoids, setting a milestone for each industry and no doubt opening doors for everyone involved.

Two Sides of the Same Coin

MagicMed’s focus has been primarily in the research and development of novel psychedelic molecules. The company most famously created the Psybrary™, a top-tier library of psychedelic derivatives. Enveric has built an impressive portfolio as well, and the company's work lies in the use of cannabinoid-derived pharmaceuticals for the treatment of cancer.

Enveric is hopeful that the result of the combined entity will further expand its pipeline of naturally occurring compounds, making its portfolio even more robust as it welcomes in MagicMed’s wealth of psychedelic-derived molecules. As for MagicMed, going public will grant access to more capital and big pharma connections, allowing the company to test beyond preclinical and bring exciting new drug candidates to market in-house.

“Our mission at MagicMed has always been focused on unlocking the full potential of psychedelic-derived medicines for the treatment of neurological and psychological indications,” mentioned MagicMed’s CEO Dr. Joseph Tucker.

“Complementing our R&D capabilities, working together with Enveric will allow us to leverage the company’s clinical team, all of whom are focused on advancing our extensive pipeline of molecules through the clinic, and ultimately serve the millions of patients who are suffering with mental health issues around the globe.”

Unlike some acquisitions, MagicMed describes this deal to be more of an amalgamation and believes ultimately all will benefit, but perhaps especially the psychedelic-pharmaceutical industry.

“I think it is really transformative for our business. Rather than needing to partner with other companies so that the molecules we create could be advanced, we can now, in the combined entity, develop a new drug candidate molecule from the beginning, through the pipeline and potentially all the way to approval. The real value in a company is the ability to develop the late-stage clinical asset yourself. That's where you really drive the value,” commented Dr. Tucker.

The transition is predicted to be fairly seamless with the teams largely remaining the same. After closing, Dr. Tucker will be appointed chief executive officer of the enlarged company, and David Johnson, chairman and CEO of Enveric, will be appointed executive chairman.

Dr. Tucker also spoke about his contributing expertise and how it’ll translate to working with a significantly larger company.

“Investment industry professionals and scientists speak completely different languages. They don’t normally understand each other at all. I speak both languages, and have been in the middle of the two worlds for more than 20 years. So I really do have a faculty for bringing things together. I can both identify opportunities and find ways to get them funded. That's my whole career — bridging that language barrier which can be a cultural barrier as well.”

The deal, which will result in MagicMed being an indirect wholly owned subsidiary of Enveric, is expected to close during the second half of 2021.

Under the terms of the agreement, Enveric will issue shareholders of MagicMed an aggregate of 9,946,969 shares of Enveric common stock, as well as warrants, options and restricted stock units to acquire an additional 9,039,882 shares of its common stock.

“There is a larger opportunity in terms of access to a much more robust group of sophisticated life science investors and capital by being a Nasdaq-listed company,” Dr. Tucker explained.

“Ultimately, we can build a company that's worth so much more and become much bigger than what MagicMed was originally planning on doing,” Dr. Tucker summed up.

MagicMed is a partner of Benzinga. The information in this article does not represent the investment advice of Benzinga or its writers.