As Governments around the world undertake zero-emission initiatives, hydrogen fuel cell companies are taking the market by storm. Hydrogen fuel cells consist of hydrogen ions that are positively charged by an oxidizing agent and the chemical reaction of these hydrogen ions produces chemical energy. This energy is then converted into electrical energy and heat without combustion.

According to a Market Research Future (MRFR) report from April this year, the fuel cell technology market is expected to grow on a global basis by a compounded annual growth rate (CAGR) of 14.5% between 2020 to 2027.

On May 14, the company completed the restatement of its financial statements for FY18 and FY19 as well as its quarterly filings for 2019 and 2020. PLUG also filed its Form 10-K for FY20 with the United States Securities and Exchange Commission (SEC).

Plug Power is yet to declare its first-quarter results. The company stated, “As previously disclosed, given the time and focus dedicated to completing the restatement and filing of the Form 10-K, the Company is delayed in its customary reporting and review process for the quarter ended March 31, 2021. The Company and its independent auditor are working diligently to complete the first quarter review. The Company expects to file the First Quarter Form 10-Q by June 14, 2021.”

PLUG also said that despite an increase in net revenue in 2020 after the restatement of its financials, EPS in FY20 took a hit due to one-time non-cash charges of $35 million and $6.4 million, respectively, concerning provisions for loss accruals and impairments of long-lived assets, respectively.

In March this year, PLUG announced the need for restating its financials after an audit indicated errors in the accounting for non-cash items including losses accrued for certain service contracts, the book value of right of use assets, and impairments of long-lived assets.

Earlier this month, the company provided a business update and said that in the first quarter of FY21, PLUG expects gross billings of over $70 million and net revenues of $67 million, a jump of 60% year-on-year for each. The company anticipates maintaining cash of over $5 billion on its balance sheet in Q1.

Plug Power’s President and CEO, Andy Marsh, said, “The fundamentals of our business remain robust with record first-quarter gross billings. As evidenced by the continued advancement of our strategic pipeline, we remain firmly committed to executing on our mission to build out the hydrogen economy in North America and beyond. We continue to deliver state-of-the-art fuel cell and green hydrogen solutions to our customers, and remain confident in the growth trajectory of the business.”

The company has entered into several strategic partnerships recently. It has agreed to integrate its ProGen fuel cell engines into BAE’s smart electric drive systems that will provide hydrogen and refueling infrastructure to end customers.

Plug Power has partnered with Chart Industries (GTLS) to develop two green hydrogen plants located in the Mid-Atlantic and the Southeast United States that will generate 15 tonnes of liquefied hydrogen each day and are expected to be operational by the end of next year.

PLUG is currently in the process of forming a joint venture (JV) with Renault expected to be completed by the end of the second quarter this year for on-road light commercial vehicles (LCVs) in Europe. In addition, the company also expects to finalize JVs with SK and Acciona for hydrogen production in Asia and the Iberian Peninsula, respectively, by the third quarter of this year.

The company is focused on building the first green hydrogen network in the United States and has partnered with companies like Brookfield Renewables and Apex to purchase renewable electricity at low cost. By the end of next year, Plug Power expects to generate 70 tons to 100 tons of hydrogen each day. (See Plug Power stock analysis on TipRanks)

On May 17, Oppenheimer analyst Colin Rusch reiterated a Buy and a price target of $62 on the stock. Commenting on the restatement of the company’s financials, Rusch wrote in a research note, “With PLUG completing its restatement with a 3-year combined impact of $6.5M on revenue and ($0.13) on EPS, the key overhang on the stock has been removed. With ~$5B in cash on the balance sheet, key fuel cell and electrolyzer technology, and cost-effective material handling and stationary power offerings, we believe PLUG is well positioned to catalyze and navigate the growth of the hydrogen economy.”

“As we adjust numbers in line with management commentary, we are closely attending to PLUG's execution in ramping its first green hydrogen facilities, manufacturing capacity expansion, and incremental sales agreements. We are encouraged by progress to date in establishing its JVs with both SK Group and Renault and its partnership with ACCIONA in expanding its geographic footprint and sales opportunities,” Rusch added.

Consensus among analysts on Wall Street is a Moderate Buy based on 10 Buys, 5 Holds, and 1 Sell. The average analyst price target of $48.93 implies 77.9% upside potential to current levels. 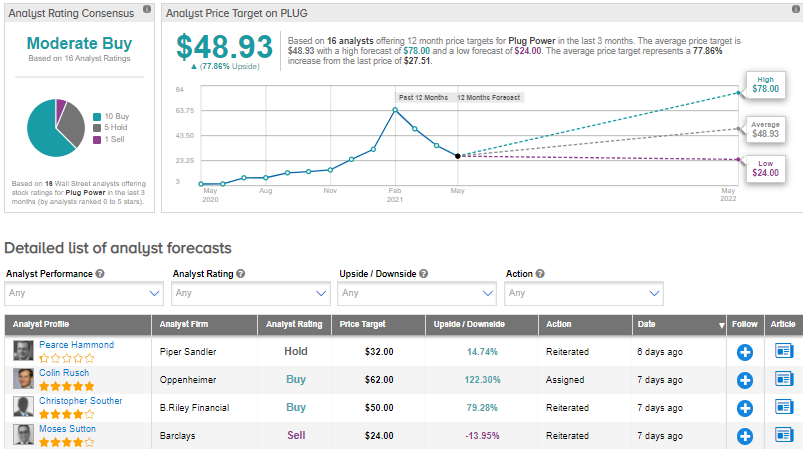 Ballard Power Systems is headquartered in Canada and is a hydrogen fuel cell company that designs, develops, and manufactures fuel cell products that can be used in the transportation and power industries.

Earlier this month, the company announced its fiscal Q1 results with total revenues of $17.6 million, a decline of 26% driven by lower revenues from its power products and technology solutions business. The fall in revenues notwithstanding, Ballard said on its earnings call that its sales pipeline has risen more than 70% over the last five quarters.

Ballard’s adjusted loss before interest, taxes, depreciation and amortization widened from $8.8 million in the fiscal first quarter of last year to $14 million in Q1 FY21. The company reported an adjusted net loss of $0.06 per share in Q1.

Randy MacEwen, President, and CEO of Ballard Power Systems said, “On the technology and product development front, we continued to make measured progress on our key development programs, including ongoing work with our Weichai-Ballard JV in China. We are also tracking ahead of plan on our ‘3×3’ fuel cell stack cost reduction program, enhanced by breakthrough designs and performance from our MEAs and bipolar plates, continued progress with our supply chain, and implementation of advanced manufacturing initiatives.”

As of March 31, the company had an order backlog of around $112 million. In the first quarter, the company’s fuel cell-powered electric buses and trucks over 75 million cumulative kilometers. Europe had the biggest share of the company’s revenues in Q1 with a share of 51.5%, followed by China at 27.3% and North America at 17.2%

In 2021, year-to-date, Ballard has received 135 orders for its fuel cell engines in the electric bus market, specifically from Wrightbus and Solaris in Europe. The company delivered around 50% of these engines in Q1.

Additionally, Ballard has entered into a strategic partnership with Linamar to develop and sell fuel cell powertrains and components for light-duty vehicles, initially in Europe and North America.

The company stated, “In the starting phase of work under the framework agreement, a demonstration platform with a fuel cell powertrain solution will be co-developed, with Ballard providing the fuel cell subsystem and Linamar providing the rolling chassis, tanks, enclosures, cradles and other balance of plant. Following successful testing of the demonstration platform, Ballard and Linamar expect to form a joint venture”

Ballard has a 49% stake in a JV with Weichai Power in China. In FY21, Ballard is expected to contribute $11.4 million to this JV. The company is currently pursuing technology licensing and transfer opportunities in China for local manufacturing of its hydrogen fuel cell modules and stacks. Weichai intends to manufacture and supply at least 2,000 fuel cell modules for commercial vehicles in China by next year using Ballard's Power Systems technology.

Similar to PLUG, Ballard has signed a Memorandum of Understanding (MOU) with Chart Industries to develop a solution for the storage and vaporization of liquid hydrogen in heavy-duty vehicles.

The company is also looking at the upside potential of using hydrogen fuel cell engines in powering mining mobile equipment through its membership in the Hydra Consortium, which includes Mining3, a research organization in the mining industry, and ENGIE, a provider of low-carbon energy and services.

Ballard’s fuel cell modules will power a switching locomotive for Sierra Northern Railway in Northern California and the purchase order is expected to come by the middle of this year. (See Ballard Power Systems stock analysis on TipRanks)

Earlier this month, Roth Capital analyst Craig Irwin downgraded the stock from Buy to Hold and also lowered the price target from $32 to $15.

The analyst wrote in a note to investors, “While this is not final, it appears that Shandong Province, where Weichai is based, has been left off the list of first Chinese fuel cell demonstration cities. That means it is likely Weichai/Ballard will have delayed access to the China fuel cell subsidies. This coincides with the large 1Q21 revenue miss driven by Weichai revenue down ($8.7m) or (65%) Y/Y. We would look to revisit our rating after Chinese fuel cell subsidies potentially start flowing to Ballard and its partners.”

Shares of BLDP have jumped 14.7% in the past five days.

Consensus among analysts on Wall Street is a Moderate Buy based on 7 Buys and 6 Holds. The average analyst price target of $24.73 implies 51.3% upside potential to current levels. 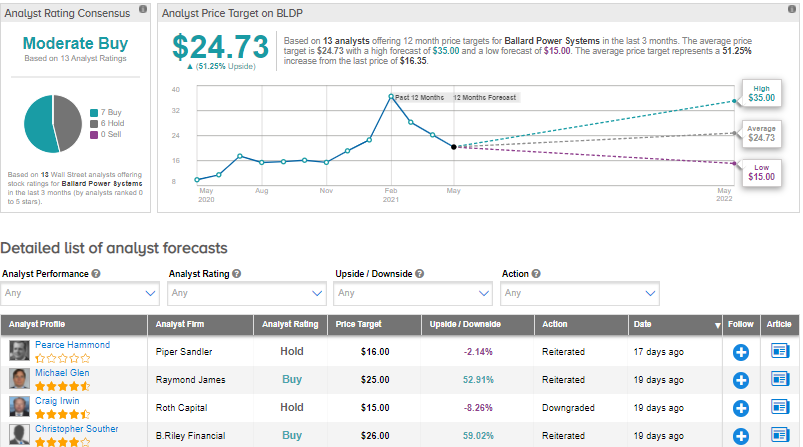 While analysts are cautiously optimistic about both PLUG and BLDP, based on the upside potential over the next 12 months, PLUG seems to be a better buy.